Does Virgin Email Filtering Work - ever?

I get spurts of scam emails, which I try to eradicate.

Let's say that they all contain the following phrase

If an email's subject looks like that, or has any subject containing >> I just want to reject it - never know it was there - and ideally let the sender know that it hasn't landed by sending a rejection which just contains a full stop. (It must have a mandatory message for some reason). But the rejection message isn't vital.

I've tried blocking emails using the following filters - all of them I think - but none works.  Is there any way of doing what I want?  Some of my tries have been ...

and lots lots more.  Does Virgin Media filtering do anything?

Copy and paste the subject text here as it is likely the miscreants have used lookalike unicode characters to bypass your filtering attempt.

Thank you for your interest, but I don't quite understand what you mean.  Is this what you want?

Or perhaps you mean this, which has come directly from an incoming email?...

Consider create the following filter rule to visually verify if it matches the subject of a message delivered to your inbox: 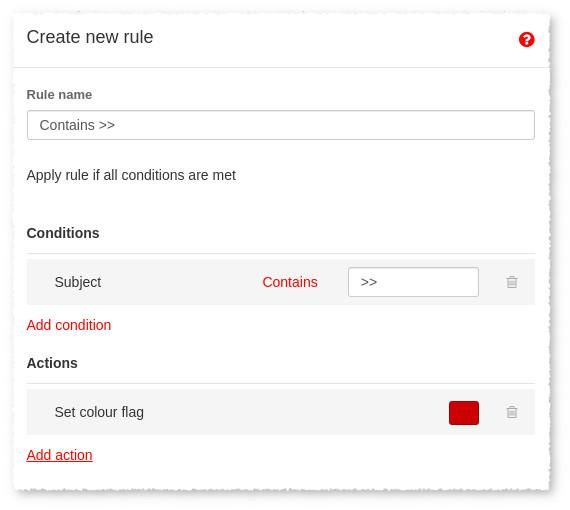 Resulting in a matched message appearing with its flag set to a red colour (highlight below):

You can test the filter rule by sending yourself a message that contains >> anywhere in its subject.