Hi. I decided to open a collective thread for UDP issues on SuperHub3, as it seems that many users are pestered by them, the impact is high and Virgin Media is not aware or fails to acknowledge the issue so far (they've been trying to fix my issues for a past year and nobody ever suggested that this has anything to do with UDP packets, until i found whats exactly the issue on my own).

This is the main thread for those issues was this one: https://community.virginmedia.com/t5/Speed/My-350Mb-connection-is-throttled-to-10Mb/td-p/3953746/pag... but it was originally created over a year ago and has a slightly misleading title.

What we know so far:

1. The issue only occurs on SuperHub3 (and reportedly on SuperHub4) modem. SuperHub2 users are not affected.

2. The issue occurs if an app/service is using an UDP connection to the internet. Examples of such apps: BBC Iplayer app, most online games, Microsoft Teams, Skype, third party VoIP apps, all kinds of VPN apps, torrent download apps.

3. All UDP connections are performing very badly on Superhub3 modem, but also whenever there's a significant UDP traffic passing through the modem, other, non-UDP internet connections are slowed down to crawling speeds.

4. Depending on an user, the reported slowdowns are to between 10Mbps and 2kbps (!) speed measured through Speedtest. At the same time ping times go up all the way to 2000+ ms and huge packet losses (sometimes over 40%) occur. In other words, even web browsing is not possible if there's a significant UDP traffic going on through modem.

5. VM street level fixes do not fix the problem - i had a whole uplink cable between CATV manhole and Virgin Media cabinet replaced by VM and it has not fixed the issue.

6. Replacing a modem does not fix the problem either - replacement SuperHub3 modems also have same issue.

7. Here's how the issue looks like on ThinkBroadband/Speedtest with just 1Mbps of UDP traffic flowing through the modem: 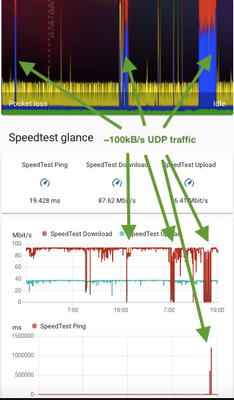 It's really sad, that Virgin Media fails to acknowledge this problem, as hundreds, if not thousands of people may be severly affected by it. The advice VM is giving out to the users is unhelpful and sometimes harmful (I've been told i need to chase the walls in the newly refurbrished house to replace my VM cable and desperate to fix the problem I have done that). Just look how many threads are being open on this forum describing similar issues with apps using UDP connections.

MikeRobbo
Alessandro Volta
5,125 Views
Message 2 of 160
Flag for a moderator

Will these UDP issues happen if the Hub is in Modem Mode with a third party router is used ?

MikeRobbo
Alessandro Volta
5,114 Views
Message 3 of 160
Flag for a moderator

Will these UDP issues happen if the Hub is in Modem Mode with a third party router is used ?

Yes, actually many people reporting it in the orginal thread were saying that switch Modem Mode OFF slightly improves the situation.

I havent tried that yet, as my network is quite complex. But in the past i have tried different firewalls/routers (Pfsense, OPNsense, Untangle) to check if it's not a router what's causing the issue and it's not.

I can only think about two possible fixes:

2. Set up a VPN account on a public VPN server which supports TCP-only tunnels (Mullvad for example), change VPN settings to TCP only and route all your network traffic (or just UDP traffic if you can set up such routing) through that TCP-only VPN tunnel.

Today, I have spend a day testing my network connection with constant 5Mbps transfer over TCP and without any significant UDP traffic (except of ping) and havent had a single hickup of latency

Just a quick update - it seems that the issue only occurs in the modem mode.

I  have raised an official complaint with VM which i am planning to escalate to Ombudsman if VM wont be willing to acknowledge the issue.

MikeRobbo
Alessandro Volta
4,767 Views
Message 7 of 160
Flag for a moderator

Apart from the complaint that you have put in; have you communicated the problem to VM ?

legacy1
Alessandro Volta
4,738 Views
Message 8 of 160
Flag for a moderator

I thought this was fixed!

@MikeRobbo yes, VM was trying to troubleshoot the issue for last year, replacing a big chunk of their street level infrastructure a all of my in house equipment in the process, but never suggested that the problem may be caused by UDP traffic or modem being in modem mode.

My setup isn't standard. I recently was upgraded to Gig1 (or whatever it's called). That comes with a Hub 4. With my Hub 3 setup I had it in Modem mode and my main router was a Linksys WRT32x with OpenWRT firmware. Anyway I thought I'd give the Hub 4 a chance. That lasted 2 days and I put it in to Modem mode and brought my Linksys back out.

I was also given a set of Virgin wifi extenders.

Setup is now a Linksys WRT32x flashed with the latest OpenWRT as my main router and the Virgin wifi extenders in operation.

I have tweaked the channels to ensure they are out of range of other devices in the street. I have ensured that both the main hub and wifi extender are set with the same channels and frequencies. I also have my SSID's split between 2.4ghz and 5ghz with the same SSID set on hub and wifi extender. When I run something like NetSpot and move around the house I can see the device seamlessly moving between hub and extender depending on where I am in the house.

So I thank you for this thread. Will save me hours tinkering around if thye broblem is outside of my control.