I hope you're right, davefiddes!

Don't be too harsh on the pessimists though.  I expect that they just don't want to get burned by Virgin again.  Bleak precedent is certainly on their side, so I think their caution is understandable, after this very long and painful wait.

I choose to be optimistic about it once more, inline with what I'm seeing on APNIC stats.

I really want us to get beyond the phase of fighting ISPs for IPv6 and into the war against Internet sites who haven't yet started a transition.  Provision of native IPv6 nationwide by UK ISPs is a necessary precondition for this next phase.

Yes. Long way to go on getting services, protocols and content providers IPv6 enabled. It's just not part of everyday engineering practice yet. 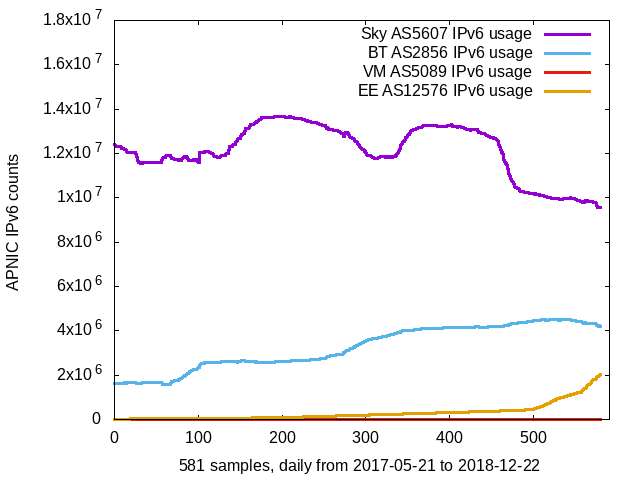 It was only 6 weeks ago that I was congratulating UK mobile network operator EE Limited for reaching the 1 million mark on daily IPv6 usage as counted by APNIC. Today (22 Dec 2018) they're already zooming past 2 million (2,011,738)!  These folks have warp drive engaged --- it's the highest rate of IPv6 growth in the UK at the present time.

Good news indeed. According to the update at the IPv6 Council meeting it's been down to the deployment of iOS 12. This seems to have 464XLAT support for tethering which was the last piece of the IPv6-only puzzle EE needed (apps have been IPv6-only capable for some time now).

That's very interesting, thank you davefiddes! It's also a bit unfortunate for EE though if they are so dependent on a single 3rd party handset provider.

Thinking about Virgin's forthcoming IPv6 service, I can't help wondering what IPv6 usage counts Virgin will be clocking up on the day that IPv6 is released. APNIC gives us a number of stats in addition to IPv6 counts, and one of the more important ones is total usage count (which APNIC labels as "Users"), meaning the sum of IPv4 and IPv6 counts. If we plot (Total_Users*100/IPv6_Users) we get a very interesting graph of percentage IPv6 normalized to the size of an ISP's population: 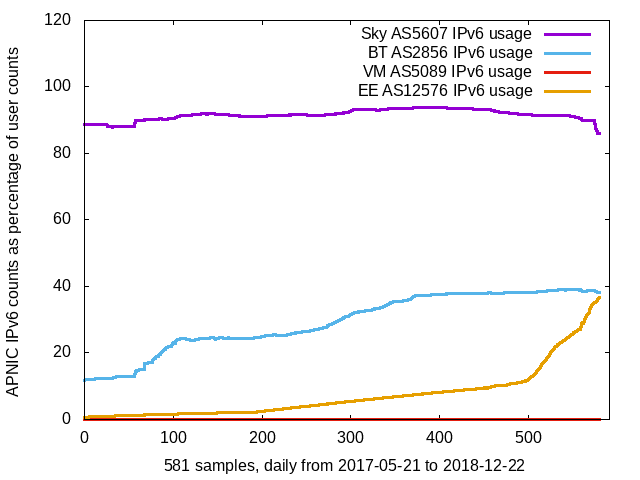 From this we see that Sky's bumpy IPv6 curve straightens out beautifully quite close to 90%, so it's clear that Sky's service is almost completely IPv6-based now and the fluctuations in IPv6 counts just reflect the varying size of their customer base. It also reveals how badly BT's IPv6 usage is impacted by not being able to run IPv6 on their older Home Home 5, which is still their most widespread CPE. This problem is probably what's denying IPv6 to some 60% of BT's customer base.

And so, it makes me wonder what to expect on the graphs when Virgin takes the curtain. If VM rolls out IPv6 to Hub 3.0 and all later equipment then I think Virgin is going to be really high up on both graphs alongside Sky, leaving BT and EE far behind. The normalized percentage graph will tell us how widely Virgin's CPEs can accept IPv6-capable firmware.

It's going to be very interesting. 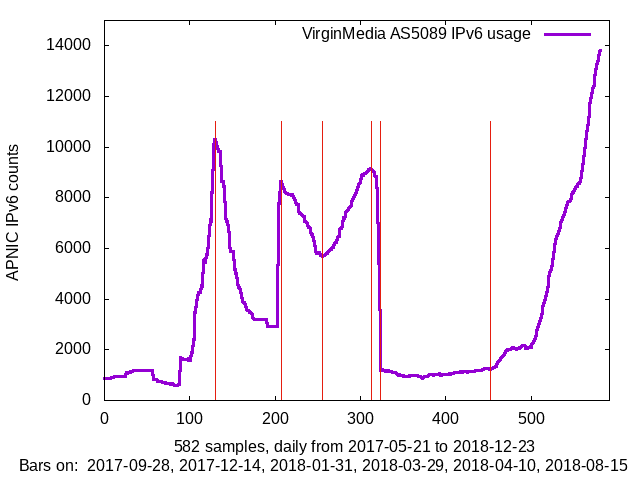 ♫♫♫ Merry Xmas to all of the community's exceedingly patient IPv6 followers and contributors. ♫♫♫

"If it only does IPv4, it is broken." -- George Michaelson, APNIC.
3 Kudos
Reply

♫♫♫ Merry Xmas to all of the community's exceedingly patient IPv6 followers and contributors. ♫♫♫

I would say that it is like being on on the way up on a new roller coaster at somewhere like alton towers. I hope the ride will be better than anticipated ;-).

Merry Christmas to you and everybody else here, too.

Cool. Network, apart from CPE, has been ready for nearly a year now. Trials on the 'private' cable network, the 10. addresses being moved to IPv6, have been a thing for a while. Great to see prefixes starting to be advertised .