They have a lot of announcements that look like this:

which is 65k IPs, not 131k. If you remove all of the overlapping announcements then I make it about 8.3 million IPs. bgp.he.net says "IPs Originated (v4): 9,471,488" including all of the customer prefixes, so that looks about right.

Comparing that 8.3 million figure vs your 14 million estimate... yeah. You didn't even account for infrastructure address use or allocation inefficiencies and you still ended up with an estimate that was 1.7x higher than the address space they have available. And you wonder why they want CGNAT?

Perhaps my understand of networks is just quite poor then, but why should any of the internal infrastructure (not connected to a external provider) use a public IP?  I know a lot of the Microsoft switches for years now would show their private IP because the internal network didn't have Public IPv4's attached to them.  VM should admin all of their equipment using a 10.0.0.0/8 assignments.  Allocation inefficiencies will be high, BUT, 4over6 could be used to localize a lot of the exit points and help get rid of much of that wastage right?  Sure they will need other servers (DNS/MAIL/Whatever Else) but in the scheme of things I would think that would be quite small, like in the 100's of IP's.

If your telling me that 26 million IP's can't allow a ISP to run more than than about 6 million customers then that makes me really scratch my head about how poorly these things are working.

----
I do not work for VM, but I would. It is just a Job.
Most things I say I make up and sometimes it's useful, don't be mean if it's wrong.
I would also make websites for them, because the job never seems to require the website to work.
1 Kudo
Reply

I'm telling you that they don't have anything close to 26 million IPs. You double/triple counted overlapping announcements.
0 Kudos
Reply

Okay, I see what your saying now.

My guess on the 14 million was making the assumption that the STB received a public IP (does it, did it?).  Even if it does, the old STB should work fine under CGNAT (from what I know of them).

And what about the mobile network, are those CGNAT or not (I know EE is, but my Three sims aren't), I don't have a virgin mobile so cant check.

They did say in the past they wouldn't look to deploy IPv6 until IPv4 ran out, to me the two were separate, but If your saying that they have ~9 million to spread around mobile (non cgnat) and home broadband then that would mean they have ran out of breathing room.

Although it's useful to know roughly how many IPv4 addresses Virgin has available, I doubt that it matters at all in terms of deployments, because the vast majority are sure to be sold off while the market price is high --- currently around $18 per single address, I read.  The attraction is irresistible, and cashing in on it is made somewhat urgent by knowing that the price will plummet once IPv6 is the majority protocol and IPv4-based companies start bringing up IPv6 in panic.

Unlike many non-ISP companies out there, all ISPs know that IPv6 is creeping up on them even if they haven't yet deployed it to customers, and for an ISP it is not a viable option not to deploy if they want to stay relevant.  Alas for an ISP, running dual stacks internally is about as welcome as a hole in the head, so they also know that their long-term direction is towards IPv6-only internally plus IPv4 gateways at the edge for backwards compatibility.

There will be exceptions to this appealing organization of course.  Quite a few ISP businesses fill a specialist niche rather than the mass public one, and some will find a good role supporting the long tail and extra costs of IPv4.  Not the mass public ISPs though --- it's far too painful and costly in terms of both manpower and equipment for them to do so.  Even worse for the medium term, it limits the speed at which they can evolve.

And so, while I like having numbers and stats on everything, I think that the number of IPv4 addresses at Virgin's disposal will mainly determine the extra profit that will appear on their ledger from the sell-off of excess IPv4 address blocks.  An estimate of the IPv4 addresses that they will need overall is probably well known to them (current session stats minus the number of IPv6-capable destinations), but how many they will need to satisfy those IPv4 users who can neither move to IPv6 services nor use tunneled IPv4 is an extremely hard estimation to make with any confidence.

One thing is certain though --- the number of people unavoidably tied to native IPv4 can only decrease with time, and that is probably a very welcome realization for Virgin.  It means that they can err on the side of retaining fewer rather than too many IPv4 addresses, because time will heal any miscalculation.

Another interesting conclusion is that Virgin is probably quite eager to release IPv6 onto us so that they can know with accuracy how many IPv4 addresses they definitely cannot sell off at this point in time.  Factor in a safety margin and the rest of their IPv4 blocks are pure profit.  Clearly the earlier they know their numbers the better. 🙂 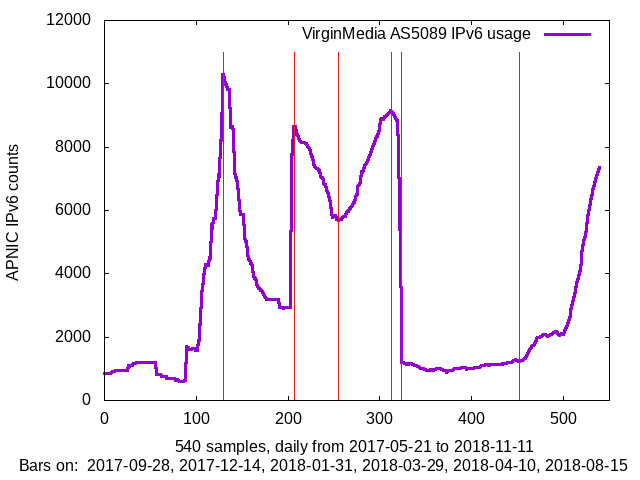 There's not really much to say.  IPv6 activity is still growing at its previous nearly-constant rate, probably related to equipment rollout since populations of people don't usually expand at such a linear pace, but it's just speculation.  We might get a hint of what's behind it when the curve changes.

@Morgaine I think that the slow ramp up is just an artifact of the advert based sampling method that APNIC use. We saw this in the retrospective talks from the Sky team where there was a distinct lag in the numbers reported by APNIC vs the more direct measurements from the likes of Akamai and the Internet Society. I would suggest that they switched on this trial is two batches, one small (1000 users?) then the rest (9000ish users?). If they had all the participants and infrastructure lined up and ready making a new trial live wouldn't have been the same level of work once they were ready to start. Of course getting to the "ready to start" point is where all the work goes...

I'm not convinced that there is a significant lag in APNIC's readings when averaged over a day.

We have evidence of their close-to-instantaneous response on the graph at the 2nd red bar (sudden rise at 2017-12-14) and 5th red bar (sudden fall at 2018-04-10) -- at this x-resolution they are both near-vertical lines. When an IPv6-enabled population of people already exists, APNIC seems to detect the change in the number of addresses used very promptly when the IPv6 provisioning is switched on or off. And conversely, looking at the slow and fairly linear fall in IPv6 activity before the 3rd red bar (2018-01-31) and the similar slow rise in counts after it, it's clear that some kind of operations within VM can produce slow linear changes in the measurements too.

It's very hard to attribute causes to these observations with confidence, but I think we can definitely say that there are two distinct types of change in IPv6 activity observable by APNIC and actually being observed at VM.

The slow ramp-up could be explained by a need to reboot the cable modem/router to get a v6 address. If VM forced reboots on the affected customers then you'd get the on/off steps in the graph, but if not then you'd see the slow increases/decreases.

As for set-top boxes, I was under the impression that they only had an IP from the management network, which is RFC1918. That means they won't need public IPs... but it is worth remembering that RFC1918 is only about 18 million addresses, which starts to look rather small when you need to assign management addresses for all cable modems and all (legacy) STBs, plus network infrastructure and also all company-internal networks, especially when Project Lightning means they also need to plan for significant growth. RFC1918 isn't a magical fix to everything.

(In principle you could run two separate instances of RFC1918, but the administrative overhead of that is very non-trivial and it's something you really want to avoid doing. Comcast in the US actually started using public v4 space for their management network to avoid doing that.)

Well I would certainly empathize with VM engineers if at some point they decide(d) that they've already suffered enough pain at the hands of IPv4 and say to management "We've had enough of this, get us out of yesterday's hell please."  Even the beancounters would probably sympathize, because skilled manpower is extremely costly.

The contortions needed to keep IPv4's head above water remind me vaguely of writing applications with overlays to make them fit into the tiny memory address spaces of yesteryear.  Nobody looks back on those days with fondness.  We'll be looking back in extreme distaste at IPv4 too once the dust of transition has settled. 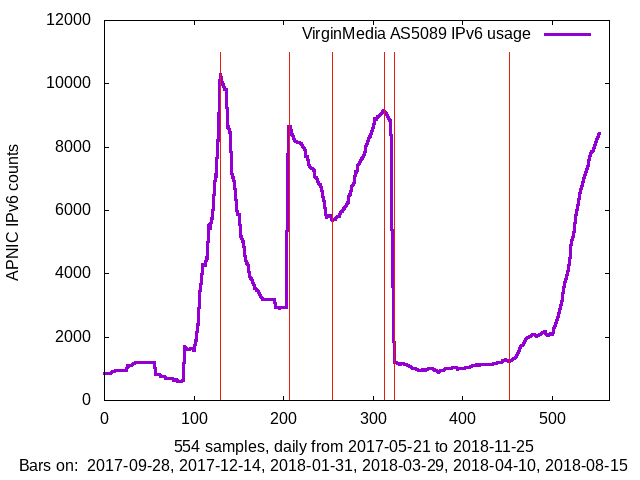 We're into the range of IPv6 counts which turned into peaks in the curve of last year and in March of 2018, so it's a pretty reasonable expectation that the current curve is destined to do the same. I suppose it's possible for this IPv6 trial (if that's indeed what it is) to turn into an IPv6 product release directly, without first dropping back. Maybe someone knows what Virgin's standard M.O. tends to be for trialed products.

The slight slowdown does mean that we won't be reaching 10,000 in November, as it seemed very likely that we would at the rate of mid-October.