VMCopperUser
Trouble shooter
660 Views
Message 1101 of 1,146
Flag for a moderator

Excuse my ignorance in all this, but if I remember correctly VM Ireland has a lot of requests to be put on IPv4 only, and I think the main driver is for gaming.

Now if this is correct and VM UK move to DS-Lite, can VM still advertise as "great for gaming" ?

Latency is the key to gaming, so xDSL tends to be better.

Users who need to host end to end connections over different ISP's might need IPv4 to connect, but that's due to other ISP users not having v6.  For those users who "need" their own IPv4 then Dual-Stack is the actual product they should get.  I too "need" IPv4 because of my SIP phones, but that doesn't mean I don't want IPv6 to roll out.  There are two issues at play, the lack of deployment of IPv6 and CGNAT, but they are lobbed together as a single problem and VM seem unwilling to roll it out.  If they really want to roll out CGNAT then they should run a large test area, the complains they get back would likely show them why it's a horrible idea.  Sadly they would likely view that as a failure for IPv6 deployment and not a failure of CGNAT.

Looks like Virgin are finally looking into the IPv6 tunnelling issues:

Yeah, I contacted Mark at ISP Review about this a few weeks ago and he actually managed to get some traction with someone at Virgin Media. I'm not holding my breath for a fix but at least they finally seem to be acknowledging there is a problem!

Interesting I also just got a connection request from Lobo Olopade on LinkedIn who's within the network team at Liberty Global and has been involved in the IPv6 deployment at VM. Possibly related to the post made in the IPv6 council group.

Glad it's been finally brought up in other mainstream tech media. I did tweet Mark at ISP Preview my article a few months.

I have just tried, but there is no change for me. I am using HE but on a VM Business connection.

Great to get some coverage. Thanks Chris and James for highlighting the problem and bringing it to ISPReview's attention.

A quick test this morning shows no change for my connection.😢

Based on VMs comments it seems likely to be months at least before any fix might be available, assuming that they do decide to implement a fix...

I've just run a test, getting these results:

Edit: Just been monitoring my pfsense router while running another test, and the IPv6 figure does indeed seem to be correct. You can see from the image below that the first burst of activity appears on the WAN interface only, the second burst also goes over the HE tunnel. 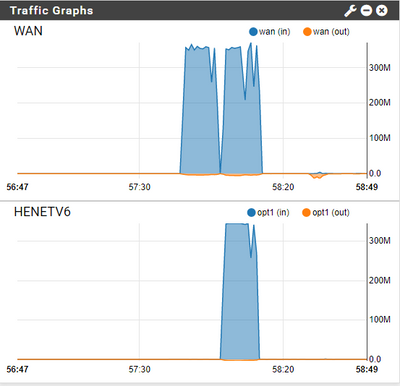 What model of VM cable modem/router do you have? Is it a SuperHub 4?