i hope virgin are ready for ipv6, i found this page interesting https://www.ispreview.co.uk/index.php/2019/10/this-time-there-really-are-no-ipv4-internet-addresses-...

That article makes it out to be worse than it is, all it means is there are no "new" blocks of IP's to be handed out, companies still have access to all their currently assigned IP blocks, and ISP's always have more than they actually currently need so it won't actually make any difference, it just means you won't get any new IPv4 companies springing up unless they are renting addresses from another company

@shanematthews You say that, but Virgin have a mere 9.5 million IPv4 addresses. With (As of December 2012) 4.2 million home subscribers (from a footprint of 15 million homes), 3 million mobile subscribers, plus business (who may want more than 1 IP address), internal infrastructure (do a traceroute and you find a handful of public IPs before you hit "the internet", mailservers, dns etc) they're probably not sitting on as many as they'd like to be!

They certainly don't have enough to sign up every property in their current catchment area, and they're looking at expanding too

According to their most recent figures they're up to 5.2 million broadband users. Worth noting that mobile isn't really worth considering due to the extensive use of tunneling and CGNAT. They're probably "OK" for addresses even at their current rate of expansion.

There has been talk recently of a significant expansion to cover 7-10 million further homes which would change the landscape significantly. That's a whole different ball game for VM especially on the finance side of things.

As we've discussed previously it seems that they could likely roll out a dual-stack architecture which would be good for some years with a soft rollout of DS-Lite for new subscribers as IPv4 addresses start to become constrained. Maybe that's what they are now re-considering...

It would likely be better if they went the other way and gave everyone DS-Lite and a easy way for users to opt out, perhaps even having hub software smart enough to see port forwarding rules set and making the switch?  Been a while since I looked, but doesn't UPC IE give cgnat to all, and those who don't want it get ipv4 only?

Technical can DS-LITE and Dual-stack run without too much of an issue?  I would think it could fit in the normal modem config.

Sounds like Virgin Media Ireland do exactly that for new connections, you get DS Lite config by default, you then have to request to be put onto IPv4 only mode, which also allows you use modem mode. Confirming that the setting can be controlled by an upstream config on the Virgin Media side if required. They could implement smarter detection into the Super Hub firmware, but given there seems to be some form of flag/setting on VM's side already, they probably won't.

Let's be honest for users who simply just plug in their CPE and go, they don't care. Does it work? Yes? Great. It's the enthusiasts in this thread who are making the noise (rightly so), because here's the sticking points:

* We want to keep our native IPv4, but you'll lose it with DS Lite
* We are still using NAT with IPv4 for one ore more LAN clients
* We have port forwarding for one more services over IPv4
* We use some form of service utilising P2P which will be broke by DS Lite

I'd imagine any IPv6 rollout that did happen to occur for the UK operations, anyone in modem mode currently would be excluded anyway, otherwise they'll break a lot of customers setups and would cause a massive increase to their support channels for the sake of a rollout.

One of the key issues with DS Lite is the support for in in aftermarket routers. Most of the OEM firmware on consumers routers won't have direct support for it. As far as I know DD-WRT doesn't have support for it. OpenWRT does through additional packages with opkg.

In the latest IPv6 council meeting Loba Olopade from Virgin Media was in attendance. The question of how their IPv6 DS Lite implementation would work with consumer kit behind their CPE, was covered off by stating you don't need modem mode to use it. This is correct, you can have multiple routers in the network and pass the Super Hub IPv6 prefix to your own kit, but this will add complexity and require a bit of knowledge with network config, where the current modem mode basically does the hard work for you albeit IPv4 only currently.

I'm not sure you can run DS Lite and a dual stack environment at the same time due to conflicting requirements of the implementations.

I found a write up from a Virgin Media customer in Ireland who talked about running services behind the DS Lite IPv6 setup, it's a few years old, but the overall network config is still likely the same.

The IPv6 prefix delegated appears to rotate, so you need to implement additional steps if you wish to open firewall ports and static DHCP leases for v6 hosts.

All of this, if it is still the case immediately makes me not interested in the IPv6 DS Lite offer (if even I decided to give up having native sticky IPv4) and instead continue using my routed /48 from Hurricane Electric where I can configure static prefixes, leases and the like. Hurricane Electric don't seem to have any issues keeping their free tunnelbroker.net service running, so it doesn't make sense for me to drop it.

The only IPv6 problem I have, is having to prevent some services like Netflix running over v6, because of the dreaded "you're using a proxy" error, but a mild inconvenience for the benefits offered.

The IPv6 council annual meeting is due to happen next month, I wonder if Virgin Media will be in attendance and if there will be any update if so.

Sure its a "mere" 9.5million, but they know they won't have every customer in their areas and customers who join and leave are keeping that number low enough to not be an issue, they can always just buy unused IP's from other companies should they feel the need but i doubt they will be in a position to need to do that for a while

The UK currently has 71 million v4's assigned to it and only 67 million residents, now assume that a fair chunk of those will be people living behind a single IP and CGNAT on mobiles and you realise that as a whole we're doing fine for v4's currently, yes its going to eventually become an issue, nobody is denying that, but its not going to be an issue for a while

I had a good giggle at the time over VMCopperUser's optimistic comment in message 796:

No such luck, the real explanation is less picturesque: my long-running optimistic disposition towards VirginMedia's forever-promising, never-delivering IPv6 progress finally ran out, replaced with the realization that they don't care in the slightest about customers' IPv6 networking requirements nor about the networking future of the country. They are abusing us, and they are holding back Britain's online capabilities versus the rest of the developed world. Our experience here suggests to me that this doesn't bother them at all, because otherwise this abuse wouldn't be happening.

Judging by the evidence, I believe that all they care about is their own media content delivery. and it's this navel gazing that makes them see no urgency in IPv6 deployment since they don't recognize anything of value beyond provisioning their own TV and telephony. It's probably accurate to say that VirginMedia is not actually an ISP: instead it's a Media Services Provider masquerading as an ISP so that they can earn extra income from cables that would otherwise only carry their own content.  A true ISP would do everything in its power to advance the networking capability of its subscribers.

So, I now see them as an obstacle to IPv6 deployment in UK, and wherever possible I recommend people to use "real ISPs" that don't sacrifice progress in networking to the gods of media/TV provisioning.  Good examples are AAISP, Zen Internet and even BT, plus of course Sky demonstrates very well how you can be a strong media company without holding back your customers' IPv6 capability.

I notice that people have mentioned expressing their concerns to the Ombudsman or to Ofcom, and indeed such negative feedback is very important since it is clear that forum feedback is completely ignored.  This leaves customers with no option as stakeholders other than to use external complaints procedures.  Letters to business media and to consumer programmes on TV could be useful as well, since they are more likely to be seen by VM management than this community forum or any more technical channel.

Have a great day, everyone. 🙂

Sunday "once in a blue moon" update on IPv6 deployment in the UK by our Big Four ISPs: 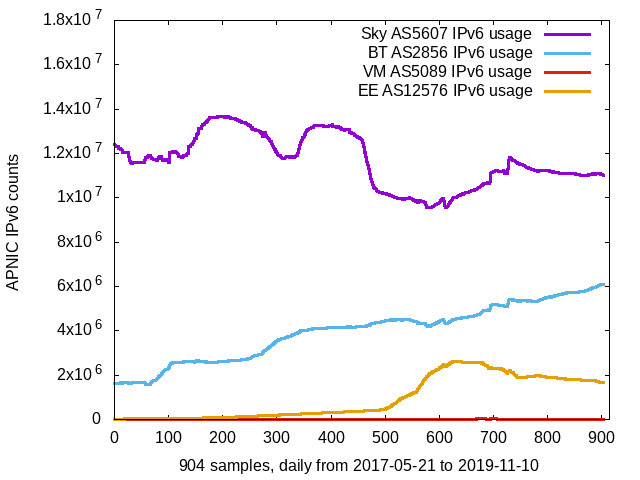 And here is Virgin's IPv6 usage in greater vertical resolution to distinguish it from zero:

And lastly, Virgin's actual IPv6 counts from APNIC for last week.  Unfortunately, nothing to be happy about:

"If it only does IPv4, it is broken." -- George Michaelson, APNIC.
3 Kudos
Reply

Good to see you back Morgaine.

I share your pessimism about VM's motives. Seems that they definitely see broadband as a mechanism for content delivery rather than as a service in its own right. IMO they should be split up. Internet service provision is a utility like power and water. We don't buy our TVs and hot food from the electricity supply company. Doubt it'll happen anytime soon.