Cool. Network, apart from CPE, has been ready for nearly a year now. Trials on the 'private' cable network, the 10. addresses being moved to IPv6, have been a thing for a while. Great to see prefixes starting to be advertised .

Thanks that is good to know. There are also two IPv6 BGP peers now. The same two prefixes have been advertised for quite a while now.

For VMB users, I'm wondering whether VM is going to tunnel IPv4 over the IPv6 with GRE. So business users won't be using CG NAT and residential users might have to swap to business to retain the full NAT capabilities.

And will IPv6 basically become static ie each user is assigned a static IPv6 allocation rather than a dynamic one? Alleviating the current static/dynamic choice.

Could the pricing tiers change due to this? eg 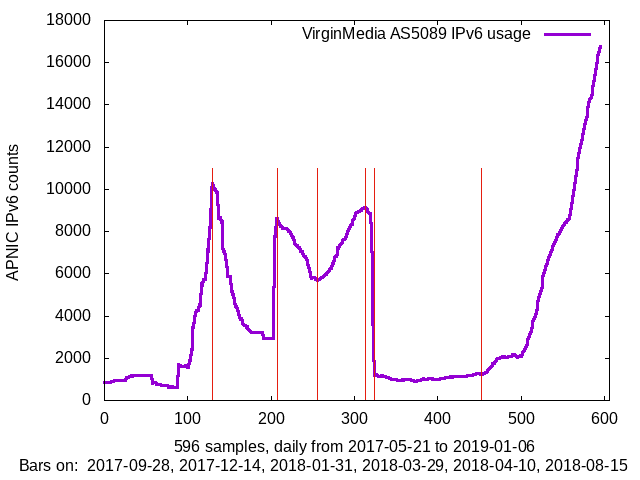 So, here we are, 2019 and still no IPv6. It would be nice to think that the release of an IPv6 service is imminent, but Virgin has ignored our hopes so many times before. If anyone sees other indications that something is stirring in the wings, it would be nice to hear your thoughts.

By the end of March, this thread will have been going for nine years.

Best not to rush things...

Well, the count is definitely climbing on a daily basis. I suspect by tonight it will hit the 17k mark. Quite what that means is anybodies business as some of the previous graphs look like my bank balance after the wife has got hold of my debit card!!

Well, the count is definitely climbing on a daily basis. I suspect by tonight it will hit the 17k mark. Quite what that means is anybodies business as some of the previous graphs look like my bank balance after the wife has got hold of my debit card!!

I agree with the graph vs wife with debit card

I would also like to place a bet of 50p that the switch has been flipped. I wonder what the odds are.....

Depends on what you mean by "flipped the switch".

If you mean that VM has an internal date for official release of the IPv6 service, it's possible, but the same could have been said before in earlier years and it didn't materialize.  On the other hand, if you mean that the current growth curve shows that it has already been released but slowly, then my guess is that it's a "No".  The reason is that the numbers we are seeing are too small to support that theory.

I don't know how many of those numbered areas or districts of operation Virgin has, but all of the ones I've seen mentioned have had two digits, so a reasonable guess would be that there are fewer than 100.  Doing a ballpark guesstimate --- 5 million subscribers, 100 districts, one PoP per district --- gives us 50 thousand subscribers per smallest increment (turning on just one PoP at a time), whereas the daily increments that we're seeing are over 100 times smaller than that.  So, the current figures don't support a theory of "it's already running in the wild".  In any case, if it were already available in a limited area, someone would be reporting that they have IPv6 on their CPE, but they haven't.  My guess is that VM IPv6 is still limited to a small-scale secret trial group.

CarlTSpeak
Community elder
2,156 Views
Message 718 of 926
Flag for a moderator

Regarding CG-NAT, sure they're going to do that? Could be using IP-in-IP?

Would require a horrendous amount of resources running everyone through a NAPT AFTR.

Lightweight 4over6 might be a plan, too, can present public IPv4 addresses.

• Liberty Global running DS-Lite in all of their countries but something different in UK seems extremely unlikely.

• How IPv4 is provisioned within a native IPv6 deployment doesn't affect the IPv6 numbers that we're seeing.

• I think it's a reasonable guess that Liberty Global / Virgin beancounters will be going for the least costly option.

• Deploying DS-Lite now would allow them to profit from their excess IPv4 addresses before world prices tumble.

Given the above, I don't expect Liberty Global's IPv6 deployment in UK to be any different than elsewhere.

"If it only does IPv4, it is broken." -- George Michaelson, APNIC.
2 Kudos
Reply
Highlighted

CarlTSpeak
Community elder
2,010 Views
Message 720 of 926
Flag for a moderator

Thanks for the detailed response!