Sephiroth
Alessandro Volta
17,574 Views
Message 1 of 1
Flag for a moderator

WiFi is a somewhat notorious, though essential commodity. In many cases, when its behaviour does not meet the user’s perception of the claims made by the ISP (e.g. Virgin Media), the blame is quickly heaped on the ISP’s router (e.g. Superhub 2/2ac, Hub 3.0).

Disregarding the obsolete Superhub 1, the Virgin Media hubs are constructed and certified to the WiFi Alliance standard.  This means, that apart from faulty devices, they broadcast WiFi signals as powerfully as any other router operating to the same standard (e.g. ‘N’, ‘AC’).

Fairly obviously, signal strength (power) must be ultimately measured in Watts. Given that a toaster, for example, consumes 2kw (kiloWatts), WiFi power levels need to be harmless and are prescribed in each country by regulation.

In the UK, the maximum permitted transmit power expressed in mW (milliWatts) is:

dBm is not a linear scale; it is logarithmic.  Without going into the mathematics, this is illustrated by the following simple table:

Below is a table generated in Excel that takes us closer to understanding what measurement apps such as inSSIDer report.

Next, we’ll consider at what signal strength things can be done on the Internet over WiFi.

Most users of inSSIDer or similar analysis tools will have seen the dBm readings.  They will also know that as distance increases from the hub, or as walls intervene, the WiFi power falls (to a larger negative value).

So, how far can you go and what can you do with your signal level? We’ll deal with “how far you can go” in the next section.

Below is a table showing the signal/power levels and what you can expect to do in those circumstances.

The table below describes how common/household materials can affect the WiFi power level.  Acknowledgement is made to physics.stackexchange.com.

Now let’s examine a theoretical house. In the next diagram, A is the equivalent of a concrete wall; B is the ceiling/floor made of plasterboard & wood; C is a plasterboard wall. 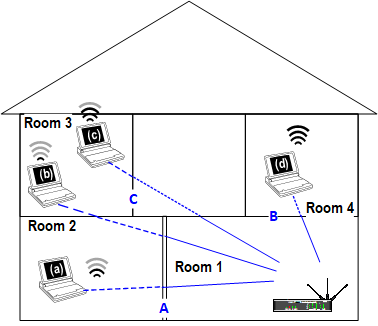 The diagram is reasonably self-explanatory (acknowledgement to zen.co.uk).  However, there are points of note that should make sense to some frustrated home users.

Without knowing the foregoing information, the WiFi user might well be tempted to blame the hub for their WiFi woes. The signal strength at the WiFi client is the most important driver for satisfactory WiFi.