So to be clear the speed will drop down to 6M later today, it appears to be around 50Mbps speed and jumps up to over 100Mbps once I do a reboot.

Network logs below: Note the VM guy had be doing all sorts yesterday so there might be some errors from that.

To clarify, my speed tends to drop to 6M several after rebooting the router and being at over 100M. Right now it's 52Mbps, but as soon as I reboot the router it goes well over 100Mbps.

But are these measurements over WiFi or wired connections?

Nothing at all in the stats to indicate a problem. Can you posts your logs.

Unfortunately (OP)Alexis uploaded 2 screen captures of network log which system/mod/fellow SU has rejected as it includes "Mac id's". of her CM/Hub and  Asis E6000 CMTS provisioning server.  I don't have time to edit these personally at the moment and re-post but last RCS. error appears to be 14/5 and. as U/S levels (and D/S post pre/post RS) look ok then I suspect   there may have(or still) been some intermittent SNR/FEC issues locally.

Question( confusion) I have is Alexis originally. stated she is on V200 Tier yet only complaining about. restoring. to >100mbps?  Probably best for Alexis to clarify the outstanding WiFi/Wired Query and Post the Hub3 Configuration file:  V200/12 eg

OF course apart from the vagaries of. WiFi then even Ethernet connection can vary depending on resource/configuration of the end device hosting the "speedtest.net" client. eg here's a SamKnows example of my. current V200/12 and using worst  case "single thread" we can see D/S "advertised percentage" dipping to  50% minima.  These techniques(comparisons with multithreaded) are crude indicators of "utilisation/congestion" issues but I say "CRUDE INDICATORS" because further discussion is(to put it. brutally) way-out-of-scope of majority of users. and I've digressed too much already! 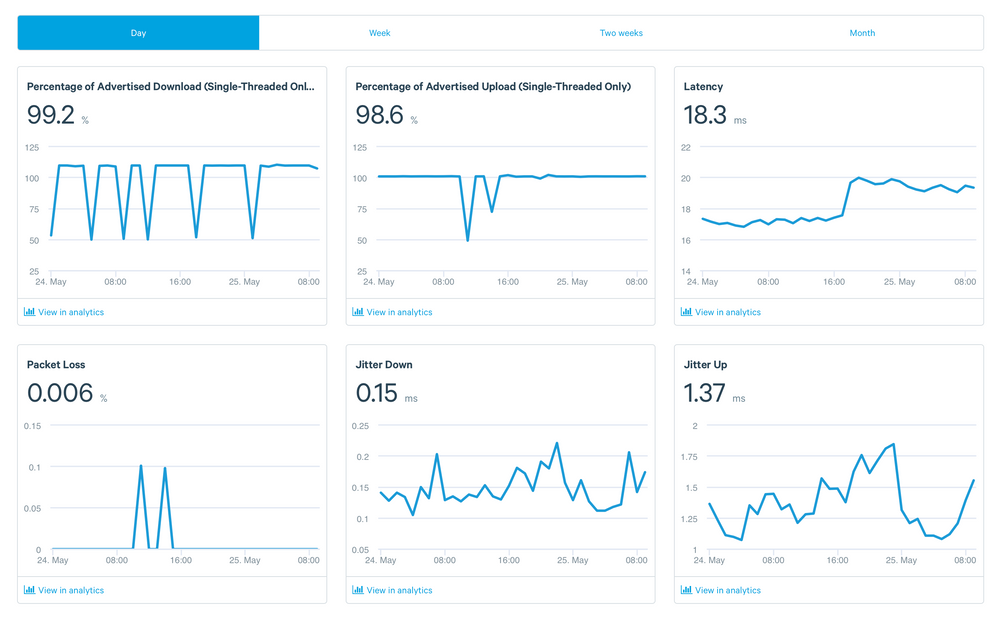