Why Not Tell The Truth?

There is currently a problem with broadband in the DY8 area. I first became aware of it on Saturday morning, although it may have begun on Friday according to some reports.

Download speeds are slow, maybe 10Mbps. Upload speeds are almost non-existent. According to your service desk the estimated fix date is DECEMBER 14 (9 days from the original fault.)

Your fault status line says that this is an "intermittent problem." I can assure you that this is a permanent state of affairs. It also describes it as a "really complex issue", and invites us to request SMS updates, which I did on Saturday. I haven't received one text message, and the fault status line message hasn't been updated.

According to your service status page as of 7:09 this morning there are "No known issues". I've attached an image to confirm. 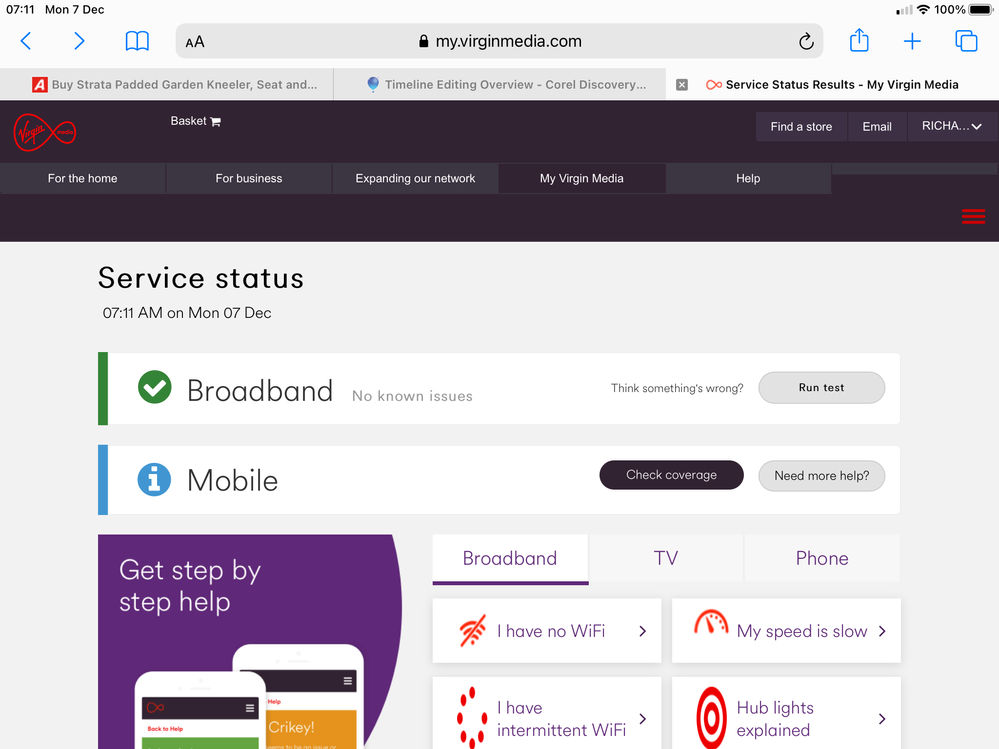 That fault status also says "our engineers are working hard to fix this". From my perspective (and, I'm sure, that of the other customers affected by this) they are doing no such thing.

The service desk has been swamped with calls and long queuing times all weekend. Is it any wonder when all other avenues are utterly pointless? Surely it is in VM's interest to use and update your systems properly to avoid this scenario?

Is it really so much to ask that you treat us with respect and do the right thing? More to the point, why is a communications company so woefully bad at communicating?

I've gone through this tango myself, and from speaking to someone on the phone the other day, they categorise all faults into 4 levels - P1 through P4. Only P1 and P2 faults are published on the Status Page - whereas P3 and P4 faults are not. If you're like me and suffering a long-term area fault such as overutilization, that is normally classed as P3 or P4 and won't ever show on the Status page. They only seem to classify netsplits and other outages as P1 or P2.

That implies that Virgin classifies utilisation faults that affect users' speeds and pings as "unimportant" and not worth fixing, despite the fact it constantly affects a customers' usage of the service. I've had problems with load balancing and utilisation on and off for 3 years now. But since March of this year, it has been almost unusable for anything other than basic browsing.

I've had a fault open for our area since April. Upon speaking to support on Friday, I've been told the resolution is now the 24th of February. So almost an entire year of degraded service. Not worth the £74.99 I've been paying since June, nor the £82.99 I was paying before that.

The problem is money.  Overutilization may go away if we all return to working in the Office etc.  It's a fine balance between losing customers and budget.  Why spend big money to fix overutilization if it's not needed in a couple of months time.

over utilization is a problem as the network only has a fineite amount of bandwidth.
That bandwidth is shared between more users that can get the bax speed

For example 1gbps may be shared between 20 users. If everyone wants the 1gbps at the same time you can't get it.

This is also down to customers that want everything for nothing so ISP have to balance the cost charged to the customer with the cost to supply the bandwidth and network hardware.

This is not utilization strictly, although that is now exacerbating the situation. We had normal performance right up to this weekend when everything fell off a cliff. Even 4G is bad now - not sure whether that's connected technically, or simply that more people are using it because they can't use broadband.

As best I can make out from support, one of the network components in the area is spewing out huge numbers of packets so it's a bit like a DDOS attack. They have to find which component is causing the problem, akin to a needle in a haystack. I get that and understand it's hard - been there, done that, got the t-shirt.

That's not what I'm talking about. The issue for me is that they do a really poor job of communicating what's going on in these situations. This is a serious problem affecting multiple users in a fairly substantial area, yet they see fit to pretend that nothing is wrong, and provide no information to the people affected.

Quick update on this. The service status was finally updated to show estimated resolution of today at 15:00. That came and went with no updates. The service status has now been updated to show that there are "no known issues" again, but clearly there are still huge performance problems. Upload to speeds are less than 0.1 Mbps so even with decent download from time to time it makes the whole thing very slow.

The telephone service status is still reflecting that there is a problem. Then again, it's still repeating the same message that was published on Saturday, so clearly that is useless information.

Like I said before - utterly woeful communications. Not even a remote attempt to offer something to indicate what is going on.

Try a reboot to see if the Hub can renegotiate a better connection using this method ...

Switch the Hub off using the small switch on the rear of the Hub next to the power cord and pull the PSU plug from the wall socket.

Give it a good 5 minutes put the plug back in and switch the Hub back on.

Allow the Hub a few minutes to fully restart then try your connection again.