legacy1
Alessandro Volta
1,162 Views
Message 21 of 36
Flag for a moderator

I'm on 70Mb with VM and I try the 24hour test at CyberGhost bypassed my QoS and a Speedtest By Ookla got 70Mb. I also noted that the VPN is by UDP by port 443.

Yeah I have tried both UDP and tcp, also all protocols open VPN and others, bit getting same results on both vpns. It seems to me that Virgin Media are throttling some users only on UDP and TCP connections

DreamOfCheese
Rising star
1,124 Views
Message 23 of 36
Flag for a moderator

I've currently got access to a Windscribe subscription, I've been running some speedtests over it using OpenVPN UDP AES-CBC.

The UK servers for Windscribe all seem to be run by differing dedicated server providers, however one thing they all have in common is that they all exit the Virgin Media network (for me at least) via "tcma-ic-2-ae9-0.network.virginmedia.net", as they all have this in common it means they'd all be subject to passing through the same Virgin Media owned hardware before exiting.
This fact means any deep packet inspection to enable traffic management would be applied to all of the servers, and not just one or two. Keep this in mind as it's important. 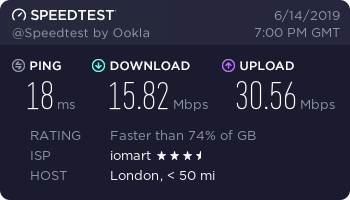 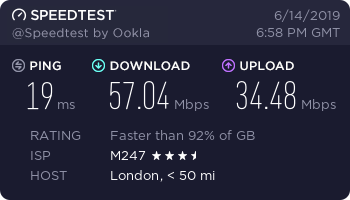 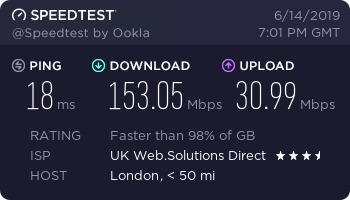 The above three speedtests are all done to VPN servers run by the same VPN provider, the M247 and UK Web Solutions Direct servers are both transiting from the VM network onto an M247 network, the iomart one is transiting on iomart's own network. All three are going through exactly the same VM hops on the traceroute, 1 being my router and 6 being "tcma-ic-2-ae9-0.network.virginmedia.net" logically this makes it incredibly unlikely to be VM acting as the bottleneck or throttle point here.

Interestingly the UK Web Solutions Direct one (the fastest of them all) was the only one Speedtest.net detected as being a VPN, and the speeds with the ones that test badly were very unstable suggesting overselling or running the links hot.

Here is what I'm seeing without a VPN via speedtest. I've selected a specific host to keep things consistent. I'm aware using closer hosts would give better speeds, but it can also be used as an argument that a host might just be giving poor speed reviews. Anyway, speed without VPN with VM:

Speed with a VPN on PIA's London option, UDP AES-CBC:

Quite a drop but whatever, guess it's a what you get for selecting a server and not letting it pick the best... plus general VPN drops as expected. Still very usable. Great, okay, so let's confirm that speed actually works over VPN. Did some casual browsing for a few minutes. Setup a FTP transfer:

Looks about right, nice. Okay, now let's stop that and give try a torrent out. I've gone with a linux distro again as I know they're very well seeded and give crazy speeds that often max me out. Wait what:

Now, keep in mind I've not touched VPN settings, have nothing else running that might be using my connection. This can't be right? Let's close the client and do another speedtest:

What the hell happened? I'm not saying it's VM but right now I can't see any other possibility. If you leave it for a further few minutes with the torrent client closed, the speed returns to normal. It's something about torrent traffic over VPN, at least for me. I have all default settings on the client, have used multiple clients to test (see previous posts) and all have the same result. Maybe there is something wrong with the torrent, or maybe VM just don't want you torrenting at all? Here you'll see the same torrent a few minutes later with the VPN off:

I had zero issues until a week ago and then bam, some weird cap only affecting torrent traffic which at times I heavily rely on professionally. If this isn't VM, what else could it be?

deviousiphone
Rising star
1,055 Views
Message 25 of 36
Flag for a moderator

Select a none standard port for vpn connection, in torrent client BitTorrent settings disable uTP and chose TCP instead.

Hi thanks for the suggestion,but I have already tried UDP and tcp on various ports, I think maybe enabling SSL for UDP or TCP is required.

Unfortunately for me Cyberghost is not capable of doing that yet (or indeed many  other vpns). I recently signed up for 3 years (as was working absolutely fine for just over a year until approx 1-2 weeks ago), they seem to think it's my isp doing the blocking. To be fair they were very helpful in getting me to perform various checks, but the results were still the same.

DreamOfCheese
Rising star
1,017 Views
Message 27 of 36
Flag for a moderator

You don't enable SSL for UDP or TCP at a protocol level, encryption is an application level thing. You just tick "require encryption" in the torrent client options for connections to seeders/peers.

Not that it'll make any difference to the alleged traffic management as the torrent traffic is already encrypted by the VPN, which is exactly why I've said it's impossible for VM to be traffic managing you when you torrent, they cannot tell the difference between torrent traffic in the encrypted VPN and any other type of traffic, it's all just garbled to them.
0 Kudos
Reply

deviousiphone
Rising star
1,014 Views
Message 28 of 36
Flag for a moderator

I don't use torrents anyway. I am just using a simple speed test using speed test Ookla, receiving about 30 meg.

On the occasions I have used a newsgroup, I always check SSL and use port 443 or 563. Still the same speeds for me when using a vpn using either express VPN or Cyberghost. Speeds are ok without VPN on, but like I said before I wish to use my VPN.

Then while VM aren't throttling it you're at the mercy of various other factors, and the VPN provider if so inclined thank you for giving them traffic data to sell.