Upgraded from M350 to 1GB, Constant issues with speed drops

Made the upgrade to 1GB from M350 17/18th August and had it installed on Sat 20th. The first couple days was absolutely brilliant. I was getting the speeds advertised and i'm still getting them. The problem i'm having is that it keeps dropping all day every day for the last 2 week on a wired ethernet connection. I'd use speedtest, samknows (sometimes the test fails when it's dropping connection) and all those websites/applications and i'll see drops of 0.15mpbs, then shooting back to around 200mbps to the advertise speeds of 900 to 945.54 as i know it won't go over 950 due to hub limitations. I noticed packet loss/huge latency spikes and it was getting worse so i checked speedtest to notice it dropping to around 0.57. Image below  was my speed 2 days after installation after noticing latency online. It's still dropping between 0.15-0.50 this morning.

I thought it would be due to a new install/upgrade so i let it settle for 7 days and the issue seemed to go away, i checked the "Fix Broadband" option on the VM website and they say i still have issues so i've booked an engineer visit. Just wanted to know if there are any solutions on VM's side, checking to see why i'm getting my speeds but it's spiking crazily all day. I can web browse but can't play games any more due to it getting so bad. Can't watch videos on youtube on the tv either.

Been hitting these lows all morning out of nowhere. 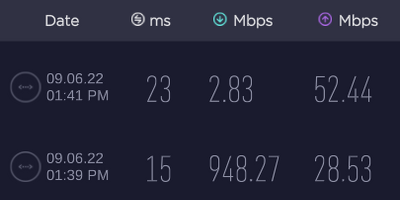 Thanks for your post, and a warm welcome back to our Community Forums!

I'm sorry to hear you're facing problems with your Broadband service. I've taken a look at things on our end and can see some packet loss, and disconnections on your service.

I'm going to drop you a private message to look into this further. Please look out for it in the top-right of the Forums, in the purple envelope.

Thanks Reece for the messages but i'm pretty fed up/had enough.

Having upgraded on August 20th, to an engineer that failed to send off my request for cabling repull outside my property and contecting VM Community here around the 13th September, to booking me in 3 weeks later on October 8th, to receiving a text message just now telling me that they've rebooked me in, for 2 weeks time on the 22nd. I've put a complaint in and i'll be looking to leave VM after years with you through family and then me. Nothing but problems from installation after moving a few years ago and waiting a couple months to get connected, to waiting what would be 2 months to enjoy waiting 2-3 minutes to load an image and 5 minutes to buffer a video to having to buffer again a few minutes later. Won't even think of playing an online game right now.

Wish things were so much simpler to get online, i'm in the city and shouldn't have been an issue, it's a highly populated VM area and i feel a bit entitled to be reacting in this way but it's just one problem after another, it's affected being able to work, gfs side business etc. Sending me barmy.

I am sorry for that, as my colleague has explained, we would have booked in the first available slot. Though I do appreciate the frustration. Please do let us know how the tech visit goes and if you need further assistance.

It was rebooked twice to October then 28 November. No one from, i'm assuming Comex2000 since they're partnered with VM bothered to turn up to the property yesterday, was supposed to have been escalated since it's the construction team for the pre pull and have a text message or email by 5 today and got nothing. I have a VM Assistant on Whatsapp asking me if i'm ok to rebook it to the 14th December. I'm refusing and fighting to get my contract canceled. I can't stream anything, play any videos or play a simple online game.

It will have been 4 months and counting to get this sorted, i'm done.