Just reposting this for the VM forum team because it was getting lost in the chat:

There's got to be some give and take on both sides. Right now, I'm giving and VM are taking. It seems to me that I'm making all the effort. I'm jumping through the hoops and doing everything I've been asked, but I'm getting nothing in return.

I've ordered and collected a brand new 5m ethernet cable from PC World and run a wired speed test. Predictably the results are the same as the wifi test (see below).

Where do we go from here? I'm out of contract and can leave at any time. So what is VM going to do to persuade me to stay? 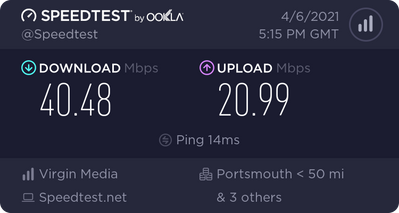 Mate I couldn't help but notice you BQM for yesterday around 8:00pm.

What the hell happened?

Forgive me for being nosy.

Mate I couldn't help but notice you BQM for yesterday around 8:00pm.

What the hell happened?

Forgive me for being nosy.

Not at all mate 🙂 Your guess is as good as mine, I put up a post here for Virgin Staff to look into it. Was online at the time and noticed pages weren't loading properly and then done a few speed tests and coming back between 90mb-200mb which was dismal as I usually get around 800mb-900mb. So went and took a look at the router stats and everything was fine apart from Post RS Errors had started to rise and finally checked my BQM and had a WTH moment....lol. Its returned to normal now but will keep an eye on it tonight, if it happens again then I might be looking at over utilisation but I'm thinking more along the lines of a fault as this was not a gradual thing, just out of the blue for a few hours and then gone. Has me baffled mate 🙂

Thanks for your response @JPL8.

I'm sorry to see the speed issue is also affecting wired connections, I can appreciate how frustrating this must be and we apologise for any inconvenience caused.

I can't see any issues on your account at present that could explain this, but as the Hub hasn't been rebooted in 5 days I'd advise you doing so. This will help refresh diagnostics on our end to help us see anything we might be missing currently.

How have the speeds been since posting?

Thanks for your message.

As I've said all along, this isn't an issue with wifi vs ethernet. There's a fault which hasn't been raised, but has been acknowledged by Customer Services (by phone) and by an engineer (in person).

This was confirmed yesterday by email from VM regarding my broadband speed assessment:

"As you know, we’ve been running a series of speed tests on your Virgin Media Hub. We're sorry to report that the speeds to your Hub have dropped below your Minimum Guaranteed Download Speed for 3 days in a row."

The VM engineer advised me not to reset my hub before the fault is fixed because I could lose my downstream and upstream channels again. So I can't reboot my hub unless you can confirm the fault has been fixed.

However, the Hub rebooted itself yesterday whilst I was working online and my speed tests seem to have returned to normal … for now. I'm not sure why that hasn't been picked up at your end. It completely reset my wifi settings, for example.

However, since this has never been confirmed as a fault, I don't believe I'm in a position to say that it's been fixed. Only VM can do that, but you'll have to admit that there actually was a fault all along.

Finally, where do I stand regarding financial compensation for the diminished service for a week, the time wasted here on pointless back and forth about fault/no fault and wireless/ethernet connections? I had to go out during the lockdown and buy a cable (that I don't need) just to demonstrate to VM that the fault I had been told was at their end, really was at their end. It's ridiculous. 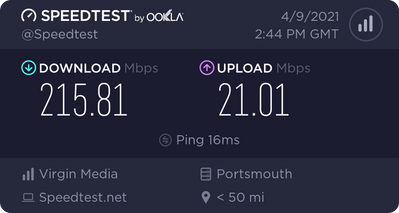 I've been getting terrible speed problems all week in Waterlooville, my wife's been having problems connecting to work and has had to tether her mobile to the laptop on several occasions. Are you in the Waterlooville area of Portsmouth by any chance?

No, I’m in Southsea. There is/was a fault in the data centre at Cosham affecting the street I live in and the area around Fratton Park.

An engineer explained the problem to me earlier this week.

Thanks for getting back to me @JPL8 and further expanding on the situation, much appreciated. I've taken another look at your account and there are currently no issues showing. How have things been working for you since the Hub rebooted itself last week?

In regard to compensation, please take a look at our Automatic Compensation Policy here. Apologies again for the slow speeds you experienced.

Thanks for your message.

Everything seems to be running fine at the moment. Has the fault been fixed?

VM used to compensate its customers for diminished service. Is this no longer the case?

Thanks for coming back to us  @JPL8.

I have looked into your account and can see that there are no longer any faults in your area.

I have added a credit onto your account for the speed issues and this will be taken off your next bill.