What is a QAM? Any online resources where I can read more about them?

Quadrature Amplitude Modulation.  It's a clever mathematical way of transferring data by differentially changing the amplitude (volume, if you like) of two out of phase carrier signals on the same frequency, and it's needed to increase the bandwidth because the coax to your house is absolutely crammed with 350 TV channels, yours and all your neighbour's concurrent internet activity (browsing, streaming, gaming, mail, social media).  There's a complicated explanation of it on Wikipedia, but pull out if you feel you head is about to explode, there's shorter more readily understood summaries elsewhere.

For practical purposes all we need to know is that higher QAM enables faster data transfer, and the upstream (normally) runs at 4 channels of 64 QAM (noting Adduxi's insight above).  The higher the QAM the more susceptible to interference, which is not always good news for Gig1 customers because that relies on 4096 QAM downstream, whereas DOCSIS 3.0 channels used by the Hub 2 and 3 run at 256 QAM (and probably why your speeds actually dropped).

Going back to your BQM, that's looking like a classic over-utilisation picture.  Let's see what happens this afternoon at least you've now got the tool to establish whether it gets fixed and whether the fix delivers a decent service.  What you should see is a BQM something like mine at the bottom of this post (red is simply where it goes off on a timer overnight).

Incidentally, why did you upgrade to Gig1?  If that was recommended by a VM agent as a solution when you reported connection problems, then you've been mis-sold and should consider a complaint, as any underlying problem was either your cable connection or more likely the over-utilisation, and selling you a pricier package was never going to fix that.  If on the other hand you upgraded purely of your own accord in the hope of improving something, then VM can rightly say "not our fault, we didn't advise or mislead the customer", although if they don't fix the over-utilisation then there's a clear argument that they knowingly sold a service they couldn't deliver, which would be a separate breach of trading laws.

Upgrade was because I was seeing routine hangs of the 2C Superhub I had, particularly triggered by Zoom calls (weirdly). Bizarre behaviour, only fixed by power cycling it. Rather than trying to get VirginMedia to do anything useful on that front (I think we both know how that would go), and seeing that Gig1 was available in my area, I opted to go for that. Sales agent at no point said there was over-utilisation in the area, and 1st line support already said on a call (which I'm sure won't be recoverable, because: VirginMedia) that I'd automatically get refunded pro rata from date of Gig1 install until fix. So yeah, let's see what happens today...

Curious what others' experience of the Hub4 is, mine is poor. It's evidently functioning, but the web interface has been timing out for a few days now, and I'm guessing the only way to fix that is to power cycle, which of course will drop the connection again, right?
0 Kudos
Reply
Highlighted

It isn't always feasible (eg due to the dumb "smart home" devices that can't cope when the wifi drops), but if you can, you might want to consider putting the Hub 4 on a timer and having it go off overnight.  That way it gets power cycled daily, which I've found improves reliability of my Hub 3, and you're avoiding wasting about 35 kWh a year.  Buying a cheap Masterplug digital timer for about £7 that'll pay for itself in about a year, after that you're saving money and avoiding wasting energy.

The cable industry uses analogue QAM to carry broadband, linear TV and VOD signals over coax. In the home the virtual smart card of the STB (such as the V6) unpacks the QAM signals. On the return path you'd usually expect to see 64QAM but a noisy line might cause this to drop to 32QAM, sometimes to 16QAM and infrequently to 8QAM.

How do you think?

(I misread Jodi_S's post above, should have been fixed by 17th of June at 13.15pm, so yesterday. Guess I call the fault line again tomorrow, eh?)

Also, cross linking here's my post about the dead web interface on the Hub 4 if anyone has any thoughts.

I notice you've used ookla for your speedtest. Have you not tried SamKnows? The hub 4 is SamKnows enabled. This tests the speed from your router direct to the internet. It doesn't matter about your ethernet or wifi connections, it tests directly from the router. Go to https://samknows.com/realspeed  and it will give you a speed in which your router is connected to the internet. Ookla and other speed test apps test from your device, and speeds will vary. Also speeds will max out at about 942 over ethernet as well, hence having a test from the router itself.  This is a test I just ran to illustrate. I hope you get it sorted soon! 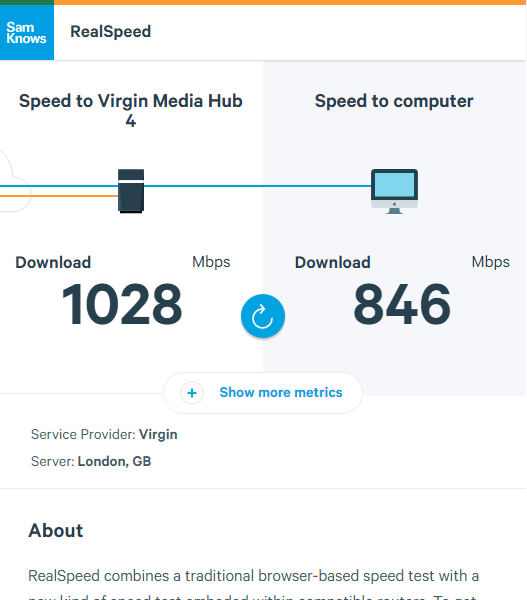 How do you think?

If your BQM still looks like that - a sea of blue and yellow but OK through the small hours - then it suggests very strongly to me that VM have done nothing about over-utilisation, and this was a "review date" not a "fix date".  Unless the forum staff can be more forthcoming and offer some more compelling evidence for a genuine investment-based capacity upgrade (and I doubt they can), then what is going on here will be a revised fault "fix" date a month or two down the road.  Nothing will actually be done, they'll just hope sufficient customers leave to bring the local network traffic back within the capacity of the equipment.  I could be wrong, but I'm calling out the company: Prove me wrong.

In your circumstances, what appears to have happened is that:

1) You already had a shonky connection because of the over-utilisation.

2) VM (knowing there was no spare capacity) sold you a higher speed contract that they would have known could not be delivered.

3) Because the Hub 4 is more demanding of connection quality your speed has got slower than before - again they should know that was a probable outcome on a congested segment.

4) VM are claiming to fix the over-utilisation, but looks to me that in fact they're doing nothing of the sort.  It could be just that engineering works are running late, but as a general rule increasing local capacity is uneconomic and VM mostly won't do that.

In your shoes, I'd be raising a formal postal complaint either demanding reversion to your old (one month notice) contract and a Hub 3 (so you're back where you were financially and technically, although you've still got the over-utilisation that could take many months before that resolves). Or you could demand immediate release from contract without penalty, because VM have knowingly sold you a pup.

If you do complain, be clear about the issues above, and state that you request VM immediately accede to your request or issue a deadlock letter because you intend to escalate this to the industry arbitration scheme CISAS at the earliest opportunity (and to complain to Ofcom that VM are knowingly selling capacity that they don't have in clear breach of the company's regulatory commitment to treat customers fairly).

Let's see what the forum staff can say.

Welllll, this is embarrassing...

So, I had the Hub 4 in modem mode, because, well, everyone knows everything Virgin do is terrible, right?

But, I also wanted to prove how terrible they were with the samknows stuff, which only works in router mode so flipped it across and ran the sam knows stuff: 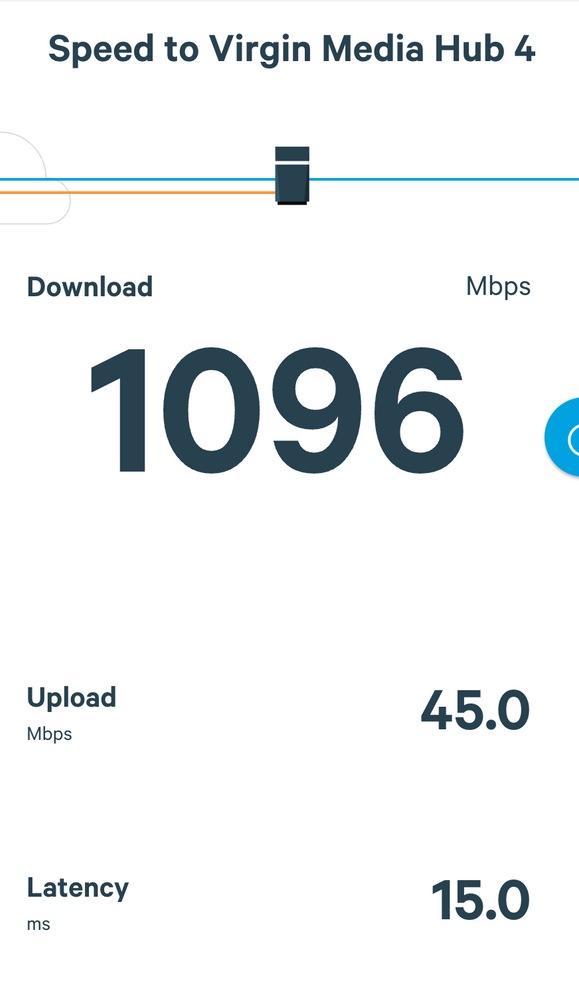 Wuh? I was not expecting that. Okay, so I basically unplugged things until I could go directly from 1 gig ethernet socket on this machine, into a wall socket, out of the patch panel at the other end and into the back of the superhub:

Looks rough now, but I've mainly been doing speed tests and power cycling things, so perhaps not so surprising.

*completely* unrelated question 😉 : Can anyone recommend a good firewall/router that supports a plugin USB 4G dongle? I'm currently using a Draytek Vigor 2860, but, well, read above...