Anyone spot the issue?

so I was at the property as I’m mid renovation. And noticed there were contractors digging up some of the pavement. Pretty certain it was Virgin Media, or the connectors doing the first part. Hmmm,

Yup - Looks like VM need to get their finger out and invent time-travel...

Thanks for posting. Apologies for this. I can see that from checking the system, you've spoke to the team and been explained about the construction.

It was all explained, and all fine until I logged in this morning to track my oder and got this: apparently I have no active orders, and my account is being cancelled. I am so fed up of this. Someone playing silly buggers for sure. Super strange. And honestly quite frustrating. These games. Does anyone at Virgin actually care about customers?

Thani you for coming back to us, we are sorry to hear your accounts has been cancelled, have you been able to speak to our pre-install team on 0800 052 1734, what have you been advised in regards to why the order was cancelled?

nope, cost had all been approved, all permissions granted. Two days later that was all cancelled and my account closed. No call to offer me any other product or solutions. No call AT ALL. Quite frankly it's been shocking the service. Speaking to a human with any common sense has been impossible, Assured twice and email would be sent challenging why it had been cancelled. Assured I would have a call back within 24 hours, it's now Wednesday. That assurance came on Monday. I am disgusted at the service to be brutally honest.

The salt in the wound, neighbours in the building below and beside me have VM, there is a VM box on the wall on the ground floor. I'm not asking for a lot - just broadband. I understand if the 500mb package requires more lines, a new line fibre to the door etc it's a lot of work. But what can I get, 300, 150. To just cancel my order after the whole credit check process I am really disappointed.

No one at VM gives a crap. No one has called me. You guys simply do not want my custom. That much is clear. Baring in mind this is an order I placed mid July too - so I've been waiting a fair chunk of time. It's just not good enough.

Just to add to this. There is virgin in my building. Neighbours have the service. Not sure which but they do. VM preinstall who cancelled are telling me it's not unserviceable. Yet when I put in their flat number (below me) VM exists. Further to that I can order the package I wanted myself. SO many games. I am over it. Trying to give VM money.

Being told that other customers are in my building but I cannot get any service. It's laughable. No one is accountable. And no one gives a poop about me as a potential customer. 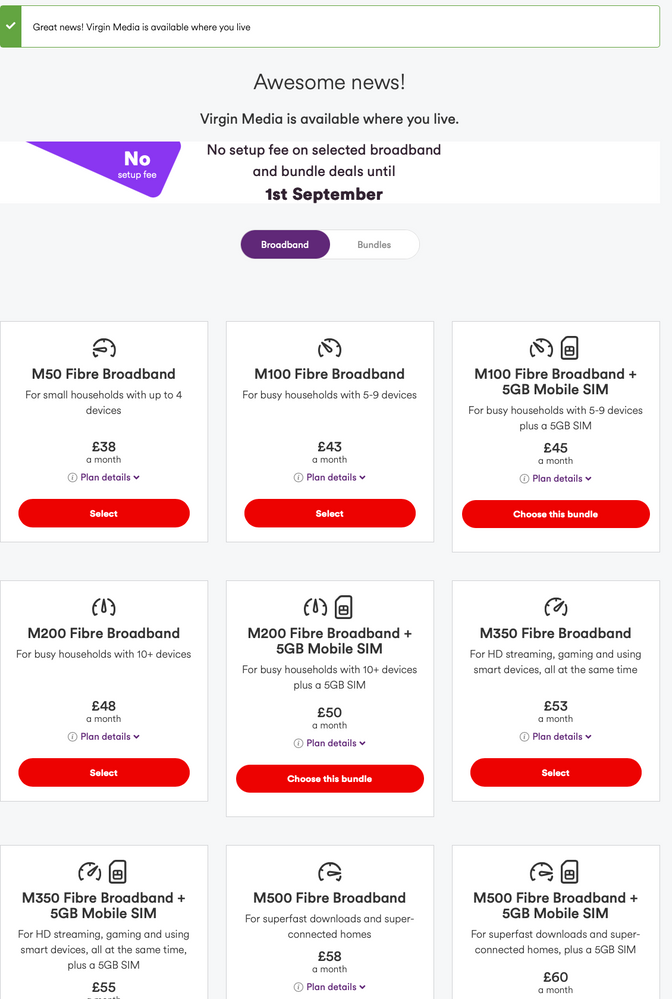 How high up are you?  Due to H&S rules, Virgin won't install above the first floor unless there is already an internal cable installed to that flat.

And it seems that at some blocks they won't install at all, for reasons that aren't entirely clear.

nothing to do with that. My neighbour across the way has services after a quick check on their number it's the second floor.

So basically they don't give a crap about one customer in the building, even though several others have their services. So it's tough poop for me wanting to join.

VM preinstall admit it's an issue and mistake the entire area is serviceable, but because some idiot has declared in unserviceable apparently there is no way to flag it as an error and rectify.

Not sure how high, I've want to complain and don't seem to be able to do that. It's not good enough. The person who had deemed it that, clearly hasn't looked at the rest of the customers in the building, and had deemed it so because it needs cable replacing. But that doesn't impact me, I can get services as they have all agreed, but apparently no one has authority to flag it as an error, or amend it. It's bonkers.

It appears that VM's rules about flats have changed recently, and due to their appalling lack of communication - not just with customers but within the company itself - it's entirely possible that different departments are working to different rules.  I hope you can get this sorted!