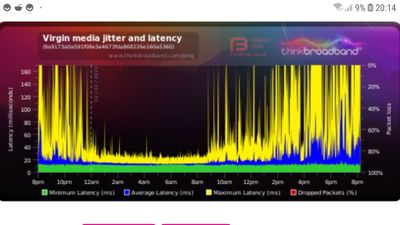 All day, Everyday. For over a year. High utilisation problems that were never fixed. My right to cancel lasts until 22/2/2021. Been paying £50 a month for about 4 years. I was told that the problem would be fixed on 10/2/2021 now being told 24/2/2021. Asked if i could have my right to cancel extended until the fix on 24/2/2021 and was told that it was impossible. Nobody seems to mind if i leave and i've been nothing but nice and understanding. I can only assume that you want people to leave due to high utilisation.

Overutilisation issues are infamous on these fora. True fixes can take anywhere from a few weeks to years. All VM ever give is "estimated" fix dates - which as you have observed do have a tendency to not be actual fix dates. The 24/02/21 is just a finger in the air. I would say that this is a thinly disguised effort from the CS agent to get you not to cancel.

However to be fair to VM the same BQM profiles can be generated due to other faults. So I will ask VM to take a look and come back to you on here with a comment.

Thanks, i hope they do.

Hi @Insidetheeye , just to be clear I am not VM staff, just an "insightful user" like jbrennand.  Looking at the BQM I'm seeing a typical over-utilisation pattern - you see how it's very poor during normal waking hours, and then great from about half past midnight to 9 am? Shows that the network and your hub are working perfectly when there isn't too much traffic. The most probable cause at this point in time is upstream over-utilisation, due to home working, home learning, video calls, gaming and live streaming uses.  This affects the upstream because on a cable network, the upstream capacity is "hard coded" at a 1:10 ratio vs downstream in the current generation of technology that VM use, and that can't be changed in a timescale short of years.  Which means that there's a very good chance that this will resolve when lockdown ends, assuming normal schooling, working and leisure behaviours return.  Obviously your guess is as good as anyone else, but I'm thinking several months yet.  In a small minority of "unlucky" areas, the problem won't go away in notably congested areas until VM carry out the slow, expensive and complex work to increase network capacity, and for those poor souls, it can be many months, even years without a fix, despite regular assurances of a resolution, on dates that come and go without improvement.

I'd start off by saying that Covid wasn't VM's fault or anything they planned for, it's just unfortunate that lockdown affects DOCSIS cable networks far worse than most of Openreach or alternative FTTP technologies (they may have problems of their own, but not these particular problems).  But I do believe VM have responded appallingly to both the consequent utilisation problems, mainly through silence or obfuscation, and their customer service provision has been wilfully inadequate for the past nine months (and was pretty poor beforehand).  I don't believe VM will be working to fix this or most of the current crop of upstream over-utilisation problems.  If it were quick, easy and cheap they'd do it, in fact they would have already done it.  Whereas they clearly haven't, and they're still happily selling new contracts (like yours) for areas with very poor service.  So that says they can't/won't fix the problem, and they aren't too worried about signing up new customers and taking their money, which is very disappointing.  In your shoes, but with the benefit of what I've seen round here, you've got two options:

1) Hope that lockdown ends soon, that all the Covid-related behaviours revert to how there were before, and hope that this does release pressure on the upstream, restoring a decent service.  There's a very good chance this will be the case, but as I say, who knows how quickly.

2) Use your cooling off period to cancel without penalty (and don't be persuaded by promises of imminent fix dates).

I already have bt being set up on 18/2/2021 so i will just go with them. Failing that i'll try sky as aparently they had one of their best years according to ofcom. The only problem being i can only get the package up from the basic in my area, which is funny as i live next to the University.

I am not the best person to read BQM graphs..I understand red is bad.

The recent VM engineer visit mentioned my area is over utilised. My graph has more yellow compared to others but OP graph is on another level 😞

Thanks for your post on our Community Forums and a very warm welcome to you!

Sorry to see that you're currently struggling with the congestion on the network we're currently experiencing and a huge thank you to @Andruser for a very well detailed response for you.

I'm sorry to hear that you're seeking to cancel with Virgin Media and have signed up for BT. We don't perform disconnections over our Community Forums, however I can see if a colleague is willing to assist me with this process, if you are happy for me to do this.

Check out the purple envelope in the top right hand corner for my PM and drop me a response. If you prefer to call, no problem. Feel free to discard my message

just an update. It's always this bad.

I can see Dave, has messaged you if you wish to continue chatting in relation to your account please reply 🙂