Connected to wifi with no Internet

We are a family of 3 that rely on the Internet quite a lot. We constantly have issues though, with it dropping out, saying we are connected to wifi but with no Internet. We have an Oculus VR, 2x Xbox ones, 2x tablets, 3x phones, 3x alexas, 2x Google homes and 3x Now TV dongles!

Does anyone have a similar set up and what speeds are you guys on. Virgin just keep making me upgrade to no avail but then tell me I need to upgrade again.

Thanks for any help 😊

I’m not sure what the issue is off hand but upgrading to a higher speed is unlikely to fix it - sounds like you’ve been mis-sold those upgrades.

Some VM ‘helpline’ people apparently have a habit of trying to upsell, often due to the number of devices, even though they don’t use much bandwidth.

Thanks for the reply.

That is my understanding now too. Earlier today they tried selling me another upgrade "as this would resolve the issue".

I know that I can't be that much of a heavy user compared to some and that my "speed" couldn't be the real issue?

Anyway, I am just looking online to find a cheapish, decent mesh wifi system and hope that helps??

Otherwise, I don't know what else to do.

Before you spend any money on your own networking equipment it’s best to check out your circuit, so please supply some stats. 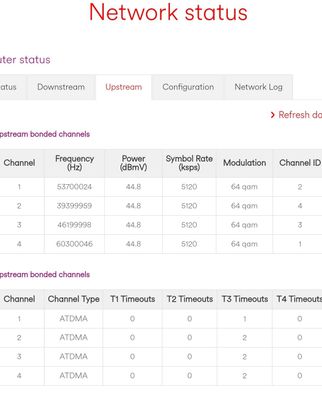 Hope this makes sense as none of it does to me 🤣

It's a lot easier if you copy and paste using a computer with a keyboard, because screenshots aren't ideal.  In particular, the network log has far more entries than the couple showing on your screenshot, and because the screenshot contains personal device identifiers it can't be approved.  If posted as text the forum software automatically obscure that.  Having said that, from the data that is visible, there's nothing obviously wrong (which doesn't mean there isn't anything wrong).

Can I ask another check, which will seem more complicated, but isn't any more difficult than paying for car parking online (!)  Setup a Broadband Quality Monitor to show if anything odd is going on with your VM connection.  Ideally, I'd like you to post a LINK to a LIVE, SHARED graph here and we'll see what's happening.  Usually needs to run for 24 hours before we can draw reasonable conclusions, but the live graph will continuously update so you can post the link immediately.  Obviously, if VM customer service weren't so incompetent you wouldn't have to do any of this, but there's not much we can do about that.

If you have to use screenshots, you need to let the BQM run for 24 hours before taking the screenshot, and you then need to edit the screenshot to remove or obscure the IP address visible at the top left.

Thank you for that.

I believe I have done what you have suggested and this is a link to a live graph, maybe? 🤣

Thank you for being patient with me 😊

This day was quite bad. From 9pm no one the children aren't using the Internet so it is just back ground data being used.

Well done!  The BQM links both worked, and were what I was after.

There is a modest problem apparent, that the yellow spikes show some peak time congestion on VM's network, but that wouldn't normally cause the problem you describe.  The impact of data congestion at the levels indicated would be a bit of choppiness in video calls, a moderate amount of griping by gamers about "ping", but Virgin Media would be unlikely to admit to any problem at the levels implied by the BQM, so I'll leave that topic alone.

There is a complete loss of connection for about five minutes or so obvious around 5pm on 11 March.  That would potentially show up as "wifi connected no internet", but from your comments the problem is more sustained than that?  Is the no internet problem reported by all devices, games or apps, or only by some of them?

Separate to the problem itself, do you want to make an issue of the fact that you were persuaded to upgrade on false pretences?  That's unacceptable, and there are effective means of getting that side of things fixed.