I can’t believe the service I’ve had off Virgin Media.

I had sent a message on the online form last night as in Sunday and told I would hear back within 28 days!

I couldn’t wait that long to resolve my issue about my bill as back in January I was paying £15 a month then in February it went up to £18.25 without any sort of notice and now we’re in July it’s just jumped up again to £29.85 so I phoned Virgin on Monday morning and tried to ask them about it and got passed from the retentions team to the sales team and instead of trying to help me the person I spoke to just kept trying to build up my package and raise my cost which I had said I don’t want to go higher, all I’ve got and all I want is broadband but no all I was getting was pressure to get extra stuff in the end I gave up and said enough is enough and I hung up.

Come the August bill Virgin are expecting to take my bill to over £47 a month and like I said I’ve not had any sort of notification that my bill was going up at any time I’ve found this out myself by looking at my bank statements and my bills.

I’ve also sent another message in on the online form which had said it had been accepted but when I look in my track complaints folder there’s nothing in there at all.

I’ve also spoken to other people they’ve said exactly the same thing that they’ve not been notified of change in price of there contract which is a breach of contract!!!
Thanks to CityFibre there’s now a lot more companies coming to my area and I’ve already been in contact with 2 of them which are both cheaper than yourselves so Virgin if you want to lose a loyal customer and many more please carry on with the way your going.  As I said to your rep on the phone and in the online form I’ve already cancelled my direct debt as I’m not paying you those prices as I said I wasn’t notified.

The annual VM bill increase was from 1st March. Customers were informed of this by either letter or email.

VM bill a month in advance to it's likely your £3.25  increase showed on the February bill. (picture below)

Each and every bill shows when any existing discounts end, as does your contract. Both are viewable via My Virgin Media. (bill picture below)

If you have online billing you will also receive an email advising when your bill has been produced, and the email advises of the amount and also the end dates of any discounts. (picture below)

Check your bills as  you may have different rated discounts ending on different days.  The bills will also show of any extra charges incurred such as telephony charges, adult content viewed, PPV's you've booked etc. 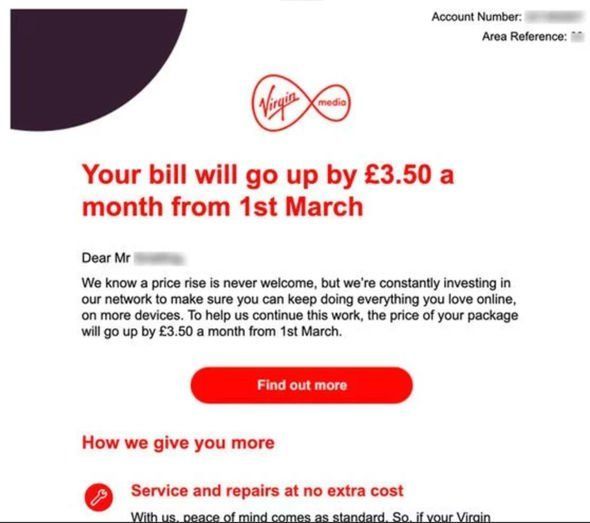 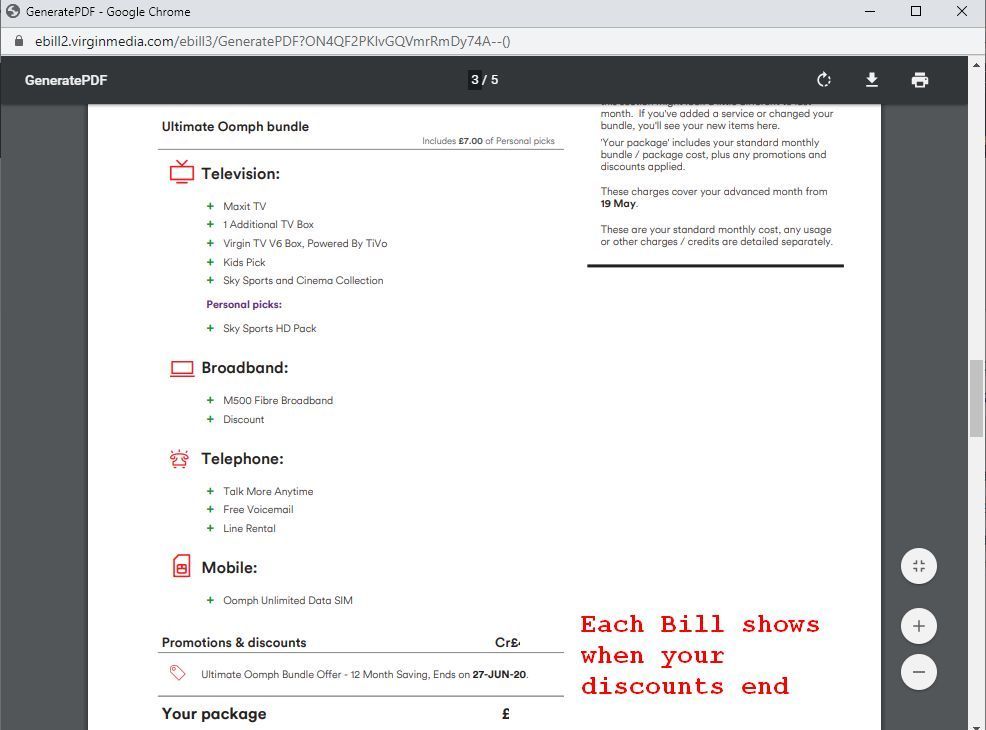 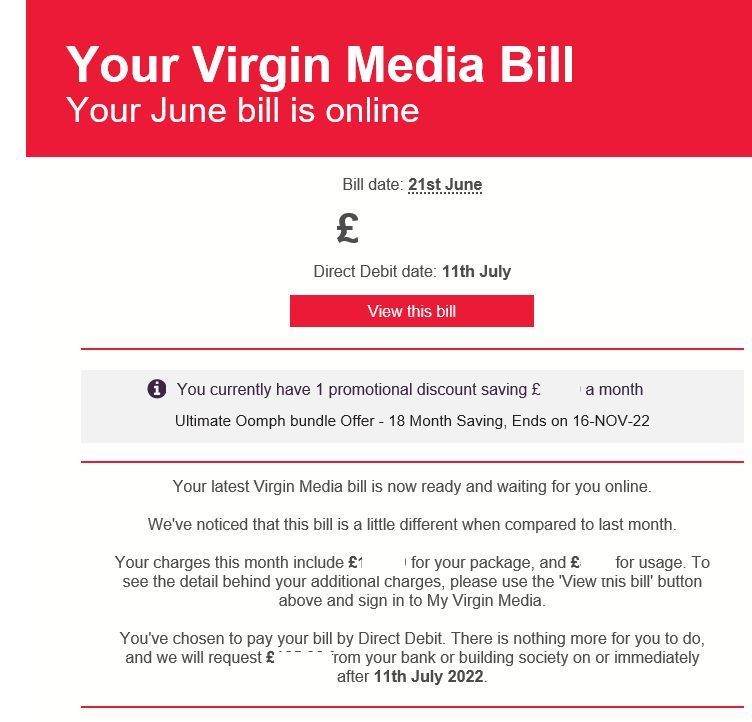 Welcome to our community forums and thank you got your first posts.

Sorry to hear you have been having billing issues. We can understand the concern caused and we want to best help. Was the explanation given by @newapollo useful? Do you need any further help?

<snip>  As I said to your rep on the phone and in the online form I’ve already cancelled my direct debt as I’m not paying you those prices as I said I wasn’t notified.

Cancelling your direct debit might result in VM automatically logging a bad debt against you for missed payments. They are very efficient at doing this, despite often being very inefficient at many other things.

Thank you to you all for your reply’s,

But that letter or email that had been put up about the £3.25 increase I had never received and that one about all of the discounts they don’t finish for at least another month and again I’ve only found this out by checking my bills and this is why I’ve got in touch with Virgin and now put up this post.

like I also said I no of other people that have had exactly the same thing with there bills no email or letter about a price increase and also haven’t lost any sort of discounts and they still had all of there original discounts for months to go.

Now after yet another phone call to Virgin things have been sorted out but still be extremely careful as I said about about keeping a close eye on your account.

thank you for the update @Casper2017.

We further apologise on behalf of the team for the experience you had. We are however glad to hear the issue was resolved with our team. Please do not hesitate to contact us if you need any further help.

Thank you for your message it is now sorted out!

My problem was I had been with Virgin for years I had never had my price increased till that annual thing that you mentioned which I had spoken to them about that.

When I had got round to talking to the lady that could understand what I was saying she was in complete shock and nearly had a heart attack about my broadband package that I’ve had for years!

When I first signed up I was paying £15 then this year it went to £18.25 then jumped to just under £30 and was about to jump to nearly £50 and that is just broadband I don’t have the tv box or a phone line and never have done

I’ve been dropped back down to the very basic broadband that I first signed up for I’ve lost all of my loyalty discounts so it’s as if I’m now another brand new customer despite I’ve been with them for years.

Let’s see what happens when this contract comes to a end in just under 12 months.

Thank you for your update and glad @newapollo was able to help.

I hope all goes well for you 🙂

Thanks for updating the thread.

Pleased to see you were able to receive an understanding response from one of the agents on the phone.

Just remember to  make a note in your diary (or check your discount end dates on your bills) to contact VM again in 11 months times to renegotiate a new price.