I signed up for an online upgrade offer on Thursday and received confirmation of the order being received. Yesterday, I received an email saying: "We'd like to talk to you to as it appears that some information that we need to process your order was missing."

Called the number on the e-mail - first lady had no idea what was going on - kept saying she will see if she can match the offer, to which I reiterated I don't need a new offer, I am happy with the offer, but that you contacted me for some information. No idea what information was needed, no evidence she even knew what the new order was, let alone what information they may need. She then said she would pass me on to someone else.

After waiting 45 minutes, I got through to retentions - weird as I was already being retained as I had signed up to a new order, but okay. The guy was very nice, and helpful, but again had no access to the online order and tried to re-build it but couldn't. Can't I just have the order I made? He then said he would transfer me to sales (as far as I am concerned a sale has already been made, but okay). Was transferred then went back to the options - as I had been on the call for over an hour by now I decided to hang up.

What is evident is that Virgin Media's systems are not up to scratch - which is a shame as just a little bit of synergy could have resolved whatever problem they are having with my offer. Now, I am annoyed, having wasted my time with no resolution and it wasn't even me that has an issue, but virgin, yet no-one knows what is going on. Poor show.

The one shining light is that I have seen the forums team seem to be very good and have solved similar issues (even though it is not fully in their job influence). Here's hoping they can help here too and solve whatever issue Virgin have so I can get my order processed successfully ASAP.

Virgin definitely need to get their systems in order to provide customers with a much better service; that much is evident.

You've asked for us to deliver on the following date:
Mon Feb 8 between 8am - 6pm

As you can see above, today was the day we were supposed to receive our quick start pack (£35 to do it myself, but that is a different story), but - lo and behold - nothing has arrived. Still unable to get hold of anyone who knows what this so called problem is with my online order.

I'll try one more time, but then I feel I might have to complain officially. Hope I don't have to take it to the Communication and Internet Adjudication Scheme or OFCOM. All I want is for someone to know why Virgin contacted me and have held up my order - you wouldn't think it would be that difficult - surely there is some record on someone's system as to why they needed me to contact them, so we can finally get moving on the service I have signed up to in good faith.

Cross fingers for me!

Thanks for the reply, Spidey.

I'm pretty peeved at Virgin right now having spent hours on the phone and chat, the only thing they seem interested in it upselling to a more expensive deal,

Having been with them for 20 years, I think it pretty bad form for them to advertise an upgrade on my account and then for the price to go up when trying to obtain that advertised offer. I'm starting to believe that this is deliberate and that a lot of people may be purchasing an advertised deal that turns out to be a hell of a lot more than they thought.

I have spoken to retentions now and despite the offer still being on account as an upgrade, the call handler said she is only able to offer me deals that she could see on her system.

Hi Spidey1978, thanks for the message and sorry to hear that you have issues with the package, can you confirm what package you agreed to and the package which you were given? - Chris

Hi markal1, what is the deal showing on the online account, sometimes it is an online only offer, What deal are you currently on? Chris

The deal showing online is £34 per month for M200 Broadband, Mix it TV and Landline. (Including a £22 per month Loyalty Discount)

I can't put it through online as the system gets rid of my loyalty discount and trys to charge me £53 per month,

HI markal1, can you send us a screenshot of the page you are getting and also the next page where the price increases? Chris 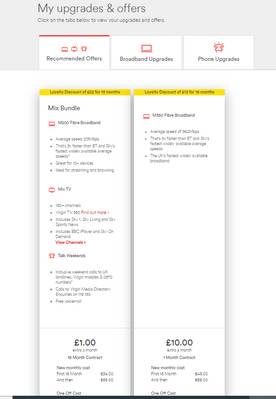 And here is the final page when trying to purchase