badrobot91
On our wavelength
1,100 Views
Message 1 of 38
Flag for a moderator

So i been having internet issues for about a year now and i had a number of engineers come out and tell me different things e.g. a faulty wire, the box outside flooded, my device not being compatible which has to lead me to purchase things like ethernet cards etc..

my router is in the next room but i was advised to use a cabled connection so i purchased a cat8 cable that runs directly from my PC to the router.

i originally had around 20 devices on my router to be told this was to much even on the ASUS router which on the asus router says it can handle up to 35+ so i managed to cut the number of devices on the router by half taking my smart home offline.

regardless i have frequent connection losses that last anywhere from a few seconds to a couple of minutes, which is enough to kick me out the game. i enjoy playing overwatch which isn't a highly demanding game but it got to a point where i can't even stay in a lobby. This also affects discord i will often lose connection while in voice chat.

I been keeping a record of my internet speeds using speed tester and my internet speed (wired connection) are constantly all over the place one minute it at 60 next 500, it bounces around never having a consistent number or at least ballpark.

i tried talking to VM over text chat and every time is painfully slow, calling is much faster and easier but all i ever get is "there nothing wrong with the connection if the issue continues they will send an engineer out".

i read through the community chats and i see people with the same or similar issue but i never see a resolution. could some please advice.

badrobot91
On our wavelength
1,074 Views
Message 3 of 38
Flag for a moderator

Yes the hub 3 is in modem mode.

my wifi setting are split 2.4 and 5G before i had the wire my PC was the only device on the 5g network. 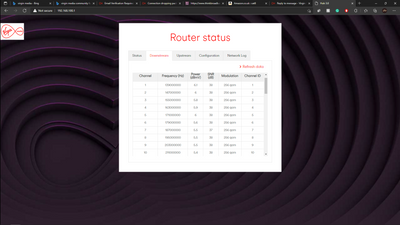 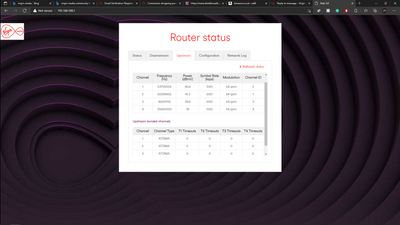 Please copy and paste all the text from all four tabs.  You will have to make several posts to get it all posted.  Ignore any warnings from the Board software and just press the Post button again.  The Board software will strip out all personal information as necessary.

Screenshots do not show the full information and are hard to read at times.

Okay thank you i try that tonight, i can leave it unplugged overnight.