Chade
On our wavelength
3,174 Views
Message 1 of 22
Flag for a moderator

Ok buckle in, sorry for the long read. So, I'll start by saying that I've been one of the lucky ones in that my Virgin media service has been pretty much rock solid in the many years I've had it, in fact from Diamond Cable to NTL and then to Virgin, it's all be pretty much OK, there's been a few bumps along the way of course, but these were generally sorted out pretty quick, which leads me to this:

This is my current result from DSLReports, at first glance it doesn't look too bad, the underload results for Down and Up have around 3-4ms of jitter, not great, but manageable. But the Idle ping, which is most similar to a gaming scenario, is 16ms with highs of 30ms, which is obviously a lot of variance, then in the next screenshot if you check the RTT/Jitter average of the download and uploads you can see that Downloads is again not too bad, but uploads have +20ms jitter, which is obviously affecting online gaming.

I'm also using an EdgerouterX with the Hub 3.0 (newest firmware) in modem mode and have QoS enabled via Smart Queue using fq_codel, I have a second router connect to the Edge for Wifi, but even with that disconnected the result is the same. I've tried limited bandwidth via the Edgerouter and that does improve the issue somewhat, but, I'm on the 350mbps service and i have to limit speed to 10mbps up and around 80-90mbps down to get these kind of results, without the Edgerouter things are ten times worse, which obviously begs the question, why should I bother paying for the 350 service? The issue only started recently, there has been some downtime in my area recently, the new firmware update and now I have this erratic ping.

Any feedback from the community would be most welcome, any tips tricks or advice would be awesome. A bit of help from a Virgin representative would be good too of course.

Andruser
Problem sorter
3,167 Views
Message 2 of 22
Flag for a moderator

At the moment I can't see your graphics (presumably waiting for mods to approve) but if the high end of your connection is 30ms, and your peak upload is a further +20ms, that really shouldn't be materially harming your gaming.  As a mediocre gamer myself, I need all the help I can get, and the dark years of VM's Pumagate fiasco were not good for me, but the downside there was 140ms pings, and I'm now down to 30-40ms peaks.

VM actively promote cable as a gaming solution, the unfortunate reality is that the DOCSIS technology used for cable is inferior to the lower bandwidth technologies used by Openreach.  So my suggestion is to accept the numbers you're seeing with VM, or to consider a "slower" connection over Openreach VDSL  Remember that what counts for gaming isn't the bandwidth (speed) of your connection, but the latency, so my 200 Mbps connection could be worse for gaming than a neighbour's 18 Mbps Openreach line.

Chade
On our wavelength
3,126 Views
Message 3 of 22
Flag for a moderator

Hey man, thanks for the reply. You're quite right, the scenario I posted above it doesn't equate to my connection being totally unplayable as a whole, but a consistent and regular 20ms+ variation in ping in fps games like Battlefield,CoD, Overwatch and so on is unplayable, and that is a best case scenario. I'm using the Hub 3 in modem mode and an EdgeRouter X with fq_codel based QoS to battle the problem, the issue with that is that I have to limit download bandwidth to around 80-100mbps, making the 350mbps service I pay for pointless.

If I connect directly to the Hub3 or disable QoS on the Edgerouter, things just go all to hell, bufferbloat goes through the roof, and I end up with a RTT of almost 500ms and a significant amount of retransmitted packets, even to servers in the UK, here's what it's like without QoS: 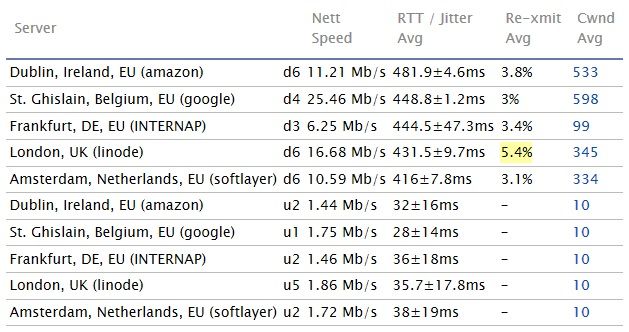 I suspect you are correct though, my connection is unusable for gaming in this state and I'm paying for a service I'm just not receiving if I'm forced to use QoS to make it even approach being usable. I've started looking at other options in my area, I may end up having to cancel Virgin after all these years and go with someone more reliable, which I'll be sad to do after all these years. 😞

Thank you for posting on our community forum pages.

We are sorry to hear that you have been having issues with your services.

We appreciate that this must be frustrating and we'd like to help you on here as much as we can. We wouldn't wan t to lose you as a customer.

If you'd like to proceed with that please let us know and we can advise of the next steps.

Many thanks and we look forward to hearing back from you.

Chade
On our wavelength
3,042 Views
Message 5 of 22
Flag for a moderator

Hi David, thanks for the response. You're more than welcome to take a look at my account, any help would be most appreciated. Do I need to do anything more or just keep an eye on this thread?

Chade
On our wavelength
3,026 Views
Message 6 of 22
Flag for a moderator

Chade
On our wavelength
3,025 Views
Message 7 of 22
Flag for a moderator

Chade
On our wavelength
3,024 Views
Message 8 of 22
Flag for a moderator

Chade
On our wavelength
3,024 Views
Message 9 of 22
Flag for a moderator

As far as I'm aware, going by the info' on these forums, power level look ok. I was getting some Post RS errors before that seem to be gone now, but the poor performance still persists. DSLReports still shows a lot of jitter and RTT of 100ms+ to uk servers. Here's some more information from Sourceforge's tests, these show the unstable latency and jitter along with considerable bloat: