A few weeks ago, we've had a problem with the loss of internet for 3 days (could connect but there was no internet). We've had an engineer come by and fix it. The hub was also replaced with Hub 3.0 (not sure what the previous hub was but might've been Superhub 2ac/Hub 2 as the new hub was plugged into a socket using something that had a label on it saying something along the lines of: to be used only on [device]).

Anyway, we got the internet back again but the connection quality is not good. It got slightly better around a week after when the hub was automatically restarted after calling but the only change was that my PC automatically connected to the 5G band unlike before. When I test the speed using speedtest.net, the download speed might reach around 100 then drop down to around 70/80 Mbps. Sometimes it drops down to around 50, sometimes to around 7 and sometimes to around 30. It's inconsistent.

That's not the only problem as the biggest problem I have seems to be the latency/ping. I've tried testing it and it seems to spike up every few minutes or so (if not regularly). It's unbearable to play online games because of the constant rubberbanding and freezing. Sometimes, for a good 5 minutes if I'm lucky, things would be fine. I can't figure out what the problem is, though the new hub seems really suspicious (I don't know if replacing the hub was what fixed the loss of internet or if the cables were the cause). We've never had this problem before the engineer came over to fix the problem. I do wonder if it's something with the hub, and if using it as a modem will fix the problem since it seems like a lot of people use it with a third party router.

I've also experienced 2 rare occasions where only a specific device loses internet connection (it's connected but you can't go online) and you have to reconnect to get it back.

I've tried the usual things multiple times, resetting and messing around with the settings but nothing worked. As far as I can tell, this happens with all devices, even though the PC is upstairs. I've tried to test the ping with my phone beside the hub but I still saw the spikes (the graph would occasionally spike up to even 1000).

I've not tried wired as the PC is upstairs and I don't have anything to connect it with. Here's what the router status says (couldn't fit the tables in so I used images): 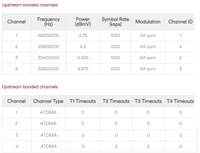 Here's a BQM for today: https://www.thinkbroadband.com/broadband/monitoring/quality/share/453dc636a2e1fdc7ed8689bb23dd7a4e1c...

I've called 2 times but the 1st time I was told to put the hub in an open area (which it already is and I can't move it any further because of the short wire and cable attached to it) and the 2nd time I was told to get a WiFi Booster. Not sure why it would be needed since it wasn't needed before and there were no problems.

I would really appreciate any help I get.

If you must, yup modem mode and separate router is the way to go.

There's nothing wrong with the VM connection. You'd get full speed with a wired connection.

WiFi is very variable and changing between different models of router will give different results. If you want good results with gaming you need very strong WiFi or preferably a wired connection.

If you look at this page you will find lots of advice on improving your WiFi.

Is this really normal?

If so, I guess I'm really disappointed because it just seems like the internet connection was downgraded for no reason. Literally no problem whatsoever with the internet before (gaming was fine, no speed fluctuations, no issues with latency, and so on) apart from that one instance and ever since then, it's impossible to play online and even surfing the web can be inconsistent as often images would load longer.

As before, I mentioned using one of those ping test websites with my phone in the same room as the hub (literally right in front of it). Shouldn't that make a difference? I got the same spikes when testing from anywhere.

Unfortunately I don't think wired is possible but someone did suggest getting a router. I'm just worried that getting one won't make things better and it'd just be a waste of money that I feel shouldn't have been necessary to spend to begin with. If a router were to be bought, would a £30-ish one be okay? Not looking to spend a lot more than that really.

You don't have to buy a router. With your fairly basic requirements you can keep using the router in the Hub and just add a Wireless Access Point, with the Hub's WiFi turned off.

Look for one from a reliable name like Asus or TP-Link. Get one that has three or more external aerials. That will cost £30-40.

Just an update. The router I ordered (TP-Link Archer C50 C1200) arrived a few days ago and I just set it up.

Have not been able to test it in games and others as much as I'd like yet but so far it's better than just the Hub 3.0 (which, when used again, somehow got worse with download speeds going down to as low as 1.5-ish Mbps). Testing the speeds with the third party router, they're still not that good and they're still a lot far behind the stable, smooth speeds before when we had the previous hub which stayed around 100 Mbps when tested, even when there are 12 or so devices connected. With the TP-Link router connected, the speeds are still as consistent as before but at least the connection is more stable (in terms of speed, download speed can go down to 20 Mbps and reach 70, but hovers around 40-50). I don't know why that is but maybe that's because it's quite a cheap router? I'd like to try using it as a WAP next and see how it works from there but I'm not sure how to do that. Do I have to switch back to router mode?

Anyway, I played some online games and while there are still spikes, they're nowhere near as severe as before. It's just not reasonable that you have to buy additional equipment to get barely acceptable performance. Even worse in this case where you literally can't do anything that involves constant connection like online gaming with the Hub 3 since the connection is all over the place with spikes. I wish the previous hub we had (probably Hub 2, I think) was not replaced by this one as it was working superbly before for years, no additional equipment needed (alas, it probably broke down and that was probably why we had no internet for 4 days).

Is there any way to have someone investigate or replace the hub? This is just not a pleasant experience, unfortunately.

Its not 1Gb! you really should of check with us before getting a router that's out dated.

I did suggest that you bought a wireless access point instead of a router. You would get a better device for the same money.

But now that you have installed an additional router, have you set the VM Hub to modem mode?