It’s sometimes difficult to cut through the digital nightmares, but we’ve given it a good go at finding some silicon dreams – here are the 5 CES 2017 reveals that got us talking.

The dust has settled since CES 2017 took place earlier this month, and now the hype has died down, it's time to cast a more considered eye over the abundance of new, smart, connected and in some cases, trivial tech. I mean, smart hairbrushes, anyone?

LG has not only us, but everybody talking with this 2.57mm thick (thin?) flexible OLED TV. This new ultra-thin TV comes in 65-inch and 77-inch variations. To make this thin, flexible display, LG has moved the connections and internals into an accompanying sound bar, which connects to the TV via a flat ribbon cable.

The sound bar delivers a 360 degree sound experience thanks to speakers which rise out from the top of the box, combining Dolby Vision and Dolby Atmos for an immersive home cinema experience.

It attaches to the wall with the help of a magnetic mounting system, which allows peeling away of the sides for whenever you want to show off to your house guests. The 65-inch version is due to begin shipping March, costing $8000 (around £6600), details for the 77-inch model are still to be confirmed. Best start saving up now...

Keeping with the prototypal nature of CES, Razer came to the show with this in-progress triple-display gaming laptop. Arguably the most eye-catching reveal at this year’s show, it closes like a conventional laptop, revealing two additional screens which emerge from behind the main screen when the laptop is open.

Each screen is 17.3 inches and offers 4K resolution for an all-around 12K gaming experience. Support for the displays comes via the NVIDIA GeForce GTX 1080 GPU, which NVIDIA says is the ‘most advanced gaming graphics card ever created’. Other specs are scarce with this being a concept, although it’s based on the Razer Blade Pro).

It’ll be exciting to see what specs are offered if and when this concept is realised, for the time being it’s an exciting prospect.

NVIDIA used CES to announce that it was expanding its Shield based game-streaming service to PC & Mac courtesy of GeForce Now.

Details are fairly limited, though we do know that GeForce Now will allow users to effectively rent high-end gaming PC’s through the Cloud and play games from their Steam library with the processing handled in the cloud and the video streamed to their own computer.

It promises users of under-powered PC’s the opportunity to play the latest games without needing to upgrade their equipment. It’s due to work on a token basis, so using a high-spec PC will cost more than a lower-spec one. It’s an interesting concept and we’re keen to see how it works out in practice when the service launches in the UK. 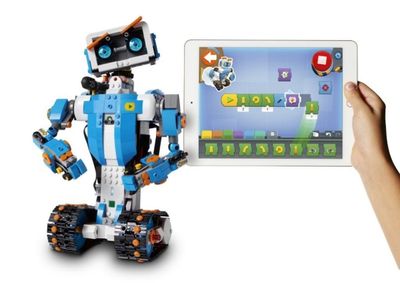 We’ll level with you, this isn’t the most high-tech or innovative member of the list, but it still looks fantastic. Chances are if you were a child in the past 60 years then you played with LEGO, those lovable plastic bricks with the annoying tendency to end up being agonisingly stepped on by unsuspecting parents.

Thanks to BOOST, LEGO is getting a technological makeover. Coding kits are common fare nowadays, and LEGO is entering the market with the ability to build and code robots, models, making use of Bluetooth technology and including motors, buttons and sensors.

BOOST is due to launch in August this year, details are vague at the moment, but this is definitely one to keep an eye on.

On the face of it, a processor is neither the biggest, nor more exciting reveal of CES 2017. However, the Snapdragon 835 will provide the backbone to 2017’s biggest smartphones, and that’s worth knowing about.

Qualcomm says that flagship smartphones this year can be thinner, yet more powerful thanks to the new processor, which is 35% smaller than its predecessor. It offers the latest Bluetooth 5, 802.11ad Wi-Fi and support for Gigabit LTE which could see mobile speeds of up to 533 Mbps. As well as being more powerful, the chip can be configured to offer better battery life on devices.

Expect to see it in both the Samsung Galaxy S8 and Windows Surface Phone this year, as well as in smart glasses, courtesy of ODG.

Did you see anything from CES 2017 that got you talking?

Is there any tech you’re particularly looking forward to owning?

Let us know in the comments below…