How to watch Chisora v Parker this weekend

Dereck Chisora and Joseph Parker headline a blockbuster night of boxing this weekend, and you can catch all the action on Sky Sports Box Office with Virgin TV. 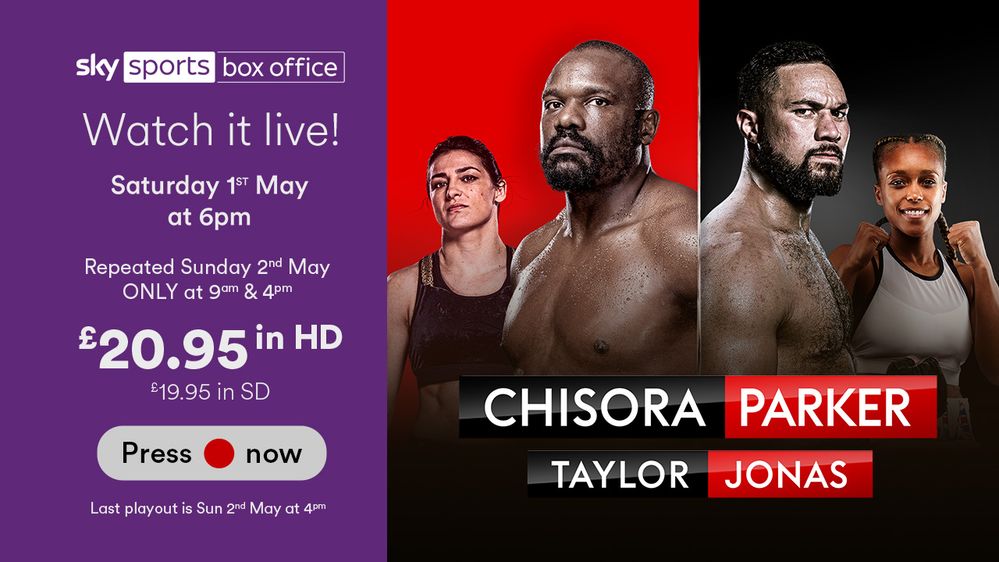 The two heavyweights face off at the AO Arena in Manchester, where Chisora will be keen to bounce back from his defeat at the hands of Oleksandr Usyk in October. He’s known for his resilience and staging strong comebacks after a loss, so discount the 37-year-old at your peril.

His opponent, Joseph Parker comes into this fight on the back of four straight wins. The New Zealander beat fellow Kiwi and arch-rival Junior Fa in February and will be keen to get another win under his belt. It looks like being a close encounter, one that should light the touch paper for a thrilling summer of boxing.

Chisora vs Parker is the main event on a high-quality night of boxing. There are three separate titles on the line before the big fight, as well as the intrigue of seeing local lad Campbell Hatton, son of former light-welterweight champion Ricky, competing in his second professional fight. With all that action it’s no wonder promoter Eddie Hearn has described it as the ‘best card he has ever put on.’

Saturday 1st May. The event begins at 6PM from the AO Arena, Manchester

The event is available to purchase in HD now for £20.95 or in standard definition for £19.95. To buy from a 360 box, press Home then select Live Events and you can watch on the night itself by going to Home > Saved > Rentals.

The fight will be repeated at 9AM and 4PM (last playout) on Sunday 2nd May and can’t be recorded.