I joined in July with the buddle offer and there was supposed to be a free tablet/clock thing, I believe a Lenovo one but I haven't received or heard anything since?

Do I need to claim somehow?

Thank you for your post. I'm sorry to hear this.

Your contract we would have sent you will have details concerning the free offer. Do you still have that so we know which offer it is you're referring too?

I've still not recieved my free Harman kardon Citiation ONE speaker. Recieved Received a text over 2 weeks ago saying it eas about to be delivered by exertis. After many phone calls to them I find out that virgin media haven't even purchased the items and the delivery companies are waiting on purchase orders from virgin to send these out. It's now the 45th day and although I've used the messaging service it's crap and I dont get a response!! 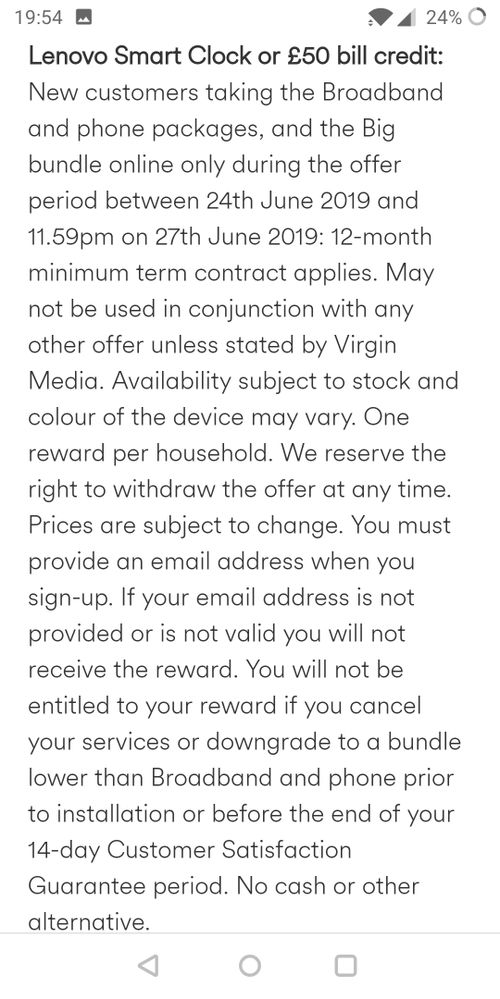 Please see attached big bundle offer. I signed up on the 26th June and when asked I chose the Lenovo clock over the £50 bill credit. I called the customer service team last night but they said unless I can show a contract that specifically shows I was told I was getting one then they can't help. I definitely chose the option when signing up and my contract was signed up in the correct period so not sure what to do next? My contract number is 12-013047643-01.

Thanks for your help

Thanks for posting and welcome to the community 🙂

Sorry about the gift with purchase issue. I'll go ahead and send you a quick PM so I can assist further.

Sorry about the gift with purchase issue.

I'll send you a quick PM so I can assist you further.

I think part of the issue lies with Exertis.
I’ve had to follow up twice reference to my perk of a Lenovo Smart Display when I signed up back in the early summer.

I had received the email stating it was being sent out and will be delivered by Exertis but nothing arrived and no sms was received regarding the package perk.

Welcome to our forums and thank you for commenting. I'm sorry that you've also had trouble with receiving your Gift with Purchase.

Have you been able to resolve this or are you still awaiting delivery?

No I never received anything and the last response was that it was being looked into.

If you could investigate further that would be great thanks!

I can see that you were speaking to one of my colleagues via pm. I've just messaged him to confirm whether he heard anything back following his previous escalation.