scotty2
On our wavelength
1,439 Views
Message 1 of 10
Flag for a moderator

Am seeking clarification on UHD channels and Ultimate oomph customers.

I was already on Ultimate Oomph contract and agreed a new contract on the 22 March, again Ultimate Oomph. I queried whether i should have received the UHD service as part of my package without being charged an additional £6 per month and was advised that I should.

However whilst the chat agent added the UHD service which went live within a couple of hours, my contract has been amended and increased by £6.

Have since spoken to 2 staff on online chat who assured me that the £6 charge has been added in error, and it would be rectified, and my bill adjusted and credited,  but as yet it hasn't been.  What exactly is the situation when an existing Ultimate oomph customer receives a new contract, should they receive UHD or not as part of the package?

I had tried to upgrade using the link provided for Ultimate Oomph customers but it didn't work. https://www.virginmedia.com/shop/tv/ultra-hd

scotty2
On our wavelength
1,424 Views
Message 2 of 10
Flag for a moderator

apologies this is in wrong area. all details concerning contract are correct, but i have V6 boxes rather than 360's, although not sure if that would make a difference or not.

When I renewed a month ago i got the guy telling me its all free to update to 360 and uhd was Included. For 79 quid  I tock it.  Later they tried to charge me 35quid  and I didn't get the uhd.   After posting in the account part of this forum it was all fixed in a day or so.   The staff in the account part of the forum helped so good.  Do you remember the seller saying its all included?  If so I'd  post there. If you get my drift.    Account section is the best place .

Roger_Gooner
Alessandro Volta
1,412 Views
Message 4 of 10
Flag for a moderator

Royalbeech
Superfast
1,397 Views
Message 6 of 10
Flag for a moderator

It is Free to new and existing customer if they agree to a new 18 mouth contract for the Ultimate Oomph bundle.

I needed to phone them up and sort it, as they forgot to tick the UHD box when I started the Ultimate Oomph bundle.

From the website.read the small print. 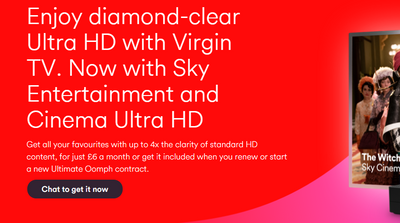 NinjaMeerkat
Fibre optic
1,363 Views
Message 7 of 10
Flag for a moderator

VM keep changing their story on the availability or otherwise of UHD movies and boxsets. Sometimes its free, sometimes its chargeable (amounts vary) and sometimes its only for new customers. I renewed my contract last Feb and upgraded to UO but didn't get the UHD content, i went through a long protracted discussion with various VM reps but then gave up!

Royalbeech
Superfast
1,261 Views
Message 8 of 10
Flag for a moderator

Did you go throught to retentions, that seem tob the only way I get a satisfying answer.

NinjaMeerkat
Fibre optic
1,244 Views
Message 9 of 10
Flag for a moderator

Did you go throught to retentions, that seem tob the only way I get a satisfying answer.

I was told only the UO team could make the change and they would call me to sort it out, I'm still waiting for the call back but as that was last March I won't be holding my breath, VM never call back IME. Life's too short to spend so much time on the phone with VM, I tried to deal with them as little as possible.

I've been advised i should have posted this on Managing your account, and that viewing VM staff would pick up and look at my case. So that's what i've done.

Thanks to all who shared views on this, hopefully VM will resolve now that i've posted in correct area (Account - Cable)