The signal on the upstairs Virgin V6 box is very poor and a limited amount of channels have no to poor signal. The old signal boosters where removed from the house by a Virgin Engineer as they no longer use them. And the engineer installed a piece of equipment (pictured) to the WIFI router which is in the same room upstairs as the v6 box in question. I was wondering what this is called and how i go about getting one to ad to the v6 box to boost the signal 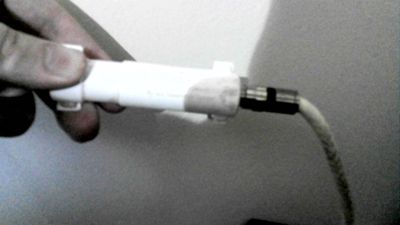 I don't think the image is loading: google drive link:

Thanks for your post and welcome to the community.

The piece of equipment shown in your picture is an in-line isolator (power surge protection). They are fitted if there is no wall socket when a technician visits.

I'm sorry to hear you're having picture quality issues on your upstairs V6 box. Can you confirm which channels are affected? Are you having other issues other than pixelation?

As mentioned this is an inline isolator - I have one in my setup.

Probably best is you explain a little more about your setup (what equipment you have and how they are connected).

Also you mention that an engineer visited an removed a booster - did it work before that? Why did an engineer attend.

There are diagnostic tools on the V6 box that can read signal levels (and other things).

How is your broadband working?

Thanks, Some more information...

The issue with the picture is manly on all but free view channels apart from some channels now and again like 5, 4 ect.

The set up is as following one V6 box in the living room down the stair and one v6 box up the stair in the same room as the super hub 3. In regards to the booster removal the engineer was out to fix the home phone line and also had a look at the other equipment when he was out he say we had equipment that was no longer used by virgin and that the network would work the same without it. In regards to the V6 working after this the v6 box was not installed at this time and was installed a month or two after the removal of the booster and worked when was first installed.

I tried plugin the 'broken' V6 into the line in the living room and it worked down there so some where between the main line and the upstairs v6 there is a broken connection.

The internet works perfect with the speed coming in at:

So it just seems to be the box, i tired a new html cable in case it was an issue at that end no luck i also tried swapping the cable from the internet into it and still did not seem to do anything, my last resort was to factory reset the box and re connect to the virgin network and again no luck so i'm not sure whats going on because as i said the internet works fine the only downtime was with a line fault outwith the house.There is no faults with TV in the area and the other V6 works fine.