Just upgraded to the new 360 and not sure if it like it at all but maybe that's just down to the fact it's very different to the old v6 software but one thing I'm looking for help with is planned recordings.

how far in advance can you see what programs are going to be recorded and for some reason in my series link for Coronation street it's showing the episodes to be recorded on Tuesday but not Mondays.

I know the scheduling has been messed about with due to the sad news about the royal death etc so maybe that's something to do with it.

I know it's been covered elsewhere but what were Virgin thinking releasing this software where you can't set your recordings to new only as I certainly do not want to have to spend time deleting stuff I've already watched.

As always any help greatly appreciated

how far in advance can you see what programs are going to be recorded and for some reason in my series link for Coronation street it's showing the episodes to be recorded on Tuesday but not Mondays.

I know it's been covered elsewhere but what were Virgin thinking releasing this software where you can't set your recordings to new only as I certainly do not want to have to spend time deleting stuff I've already watched.

It depends on the TV guide as to how far in advance you can see planned recordings and some channels on the guide still say " To be announced " when others don't because the data is not available, this may just be a Virgin problem because you can sometimes look on the Sky TV guide and that information is there, so planned recordings for series links only show what's on the TV guide. As for Coronation and New Only recordings if you haven't used the advanced options when setting your series links try the options listed there, From this episode onwards should work, unless the changing start times is causing a problem.

The boxes power mode needs to be set to Fast start or Active start to watch recordings across boxes, this is so they can connect to each other.

The underlying EPG data - which I understand to be common between TiVo & Horizon/360, is a 14day setup. The V6 guide looks to have a correct first-aired date for Corrie tomorrow, so off-hand I can't see any obvious reason for this.

On the mini-box not seeing the main box's hard drive - yes this can be an issue if the main box is in power-saving mode, it needs to be in either Fast Start or Active Start to allow the mini-box to connect to it.

The SL functionality is undoubtedly one of the strengths of the TiVo-software and which V360 clearly has room for improvement.

thank you both of you for your very helpful advice.

just looked at my scheduled recordings and it's only showing 7 days in advance and as far as coronation street i've managed to get it set to record mondays episode but now tuesdays is not showing in my planned recordings although if i go into the tv guide it shows it as being recorded...getting very confusing and I've only had it 2 days 😂😂 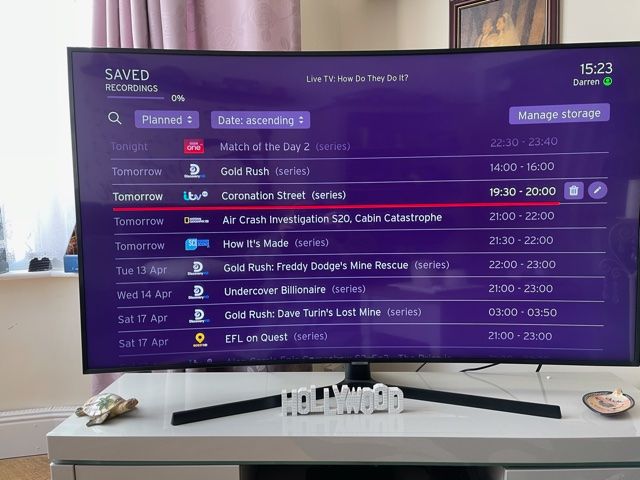 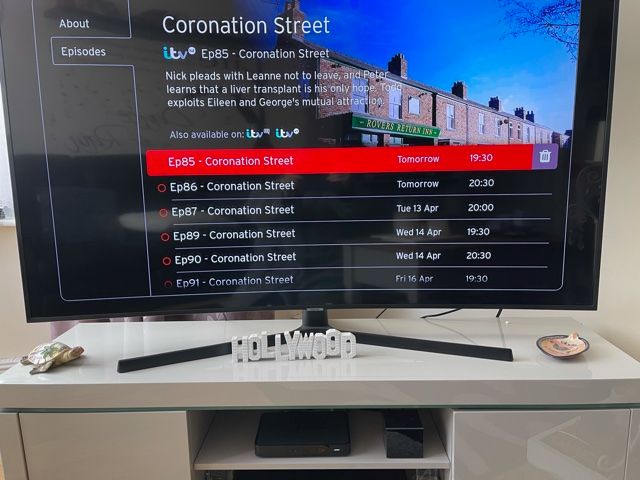 all I would like is all my planned recordings to be shown in the same way as they was on my v6 as that way I can see at a glance what is missing etc...hopefully Virgin will sort things out with software updates.

Remember the first tivo boxes being very poor but they got there in the end.

Thanks for the help

I notice in your second picture that episode 88 isn't showing.

The EPG shows that Tuesday's, episode 87 is an hour long instead of the usual 30 minutes, then the guide shows episode 89, and then 90 for Wednesday.

It looks like episode 88 is the 2nd half of the hour long program.

Which currently correlates with ITV's online schedule. In strange "subject to change" times, checking the broadcaster's own website can sometimes be the best check.

Following on from newapollo's and japitts post's l think the double episode should be recorded OK, the thing you do need to watch is on some channels a film can be split into 2 episodes, if there is a planned break shown on the TV guide for some reason, if you programme your record from the guide it will only record the first episode (half of the film), you need to set episode 2 to record. I think the V6 TiVo handled this better from what I remember unless software update's have changed things.