I upgraded & are awaiting receipt of new remote. I spoke to someone at Virgin who told me that as I was keeping my current TIVO box I WOULDN'T lose any programs that I'd recorded or series links - is this true as it seems to contradict other information?

If you are upgrading a tivo powered V6 to a 360 box you will lose all recordings and series links.

Better to start a new thread than add to an older one!

Roy has given you the right answer though - it's standard practice with any box-swap to lose all your recordings. And when converting from V6 > 360, you do lose all your series links. They are completely different platforms and data can't be transferred between them.

VM help does cover this, under the heading "Important information"... 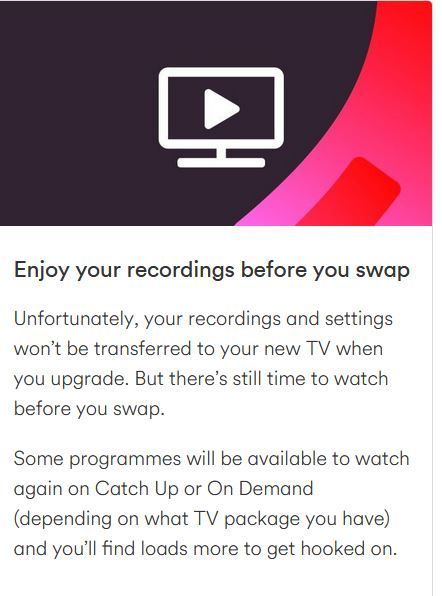 That's what I thought, so why this... 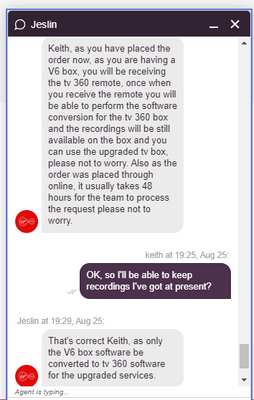 Well done keeping those screenshots, and thankyou for posting them. The staff will probably be along to respond in due course, but I will flag this thread via the VIP-channels incase they want to action it sooner.

Well done keeping those screenshots, and thankyou for posting them. The staff will probably be along to respond in due course, but I will flag this thread via the VIP-channels incase they want to action it sooner.

I would say that judging by the very poor grammar by the VM rep in that screen shot, its more likely a conversation with an Indian call centre VM rep who has no clue as to what or how the 360 box even works.

Hi @keithrose thanks for posting.

I am sorry for any conflicting or mis-information you received regarding the 360 service.  If you need any help I am more than happy to look into this on your behalf.

Thanks Lee, updating Box tonight so hopefully all will go well!

Thank you for letting us know @keithrose.

How has it been since updating the box? Is the issue still ongoing?

The update worked fine, so far so good with the 360, I'm sure the picture is slightly improved, particularly on BBC. It also works better with my amp (an old Yamaha) which previously I had to activate with its own control.

The issue I had was with losing previous Tivo recorded programmes, which of course did happen, but found a lot of it on catchup.