postmodboy
On our wavelength
1,471 Views
Message 1 of 16
Flag for a moderator

I may be missing something but just got my new Virgin Oomph package.The box contains Modem (no problem installing) and two seemingly identical tv boxes. No instructions in the box. I plugged in the topmost of the two boxes assuming this is the main box. After it fired up it was showing TiVo, not the 360 interface. I waited the recommended 30mins but no change. I then installed box no 2.This fires up with the proper TV 360 interface. Go back to box number 1 and this still loads as TiVo.

The box showing TiVo is manufactured by ARRIS according to the back of the box (though the accompanying slip says HUMAX just to confuse things!) with MODEL NUMBER 1008C-STB-VM.

They lack of instructions is frustrating but I need to know which is the main and which the 2nd mini box advertised in the offer. Secondly how do I get the one showing TiVo to upgrade to TV 360 - should I reset the whole box?

You have been sent an Arris V6 instead of a Humax mini box which is half the size of the main box.

I’m sorry but you will either need to call in to fix this or wait here for the Virgin Media staff which may take up to a week.

postmodboy
On our wavelength
1,457 Views
Message 3 of 16
Flag for a moderator
Helpful Answer

Thanks Ernie. That would explain it! I’ll get in touch with VM.

postmodboy
On our wavelength
1,343 Views
Message 4 of 16
Flag for a moderator

Yep got it sorted, mini box due Friday. Thanks again for the prompt and accurate response. Thought I was going mad and done something wrong!
0 Kudos
Reply

No problem. Pleased you managed to get through and issue resolved.

postmodboy
On our wavelength
1,138 Views
Message 6 of 16
Flag for a moderator

Having contacted VM after a long wait finally got through to a helpful agent who said they would despatch the correct VM mini box to arrive in a couple of day's time. A week later with no delivery I spent another 45 mins plus waiting to speak to another agent who said they would despatch immediately. On Friday a package arrived. Great. Then a couple of hours later a second seemingly identical one arrived, which I sent back with the courier as I don't need two boxes and didn't want the hassle of trying to find out how to get hold of a return label. Odd that the first agent's instructions couldn't be verified by the second - what kind of system is that!  However on opening the first package it looks like they've sent me a second full 360 box! Which of course doesn't work on the same account - just says cannot load settings. Whether the second package would have had the correct mini box I don't know but it was the same size package so assume it may well have been another full 360. I'll never know. So now waiting on hold to get VM to send me the correct mini box which will hopefully work. Phew what a saga.

What a sorry episode.

I will escalate this to see if the Virgin Media staff members here can help, although it may be tomorrow now.

Thank you for your post and welcome to the community.

I'm very sorry for the frustration in getting the box sorted for you.

I have taken a look on our side and can see you have spoken with an agent today who arranged for the box mini box to be installed.

Please do let us know if you require any further assistance with this.

postmodboy
On our wavelength
1,061 Views
Message 9 of 16
Flag for a moderator

Thanks for replying Martin.

The agent I spoke to in fact said that I wasn't eligible for another box issue! I can see that they might be worried I was trying to scam boxes or something but he said he would revert me to Tivo and I should reinstall the Arris box and he would arrange for an engineer visit sometime in February. I said woah, I'm not being reverted to the Tivo system as we have 360 up and running on our main TV, it's just the lack of a mini box which is the issue, as our son can't watch TV in his room which was one of the reasons for upgrading (his really old style TiVo box stopped working some time ago). I also pointed out that we ordered the upgrade but were sent the wrong equipment and then now a different but equally wrong box so not fair that we should be denied what we ordered and are paying for. He said he would email about this seeking a manual override on the block so hopefully this will work. I have today returned our old equipment (plus the new but wrong Tivo box we were sent) as per the instructions using the label enclosed in the Oomph equipment packaging. I'm hoping that once this is received, plus the duplicate order we received on Friday this will free up the system to enable a mini box to be sent out.

One question - what do we do with the really old Tivo box that no longer works, ? It was far too big to fit into the Tivo packaging anyway. Should we recycle via VM or just take to our local council recycling depot? It's dead as a dodo- no power light showing even. Also, when hopefully the correct mini box arrives, how do I get a label to return the 360 box we have here?

I've attached a photo of the old secondary box that no longer works to show which one I'm referring to. 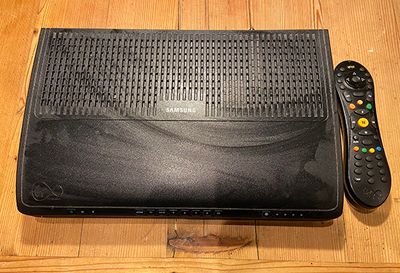 The old Tivo are not required back by Virginmedia and can be recycled at the local council tip.