Please someone help me!!

i can’t even use the phone to make any calls. They are charging for something that I shouldn’t be paying for.

I wish I would never use virgin media or virgin mobile. They made my life hell.
their customer service stinks

so what is wont on the bill?

Basically, sometime in October may be on the 17th I called virgin mobile to get a contract with an iPhone 11 black colour. After the conversation with the sales team, I have received an email with the contract details where it says that I have ordered a purple colour phone. So I called them straight away to fix that mistake but they started saying that nothing can be done with that contract. After that I said ok then cancel the contract and order me a black colour phone as I can not use the purple colour phone. Then that person saying I can’t cancel the contract either, so I asked them why, am I not calling within 14 day time infact it’s not even 14 hours!? Then they started saying don’t worry about that contract, when you receive the phone give us a call and we will do it straight away and now I will order a black colour phone for you. I said ok let’s do it then.

After few weeks I have received both phones and I called virgin mobile to ask them To cancel the contract and how can I send the phone back to them. So they said they will send me a bag to return the phone back to them. After few days I have received a letter with a plastic bag inside it, so I called them and couldn’t talk to anyone.
At that time I was looking for other ways to contact them and I found a way to talk to them by texting on the app so I have asked the question in there, which address should I send the phone back to?
after a while someone replied and said I should have the address on the letter so I sent him a picture of the letter and he has confirmed on the message that I should use the address given on the right corner of the letter.
So on the same day I went to post office and used recorded delivery option to send the phone back to them.
For some time I did not hear from them so I thought they must have got the phone and all sorted.
Some time in December I have got a call from virgin mobile again saying That they didn’t get the phone yet. Then I got a bit worried that something is wrong with Virgin mobile. Luckily I kept all my receipts for my package with Royal Mail and I gave all the details to virgin mobile. Then they said they will open a complaint case on my behalf and they will investigate. Once the investigation is completed they will come back to me with the result. On the 20th of April I have called them to discuss the matter but I was shocked to know that  they sent me a letter saying they think I am liable for that phone and I have to pay for the phone. So I started looking for that Letter and found it. On that letter they Gave me an option to contact a third party if I am not happy with that so I have contacted that third party company.
on the next day I started checking my bank statement where I actually pay for virgin mobile and I saw some unbelievable charges so I called virgin mobile again.

Now they have cancelled all my services and when I called customer services, they can’t help either

all they can do is ask me to wait 72 hours for someone to call me back, until then I can’t make any calls or message or use the phone internet.

Thanks for your post and reaching out to the community forums. We you able to track the parcel to see if it showed as delivered? If so then then this can be removed from your account. Did the letter from the complaint state why you were liable? Did you get a complaints reference number?

I have tracked it down and it shows as delivered. Please see the attachments. 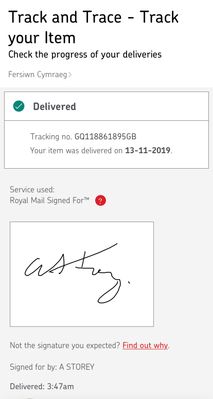 I have tracked the parcel down and it shows that the parcel was delivered on the 13th of November. However virgin is saying that I have sent the parcel to a wrong address but I have the proof that I have sent it to the address that I was advised from virgin and I have the text messages for that as well.
I have the ref number for the case, which is COM103964201.
please try and help me with it