Hi, i've seen the notices about 5G now available from Virgin Media. I am in a contract with the Oomph Unlimited SIM.

Does anybody know if the 5G upgrade will be rolled out to existing customers, or will I have to wait until contract renewal? Similarly, would I need a new SIM or could I rely on the existing one?

For reference I have a two month old Samsung 5G phone.

I spoke to technical team on webchat and they said if you had a 5g device you'd be automatically switched once in an area with Virgin 5G coverage.

Sounds really unlikely to me and confirmed as highly unlikely here https://community.virginmedia.com/t5/Virgin-Mobile/5G-transfer-for-existing-customers/m-p/4590019#M1....

If you get any info or are in an area with coverage and can confirm that the switch doesn't happen automatically please let me know and I'll get back in touch.

The phone would have to be logged on to Vodafone for that to happen.

It would require Vodafone to be set in the connections setting of your phone and 5G selectd  It also requires VoLTE to be on in order to make voice calls over 5G.

The phone either runs EE or Vodafone not both.

Here is an actual setting page from my Vodafone. Now on Virgin it may show a network difference, but if you can't set network mode to include 5G or set VoLTE to on it is not 5G enabled and moving into a 5G area will not change thing's. The phone will ignore 5G 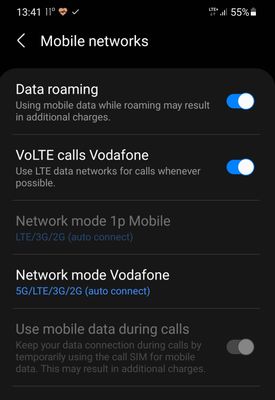 Hasn't happened for me and I am in a 5G area.

According to the t&c which seem really badly written you need to have a "5G sim plan", which wasn't an Oomph option but now is .

So where I have the ultimate oomph unlimited data, a new selection of extra fee capped data tiers exist between the bundle one and the upgrades... one of them is called 5G and is capped at 5gb or something like that..  The way the press release was written it suggests those on a "4G" plan as the legacy are called will stay on EE and therefore 4G until VM switch everyone to Vodafone at the end of the EE agreement. People new to VM who choose a "5G" plan will be put on Vodafone and as long as their phone is capable get 5G.

That suggests those already signed up to 18months on the fastest broadband and biggest tv package bundle who then selected their "ultimate" deal with unlimited data sim won't get 5G until 2022... i.e. their best customers they really wanted to upgrade to their most expensive bundle will be the last to get it!

Sounds about right. So much for "The Best of everything" tagline on the ultimate oomph page.

I also had a laugh when I just saw this but on there about the "dedicated support team". How on Earth do you get through to them? I was on the phone for an hour and a half last week just trying to give them my PAC code to bring my number across. VIrgin Mobie team said I needed to speak to Virgin Media as the SIM is part of a bundle then VM said (half an hour on hold later) that I'd have to speak to the dedicated team cos it was Ultimate Oomph. After another 40 minutes on hold for them I gave up.

I can see why they changed the name from VIP package...
0 Kudos
Reply

I've been on Ultimate Oomph for about 18 months now and earlier this week checked on the status of Virgin and 5G. After seeing the posts here I decided to wait a few weeks before chasing Customer Services about the upgrade (lockdown means limited need for use away from home wifi).
Imagine then my surprise to see 'something happening' on my phone (Galaxy S20 5G not from Virgin) yesterday - by mid afternoon I seemed to have a stable 5G connection. I live in a borderline 5G area and during an exercise walk the signal seemed to change to 4G then back to 5G as I neared home again.
Earlier in the week I did check some settings on my phone but am sure I didn't change anything, changes to allow 5G connection seem to have come over the network. Maybe others on at least some Oomph packages will get similar updates? I've often complained to Virgin when service has been inadequate or worse but this time for me things seem good.

I noticed today that I connected to 5G. I have a note 20 ultra.

That sounds positive, fingers crossed! I can't see any change in my settings as of yet.

I'm nowhere near 5g so will have to wait til lockdown ends or I go back to the office to see if anything happens.

Hook, are you on an Oomph package as well?

Yes I am on an oomph package.

I'm back home now and don't have 5G indoors here. But my original location was less than a mile away.