I have had an issue with failed texts being repeatedly resent by Virgin Mobile.  What, I hear you say, surely that's what you want them to do, keep trying until the network receives the message.

Well, not if each message is actually being received by the recipient and each text is costing you £2.10.

Well, did I not get a ping to tell me the first text I sent was not delivered, and then a text from the competition line telling me "Thanks for the entry", that's entry four and free five.  I then get another ping to tell me my second "WIN" text also failed, and then a fourth, fifth and sixth text from the competition line thanking me for my entries. 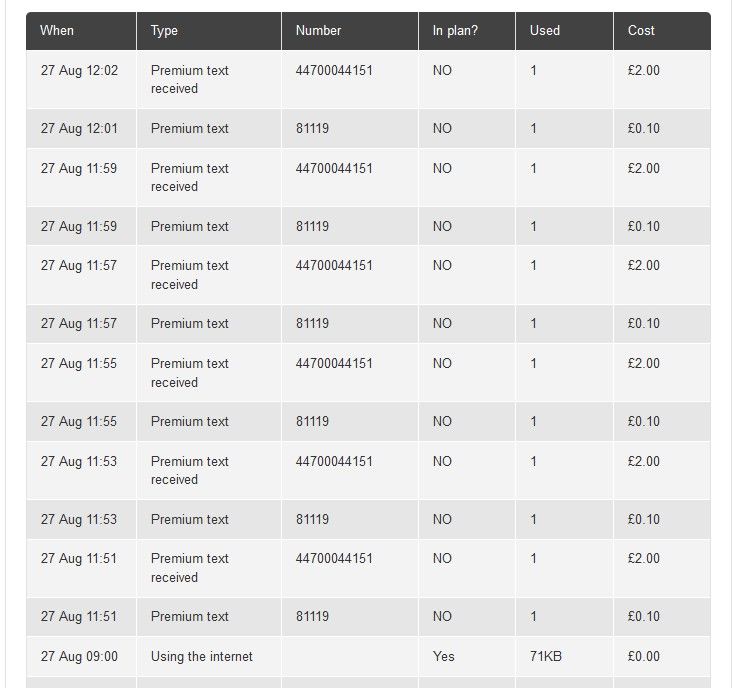 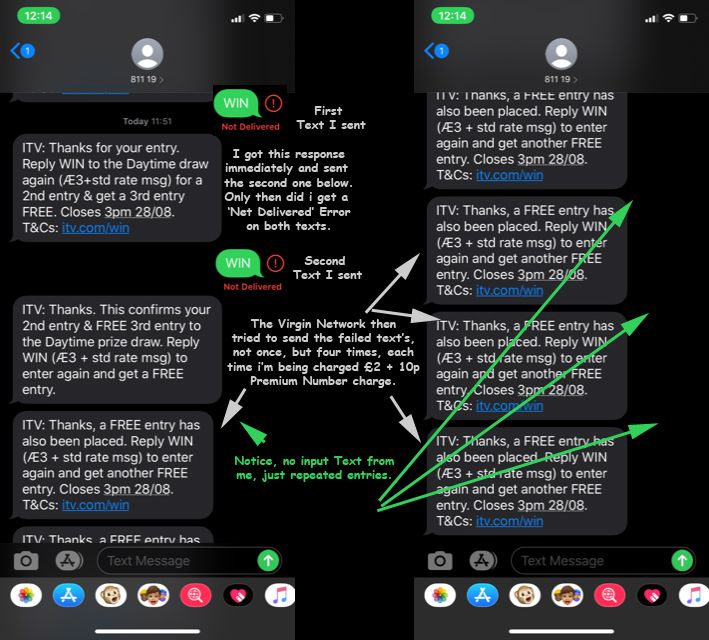 Above you can see the text thread, two texts sent and not delivered. (for this image I had to copy and paste the second green "WIN" into the position of the first as I panicked when I got the fourth and fifth text responses from the Comp line and deleted the first text to try and stop it resending.), it didn't, I got a sixth, then an automated message fro VM to tell me my self imposed Spending Cap of £20 was reaching its limit, and then the proverbial started hitting my internal fan.

Iris did refund the £8:40 for the four £2 competition entries and the four 10p Premium Texts, but made it out as this was a gesture of goodwill from VM, with no acknowledgment that the issue was of their making, and that as can be seen from the text thread above, there was no text input from me for the third to sixth entries.  Iris suggested I put STOP in my texts to prevent this happening again, but as it was the VM Network that was resending the texts in the background this would have made no difference, now, would it?

I suppose, rather than there being a real question here, what I'm looking for is if anyone else has had this issue with the VM Network resending failed texts repeatedly and the recipient telling you, "I got your text....., in fact I got eight of them", and why is this happening?

Re: Not Delivered Texts resent repeatedly.

Sorry inconvenienced caused , The issue is here you should hold down your finger on the failed messages and delete them. This is iOS issue this isn't down to Virgin-Media re sending failed messages. Please give this ago.
I work for Virgin Media - but all opinions posted here are my own
0 Kudos
Reply

Re: Not Delivered Texts resent repeatedly.

Thanks FrogFC, must look I'm into see it there is a way to stop my iPhone doing that.

I had used your suggestion to stop the first one after I had received the third auto text and was panicking at this point, hence the reason I had to copy paste it to show the text thread flow in my image.

I wish the VM lady could have told me this about iOS, but maybe they are reluctant as the phone is on contract with them and they don't want to admit there's an issue.

Thanks again for the wisdom.