My account has just been swapped from EE to Vodaphone. My house seems to be in an area with poor Vodaphone coverage. I expect to have an unreliable phone service. I was expecting a problem - I bought a cheap Vodaphone SIM to test coverage and it did not look promising. Being prepared, I now have test figures from before and after the change, and also a test with a Giffgaff SIM in the same phone.

With EE I had full level in the Android indicator which dropped to 2/5 on Vodaphone. Although not up to the EE level in measurements, O2 was also considered full level by Android. It is a little odd - the O2 and Vodaphone masts are co-located. I think the O2 one may be higher and gets over the intervening hill crest better, but I am surprised there is much difference. EE and Three have another location on a hill that is not obstructed from my house.

It would be nice if I could be swapped to O2 instead of Vodaphone but I guess that might take 5 years, so I may just have to abandon Virgin Media if phone calls are now poor quality. I have checked the network data speeds and they are OK for my use, and even if they were poor it would not matter when I am at home as the phone would use the WiFi.

Does anyone have any helpful suggestions for increasing the signal in my house?

If Vodafone and o2 are sharing the same mast I'd expect that you'd pickup the 800mhz frequency 20 EUDD that the Giffgaff o2 SIM does.

For comparison, here's my VM/voda signal that does pick up the EUDD 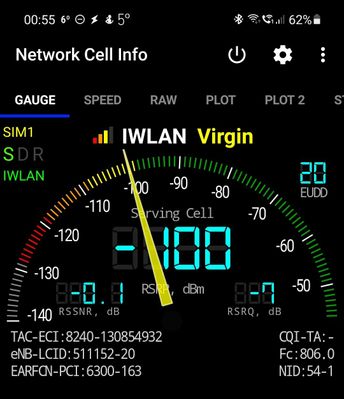 -74 dBm, you must be quite close to a EE mast. Of course if you have a WiFi calling  capable phone, the signal at home becomes less important.

So your Vodafone signal is 2100Mhz This is quite common now since all their 3G 2100 Mhz bandwidth has been moved to 4G.

Giffgaff is coming in at 800Mhz which has longer range and better in building penetration.

As mentioned is your phone is capable WiFi Calling should solve the problem.

-117db is weak but usable. There will be a Band 20/800MHz signal available on Vodafone which it will drop to if the signal falls to around -122db.

O2/GiffGaff depend far too much on congested Band 20 whereas other networks prefer to use other bands if they're available, even if they're weaker, which offer higher capacity.

Ultimately, if you're in a location where a specific network performs better... you've probably answered your own question. You need to move to that network directly, or at the very least an MVNO who does use that network (with a view to moving if they move, as is happening with Virgin Mobile currently)

I've long reasoned that there are circumstances where an MVNO's inherently price-driven model doesn't suit, and I suspect the OP might tick those boxes. I would potentially save a few pennies by moving my mobile service to Virgin, but I consider the extra service & facilities that I get by being operator-direct, as more than worth it.

Everyone's circumstances are different, of course.

Thanks to all the above posters for your helpful answers. You have given me various bits of guidance and information that I did not know, including guidance that it may just be OK! Time will tell..

Unfortunately, my phone will not do WiFi calling. Vodaphone seem to suggest you may have to buy a phone from them to do it unless you have an iPhone.

Vodafone WiFi Calling is different to what is on offer with Virgin so going on Vodafone's list is unhelpful. Virgin is limited on what phones do their WiFi Calling.

What phone do you have?

It's a Nokia 7 Plus - a bit long in the tooth. It's past getting Android updates and it does not have the WiFi Calling option in the menu under Calls where I think it should be if it had support for it.

Definitely not on Virgin's list.  Mainly Samsungs running Android 10 up and supporting BTU versions of the Firmware. IPhones of course and one or two others.

Since the switch my signal has virtually dropped to zero, so I am unable to make/recieve calls
Switching to EE which has a mast in our village
When I spoke to Customer Service yesterday they told me that If I was to go on a better mobile package the problem would be cured - Really !