VickieB
On our wavelength
1,119 Views
Message 1 of 6
Flag for a moderator 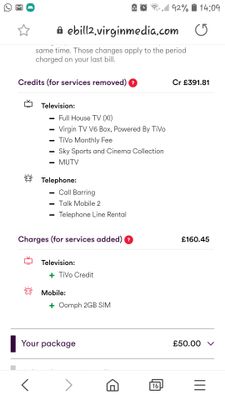 Can someone please help me with my bill.

I previously had 3 tivo boxes, sports, movies, landline and broadband package. When my husband was furloughed we had to cut back on our spending so we got 2 fire sticks and cancelled everything except the broadband.

While I was on the phone to Virgin the guy said they were sending out sim cards to customers to help out, even though I said I didn't need one I still received one in the post. The sim card hasn't been activated and is in a drawer at home.

The guy was quite vague about when our services would be cut off as apparently his system was giving him 2 different dates. He did say that our next payment would come out as usual at the c£150 but then they would owe us money.

I said that was fine and when I got my bill recently I noticed that the credit for services removed was £391.81.

Further down there were two charges, one for TiVo credit and one for the SIM card, totalling £160.45.

My account shows that I'm in credit of £181.36, I have absolutely no idea what these charges are for and I didn't agree to have a pay monthly SIM card. The guy said he had to run a credit check as they were making changes to my account not that I was being signed up for a monthly contract.

I really hope someone can explain this to me as it's really baffling me.

Thanks for your post. Looking at the image you sent the top value would be a prorated credit for the unused portion of your services going up to your bill cycle date. The TiVo Credits would be the reversal of the credits applied leading up to that same date, since you no longer have TiVo Boxes, your bill cycle date is viewable in the billing details. The SIM cards as you have correctly stated are also added to your bill. I can only advise speaking with the team to have these removed if you did not want them.

That still doesn't make much sense to me with it showing as a charge.

Can you tell me who it is I need to speak to about having the SIM removed please?

I've been having nightmares lately, if it's not the broadband issue, it's the billing or the SIM card. I've spent so much time on the Community pages lately and with multiple medical conditions/disabilities it has been really stressful.

It would be so much easier if I could actually speak to one person about it. Each time I reply to a message someone else gets involved and I have to start explaining everything all over again and their advice contradicts the last.

I'm sorry to hear that you have these charges and that you're still having issues with your services. I've private messaged you but can't seem to find anything back.

I'll pop you another message - you'll find it from the top right hand side of the screen.

I replied to your private message on Thursday and again yesterday with my security information. Have you received either of them?

Apologies VickieB - you should see a private message in your inbox now.