I read with interest other people having this problem. My box has been doing this for some time. Until recently it was very occasionally. Now it's every morning. It's suggested that the box will come on when recording. Occasionally I will be woken up in the early hours by the sound system. The box may have red light(s) on showing it's recording. I hadn't noticed at 2 or 3 am if the green light was on, although I think I would have done. I turned off the sound system only. But, now the green light is also on.

1). Once it's stopped recording or updating, shouldn't the box go back on standby?

2). Shouldn't only the red light be on showing it's recording and not the green light

2). I record breakfast news (from 8-9am) and have done for years. Until the last week or so, it has not switched on, or at least, I have not heard the sound and when I went to watch the recording (about half way through at 8.30am) only red lights were on showing it was recording. Then I would turn the box on and the green light would show (as well as the picture, of course). Now at 8am I hear the sound and the green light as well as the red are on. 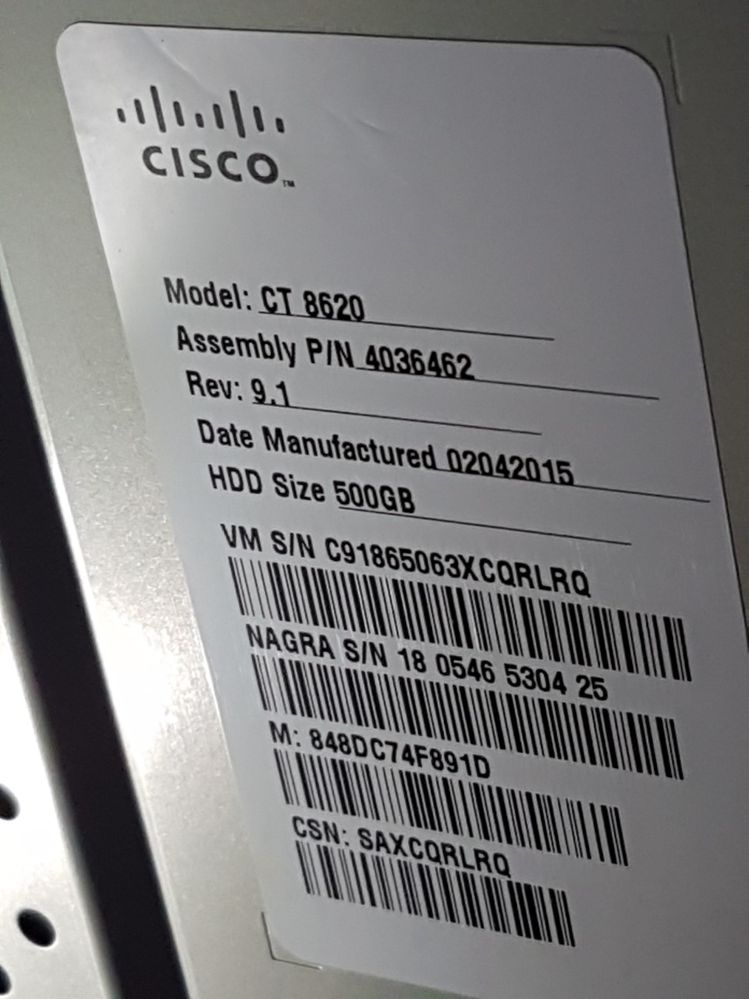 I've occasionally been caught out overnight, leaving the AV system on and the (old) TiVo in standby. Software flash overnight, box reboots, bang... sound at 2-3am. Moral of the story? Sound kit off overnight, or at the very least in mute.

Planned recordings, software updates and (6hourly) EPG refreshes will all cause the HDD to spin up.

Looks like you've got one of the older TiVo boxes (check here ) - if you have VM broadband, then the V6 box has superceded this since several years and would be worth considering a swap to. If you've had your current package a while, you may be able to negotiate a newer (possibly more cost-effective) bundle that includes a box-swap.

Thanks for that. I have to turn the sound off from the mains and, to be honest, At midnight, when I go to bed, I often forget. However, I usually remember to turn the volume down. Bizarrely, this hasn't worked in the last week or so. Are you sure I haven't got a ghost playing games?
Thanks for the update suggestion. It is something I have considered.
The only problem is that it appears there is no way of transferring saved programmes to a new box. I have been away on travels last winter and still working my way through programmes I recorded. It looks like I may never catch up, though!
0 Kudos
Reply
Highlighted

@motoguzzibob wrote:
The only problem is that it appears there is no way of transferring saved programmes to a new box. I have been away on travels last winter and still working my way through programmes I recorded. It looks like I may never catch up, though!

There isn't. If your box fails or is replaced for any reason, you will lose everything on it.

VOD is a lot better than it used to be, and depending what you have recorded, you might be surprised by what's available.

If you would like to get your box replaced with a new V6 box now or when you have caught up with your shows we can arrange a box swap from here. If you would like to do what @japitts suggested and change you package you would need to get in touch with the team, using the below methods and they will be able to look into your package and offer one of our latest deals.

Your box isn't faulty.  It has been coming on regularly due to overnight engineering work in your region.  That work completed this morning so you should now get some peace

Actually, it didn't come on this morning, but yesterday it did. In the last month, it came on about 10 nights in the month, must have been a lot of work. It sounds like a strange system that causes that. But, if it switches my box on why not switch it off? It all sounds rather unusual!
0 Kudos
Reply
Highlighted

Boxes powering themselves down are covered by your power saving options. I don't believe VM can technically power your box up from standby - they can just remotely reboot which has the same effect.

Thank you. So reboot has the same result as if they could power my box from standby? In other words, the end result is the same. I've just had a quick look and note that VM succeeded in getting access to my box at about 1pm today and will be having another go at 6.40 pm. As far as I'm aware, my box did not switch on this afternoon. If it did, it went back to standby. On the occasions I have mentioned, I had to manually turn the box off/ put it back on standby, but not today. Regarding power saving options I have tried both "snooze on" and "sleep", there is also a "snooze off" which I haven't tried, although I'm not clear what they mean. Am I looking at the wrong thing?
0 Kudos
Reply