GerryMarshall
Tuning in
1,200 Views
Message 1 of 6
Flag for a moderator

Recently My Virgin Media V6 box has started to identify my Netgear router as an additional TIVO box and allows me to see the folder structure on the SSD attached to the router. I can traverse the structure but none of the files on the disk are visible.

1. Has anybody else seen this
2. Is there a particular suffix the files need to become visible
3. Can the files then be played through the V6 box 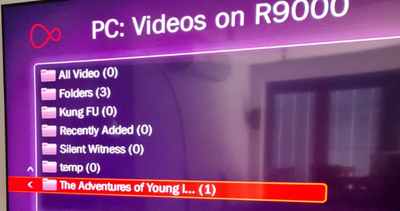 The naming "PC:" would also seem to suggest it thinks it is a PC,

Roger_Gooner
Legend
1,180 Views
Message 2 of 6
Flag for a moderator

The V6 is a STB which has no capability to play files on another device. Also, its own USB port is only useful for charging.

GerryMarshall
Tuning in
1,106 Views
Message 3 of 6
Flag for a moderator

I am not sure how this is relevant to the questions I actually asked asked. Please elaborate.

"The V6 is a STB which has no capability to play files on another device.". The V6 can obviously play files FROM another device. Such as another V6. This entry appears as an additional TiVo box alongside the second V6 that I have.

"Also, its own USB port is only useful for charging." I made no comment on the V6s USB port. The Directories in the picture are the directories from an SSD disk connected to a port on the Network router.

The Netgear router storage is being labelled as a PC. This indicates some level of classification by the V6 box identifying the storage as an additional TiVo box and classifying it as "PC" and using the name of the router.

There was a capability for TiVo boxes in the US to play media files on a USB devices attached to a router, but that was axed years ago. When TiVo ported their software to the V6 they should have removed the code which used to enable this.

If I plug an ssd into my router and tick the Tivo box the disk comes up as another Tivo box on my V6.

Originally I could only see the directories and asked in my original question what file type was needed for the file to be seen by the V6 box.

The Netgear docs say mpeg1 and mpeg2. Sure enough on recoding a video to mpeg1 it appeared as a file in the previously empty folder structure.

files with non-mpeg1/2 such as mp4 (regardless of naming) do not appear leading me to think the V6 is checking the format.
You are wrong sir! How about you help rather than give off the cuff answers that are clearly wrong! This is the second incorrect answer you have given.

The file would not play due to a content restriction.
It is rather obvious to me that the code has not been removed from the V6 box (in the UK) as I would not have got this far. It may be that it has been crippled in some way but it has most definitely not been removed (why you think it should is beyond me).