So on my never ending quest for higher upload speeds I gave in to temptation and ordered an upgrade to Gig1.

I couldn't find much information about it anywhere so thought I'd note down my initial impressions here in case it helps anyone else.

The Hub 4 arrived on the promised day within the two hour time slot that Yodel had sent me that morning.

I received a text message from Virgin advising me to reply "GO" when I was ready to set up.

The documentation that comes with it is very basic - just a very simple walk through of disconnecting the old router and connecting the new one.

Up until now I have been on the 350M connection and thankfully had no problems at all. TBH I was wondering if I'd done the right thing upgrading so early, felt a lot like a guinea pig.

I then connected a stand-alone PC directly into the Hub 4.  I have a fairly complex setup of router/switches/powerline adapters/WiFi access points etc, but wanted to start with the simplest setup.

I flicked the power switch on the back of the hub and it lit up. It also immediately started making a fast repetitive clicking noise. I don't know if it has a fan in it or some other moving part. It sounded a bit like a HDD whirring.

There is a single ring light around the top of the hub which lights different colours and flashes at different rates to tell you what's going on. After a bit of white slow pulsing it changed to green and flashed on and off indicating it was downloading new firmware. It then rebooted and started the white flashing for a bit. I wasn't timing it but after maybe 15 minutes the light stayed on white and then dimmed down.

I confirmed I had an internet connection and then browsed to 192.168.0.1. The menus are very similar to those on the Hub 3, nothing too exciting.

I did a couple of quick tests at speedtest.net and was a little disappointed to see only around 350Mbps down, but I could see 54Mbps up so it looked like the correct service had been provisioned. I checked on the Hub menu and the downstream config was set at 1200000450 which looked to make sense. I've no idea if there's a technical reason but I previously seen new services take a little time to get up to speed, so thought I'd plough on anyway.

I then switched the hub into Modem mode (which causes it to reboot) and connected it into my router (Draytek 3900).

I then did some more speed tests and was getting a different result each time, varying between say 300 and 800. The upload speeds were more constant generally between 50 and 60 Mbps.

It was noticeable on the speedtest.net app that the needle was jumping around a lot when running a test, first high then dropping down really low then bumping up bit by bit.

I tried http://www.dslreports.com/speedtest and got varying results out of that too. It would usually start off fast then tail off.

I got the impression that the variability was related to the Virgin network rather than mine, as nothing else was running here and repeating a test as soon as one finished would give different results.

The documentation comes with a QR to scan for the SamKnows inbuilt speedtest. However I think that relies on you having the Hub in router mode rather modem mode as it couldn't find anything for me. Samdoesntknow.

I then spent a day working with this setup. From time to time I'd run different speed tests and again get different results.

On a few occasions it seemed that the internet connection stopped completely. No devices could get any responses - although it wasn't showing up as no connection. After a minute or so trying to open different browsers etc it would start working again and go pretty fast straight away. It was as if the Hub had fallen asleep and needed waking up.I have BQM set up and that hadn't shown any issues at these times, hence i think it was the hub rather than the Virgin network. I've rebooted the hub so we'll just have to see if it happens again.

I'll paste in some speed test results below so you can see the variability. You can see on the DSLreports one the difference from the previous 350M connection which was fairly constant.

To be honest those differences in speeds aren't going to make a whole lot of noticeable difference in the real world. However if they are typical I suspect they will result in lots of complaints to Virgin from people saying they're not getting what they're paying for.

I also suspect that a lot of home setups won't be up to the 1Gbps connection anyway and no doubt Virgin will end up getting moaned at when it's out of their control. I think adding Samknows is a smart move for this reason. It's a shame I can't seem to access it when in modem mode.

Overall for me the jury's still out. If I could have read the above before I upgraded I would stick with the 350M for a while until the 1G is more established. I suspect there's a few issues lurking but we'll see. 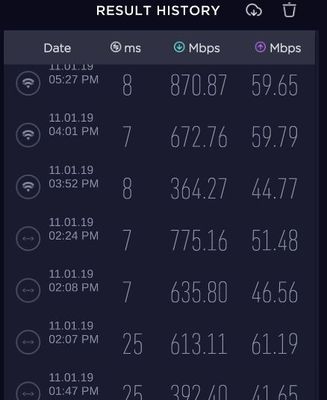 Hope someone finds this useful.

This is like mine I got today I have had no stable download speeds not hitting anywhere near the 1Gb speed. The Hub has no lights I no its needed but lights even just on the ports would be helpful. I just got a big loud clunk off mine and rebooted. I am not using this in router mode as again why use the Puma 7 when they know its still has issues.

They have tested the line and I should be getting the correct speed but again I am not will give it 24 hours but they have said some people in Manchester have the same issue.

Doing some speed tests show the Hub is not as fast as my ASUS  RT-ac87u.

I do hope there is a fan in there as its really hot to touch and smells like it too.

Hmm, just had another episode when all devices were losing any connectivity to the internet. When it happens I can't even browse to 192.168.100.1,so I don't think it's a Virgin network issue, I think it's the hub and suspect it's a firmware bug.

I've rebooted the Hub 4 and it's working again now.

Just found another issue with my hub. It is using both the 192.168.01 and 192.168.100.1 to access the settings page in both the modem and router mode it like it can't tell what mode it is in.  Also the settings are not saving first time, tried to sign a name to a MAC address and it told me it was saved but it does not show up as the name just the MAC. The UI is very slow and very buggy with saving settings.

chenks
Community elder
2,344 Views
Message 5 of 31
Flag for a moderator

are you sure you don't mean that both IPs work when in router mode - which is normal?
i very much doubt you can can access the hub on 0.1 when in modem mode though.

I've just tried again now and it timed out, I then tried via 192.168.100.1 and that timed out as well. So currently can't access the settings via either route.

chenks
Community elder
2,336 Views
Message 7 of 31
Flag for a moderator

if either of you can post a screenshot of the hub being accessible on 0.1 whilst in modem mode then it would be helpful.

both working when in router mode is normal IMO though.
0 Kudos
Reply

If it happens again I will grab a screenshot. It's definitely not consistent behaviour though.

Sounds like the firmware for the Hub4 has been written to the same standards as the Hub3!

The hub 4, like the hub 3, is another Arris box and produced to meet the same levels of customer (LG/VM) requirements.