JulianFr
On our wavelength
1,046 Views
Message 11 of 33
Flag for a moderator

Thanks for the update, I'm in Easterly Close and they haven't quite finished the work yet.
That date would be amazing, my BT contract ends start of July!
0 Kudos
Reply

Closer than I thought - I'm just one street down so can potentially see your house out the window from here.

They just finished ours at the start of this week (Only took them around a week to do) and must be moving upwards towards the vets - I'm guessing you are in the same block as me and we'll be connected at the same time.

The guy I spoke to reckons demand will be quite high so best to get in ASAP when they start offering as I'm sure engineer appointments will filled up fast and there will be an increasing wait list.

JulianFr
On our wavelength
1,025 Views
Message 13 of 33
Flag for a moderator

I'm looking out for where they're adding all the cabinets. I've got one right across from me which I guess is what they call L4 in this photo, not sure where the L3 would be but I guess we'd be sharing that one.

They seem to have dug some huge holes just around the corner from Spar on Channel View so that might be where the VHUB to cover the whole of Brackla will be installed.

(if that image isn't showing up it's here: https://www.chatteris.biz/blog/wp-content/uploads/2018/02/Virgin-Layout-version-3.jpg ) 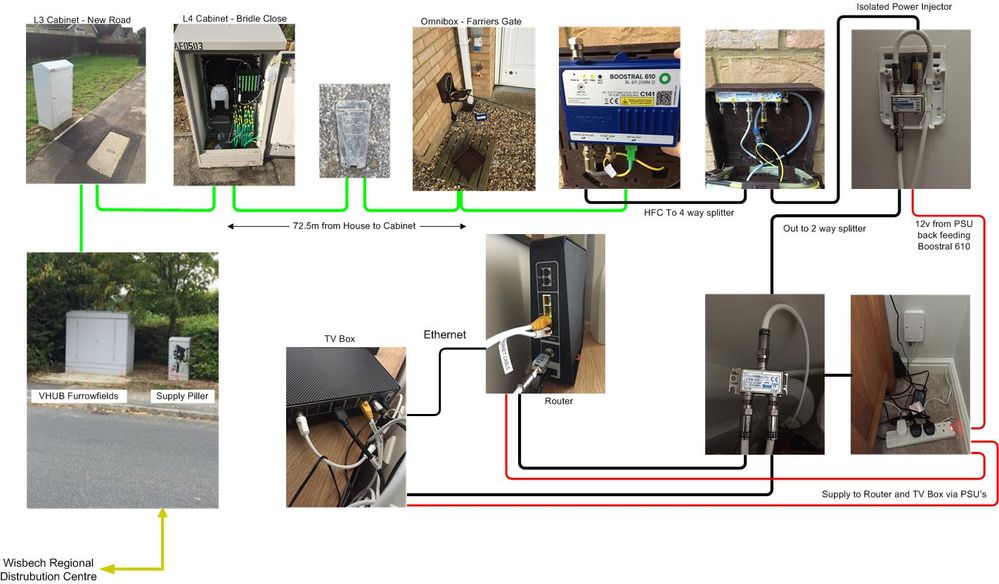 I wasn't too familiar with their network setup to begin with - I didn't realise there was another level, thought it was just vhub to the street cabinets.

I thought the Spar would be the spot for the Vhub as well, but walking up that way the cables for our L4 box seem to be going up that way.   I believe the BT cabinet for the area is just over the road from where they are digging so it may be there's an L3 cabinet being put there.

On one.network one thing that stands out is there's a roadworks permission out for the longest period out of Brackla, starting before all of the others and ending after/at the same time as the last street ones, up near Archdeacon school, so it could be that this is the hub.  Would make sense as it's quite central to the whole of Brackla.

You're right that does seem more central. I found another vhub while I was out running, it's on the road towards Laleston just after the traffic lights to go into Broadlands. You can see it here on google maps.

I put in the post code for there on the virgin site, CF31 4ES, and I was able to see the packages we'll probably be able to get for an idea of price.

I'm not so sure that you've seen a virtual hub, their dimensions are typically 180cm x 170cm x 65cm (wxhxd) with a nearby power cabinet.

You might be right, looking at the size of the one I posted before what I saw is much smaller.

I just came past the Spar and they're installing 2 boxes right next to the post box just down from the park.
One box that looks similar to the L4 is already there, might be the L3, but there's a base for a much bigger box to go next to it.

If that's where they're putting the V-HUB then we couldn't get much closer.
0 Kudos
Reply

Re: Expansion to South Wales

Still waiting on the rollout - Can see on Western Power are currently scheduled for running new power lines on the same bit where the new boxes are near the spar so assuming this is related.  I know each 'block' is around 500 houses but not sure what that translates to in Brackla, they are still fitting out the horseshoe with cables now so it could be once this is finished, some of these are scheduled to last until the 17th though.

Had a quick peek at a postcode in Cefn Glas as these houses have had Virgin set up for a while now, Virgin have just rolled out a 500mb only package which is now available as previously you had to get their ultimate bundle including phone and TV to get the higher speeds.

Re: Expansion to South Wales

Thanks for the update. Got confirmation from BT a week ago that my contract has ended with them so ready to go as soon as it's available.
0 Kudos
Reply