I’ve started getting this message on my iPad when I try and watch a recording, not sure why it thinks it’s not on the same network, any ideas please?

Assuming you are running iPadOS 14, Chechen that you have the Virgin TV Go app enable in the iPad Local NetworkPrivacy settings: 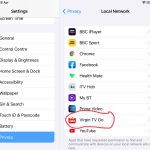 Thanks, I have just checked and it is enabled.

Oddly, straight after I posted the question, it started working and has worked all evening.

Last night when it stopped, it would not start again at all so I decided to watch it on the tv connected to the mini box.

This kept saying ‘buffering’, telling me the 360 box was offline then finally said ‘Failed to play recording’ and then finally started working.

I must admit, I’ve only just changed over from Sky as I wanted the Fibre BB but the virgin software definitely appears to glitch more than Sky ever did.

Many thanks for your posts. I'm sorry to hear of the error message you've been receiving on TV Go via the iPad.

Just to understand a little better, does this happen with any programmes in particular?

As for the issue you've described with the 360 mini box itself connected to the TV, has the error occurred again since Thursday?

Are you experiencing any other issues at the moment with any devices connected to your broadband hub?

I’ve not watched tv on the mini box since but it had happened before.

tv on the main box if fine.

Having problems on the iPad again tonight, same message telling me I’m not on the home network.

Set it to record the football on BT sport, watched the first half live.

At half time switched it off, came back to it to pick up where I left off from the recording, same message again telling me I’m not on the home network.

It won’t even let me watch it live either.

I’ve switched iPad off and on again, closed app, turned WiFi off and on, nothing seems to work.

Half an hour later, live tv works on the app but can’t watch any recordings!

Considering I watch most of my content on the iPad, this is becoming an issue.

Deleted the app and reinstalled it.

Is it working this morning or still same error message?

I’m so disappointed with this service, i’ve ended up leaving Sky for super fast broadband but now can’t watch TV on the iPad.

Can you check if the box is in low power mode or eco mode please?