I have been trying to Log into TV on the Go every time I am asked to log in. When I do this it returns an error message 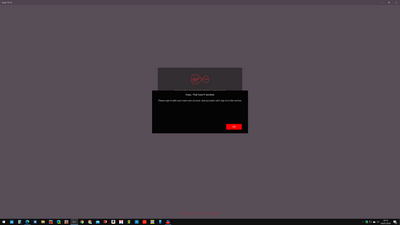 I am definitely using the right account. This is happening on both my Windows 10 PC and Galaxay S7. Have checked my account profile etc with Virgin Media and nothing has changed

Thanks for your post and welcome to the community.

I'm sorry you're having problems logging in to TV Go. I can appreciate you'd like to get this fixed.

If you've checked on various devices and browsers and still getting this error message, then I'm going to need to raise this to our IT team to investigate and fix.

I'll pop you a private message now to take your details and pass security.

I'm having same issue. Can you help me too please.

Hey Melissa, both my devices are displaying this message since yesterday.

I spent over an hour waiting to get through to someone on the phone as I was hoping to watch the football yesterday afternoon and when I finally got through guess what they said to me?

Yep, word for word your reply here: I'm going to need to raise this to our IT team to investigate and fix.

When the promised return call didn't come - I rang back, guess what they told me the second time?

It's a known issue and we're working to fix it.

Not working again as of 8.30 this morning.

I've been with you for more than ten years and when it goes wrong there's no transparency, no hands up, just frustration, lengthy phone calls and no resolution. You're so expensive for everybody except new users, you have no qualms charging for services you didn't provide and using a default fobbing off. It's literally shocking.

We are currently looking in to this issue, and looking for for further information.

Can you please all confirm you are using the same details that you use for your online account log in?

If you're using the app, can you please remove and re-install it?

If you're still having problems, I'll need to check your details on your account and once that's done I'll need a screenshot of the error message.

Please message me if the above haven't worked, and give me your details so I can check.

Because Virgin are taking the mickey out of us again.

This is day eight for me without the app.

In that time, seven or eight hour long phone calls, three calls from ''technical support'' and most recently, having spent half an hour explaining my problem in detail to a customer retention adviser I was put through to VIRGIN MOBILE who said, understandably, ''Nothing to do with us'' and hung up.

There's a pinned thing at the top of the page saying it's a known issue - funny how every ''technical support'' member I've talked to hasn't heard of it and the server status says no known issues.

I've ended up missing all the BT Sport games that have taken place since the restart, except for the very first one, and nobody at this company gives a flying fig roll.

The funny thing about the pinned note is it says you may experience issues on IOS, Android or the Desktop version of the APP.

In other words EVERY possible way you can use the app won't work.

The mods say ''I've sent you an email to take you through security'' but don't, then you get an email but all it says is ''you've ranked up''

I don't pay huge amounts of money every month to Virgin to be given a gold star for signing into community - strangely enough, I pay it to be able to watch football which I can't do.

A similar experience to mine, day 8 of no TV anywhere, and the quandry of either missing the match this afternoon or finding a hooky stream again, all because somebody at Virgin Media made a terrible mistake last weekend & nobody there seems to know how to fix it.

I did get some intervention by private message from the web team finally last night, but whatever they did, which suggested it would be working within the hour hasn't worked.

That pinned fault has been there for over 4 months. Although it sounds the same as the problems we have been having for the past week, I didn't have this problem back in March, and I'd usually use TV Go every day, so I'd have noticed. So I assume it's just the usual bad housekeeping from VM. Also that fault makes no mention of trying use use TV Go in browser, which isn't working either.

Hi I have been raising this issue all this week it has been escalating to a senior tech Thursday, still waiting for an update so far nothing and the issue is still happening

Sorry to hear about the issues you are having with TVGo
We were made aware of an issue regarding the failed signing in message
This was raised and investigated and now it has been fixed
Are you able to sign in okay?
If not then please let me know
Gareth_L