So there I was quite happily watching the football on BT Sport 2 and all of a sudden its gone. apparently I am not on the internet! followed the screen prompts but it still hasn't reloaded. and yes I am connected to the internet. 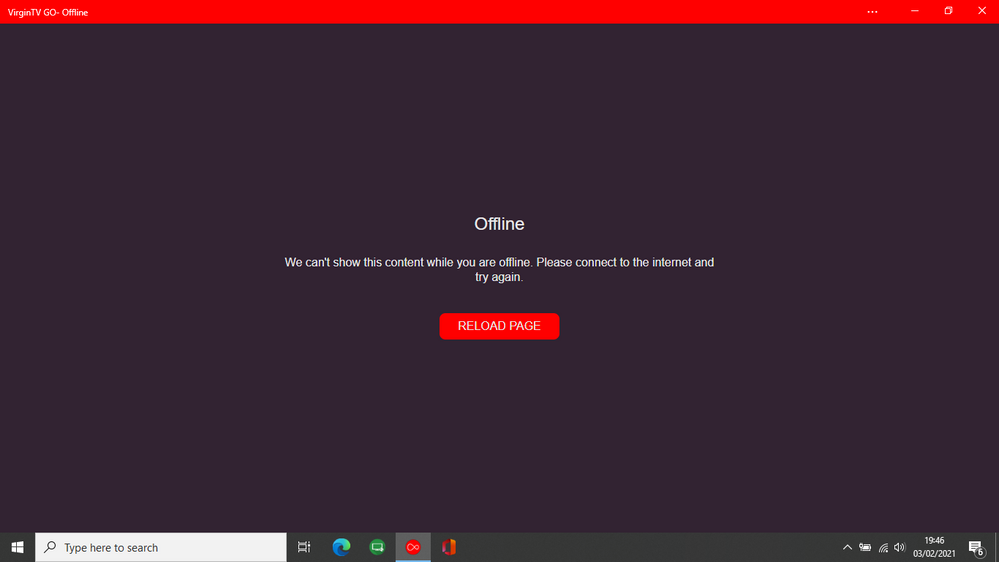 Same for me. Just saying it’s not available 🙁
0 Kudos
Reply

Once again the app has stopped working during a live sports broadcast.

Is this happening to anyone else and does anybody have any solutions.

This seems to be happening more and and more frequently.

Me too, kicked out of the Leicester game and cannot get back in.

Why does this happen? I've been watching the football for nearly 2 hours and then "Service not available" pops up on the screen.

I restarted my Chromebook and the app several times.

I missed the end of the football. Thanks very much.

The most annoying part of it all? Your immature and totally unnecessary use of the word "Oops" on the pop-up. Grow up and fix these annoying glitches.

Re: Virgin TV Go "Not available"

We had this issue too.   Technical fault at VMs end.  Some of the error messages such as 'you're not online' were misleading. We were not offline and could still surf the internet.  Most accurate error message displayed is shown below:

At the same time catchup and on demand services via our V6 box also stopped working with error code 202.

Clearly an issue at the VM 'server site' and lack of resilience.  Thankfully back after about 10 mins.

We were watching two football games at once - one on our TV on BT Sport Ultimate and other, the Leicester match, on my Windows laptop with the VM app.  I guess others were doing the same, and the Liverpool game was coming up at the time.  Overload?  This shouldn't be an unusual scenario though.

I've lodged a complaint online - I guess I'll get told to check my cable connections again.....

Thanks for your post and I'm sorry that it has taken so long to respond to your original query.

I was trying to do the same when the service went down for around 30 minutes and the service was returned, are you still having issues with the TV go service now?