Dcompton
Dialled in
1,401 Views
Message 1 of 53
Flag for a moderator

Tvgo doesn’t work on iOS 15.1 either. I get the same messages as everyone else is reporting. Yesterday (13/11/21), I had a call from the tech team after complaining to the chief executive! We went through the exact same processes as before, reinstalling, changing password etc etc etc. He then asked if I had a lap top to try and sign in on there. I do have a lap top but declined to try this as when I’m ‘on the go’, I put my iPad in my handbag, not a laptop, which clearly defeats the issue of having a smaller device when ‘on the go’!

Anyway, I was unable to log in on iPad mini, my current iPad or my iPhone 12, all of which are up to date software- wise. The tech then asked for my password and managed to log in his end using my old email address!

I was still using my blueyonder email address on returning to Virgin 9 months ago. I’ve been using a Blueyonder email since I originally joined Virgin many years ago. I left to go to Sky for 12 months, then returned to Virgin earlier this year, still being able to use my old blueyonder email until about a month ago when it disappeared together with tv go. Originally I was told that it was disabled as I had left Virgin (even though I had been using it for well over 2 years, from leaving to rejoining Virgin. Apparently I had ‘slipped through the net’ for the 90 day removal period lol. it was then said that it had been quarantined as a security measure. It was subsequently reinstated but by then I decided to use my iCloud email instead, just in case it was removed again (on the advice of Lee a VIP on the forum). Still no TvGo! Both my old Blueyonder and iCloud addresses are accepted on other Virgin apps, so, to me, it’s the App, not ME as suggested. Also, all the complaints about Tvgo are now rectified and I’m seeing old posts (such as this one). NO IM NOT! There’s STILL numerous complaints identical to mine!

The executive team have said there’s some mix up between my original Virgin media account and my new one which is why TvGo isn’t working. I don’t believe this for a nanosecond! If true, then DISABLE my donkeys years old account then! I can only assume then, if this is correct,  that the tech guy used my original virgin media account to sign in. When I tried my Blueyonder (still active)email, I don’t even get the the chance to sign into TvGo. I immediately get  the following message : Sorry - this isn’t available. I’ve been trying to log in on the browser rather than the app as advised. If I try and log in on the app using my old blueyonder email , the username and password aren’t recognised but if I enter my account number, it says I already have an account but STILL no TvGo using the details suggested. Nightmare tbh.

I’ll send the following if it helps, but I doubt it will. So, whichever way I try, either using the virgin media browser or the app, or either email address, nothing works. The tech guy has raised a ticket AGAIN. The last ticket still hasn’t been acted on so I doubt this will be either.

Good luck! No one has managed to rectify this so far!!

Lynda70
On our wavelength
1,442 Views
Message 2 of 53
Flag for a moderator
Helpful Answer

I feel your pain we have uninstalled installed, sent screen prints etc etc for over a year. They try to close the case off but we wont let them. The 2nd line support have rung 3 times this week. The latest call we had they ended up just hanging up. They make us feel we are the only ones with this problem! I was also told this week they cannot do anything. Sooo frustrating.

Dcompton
Dialled in
1,437 Views
Message 3 of 53
Flag for a moderator

I’ve just been in touch with Apple Support. There’s absolutely no reason why Apple devices are the cause of the problem which is what has been hinted at to me by the tech team. My iPads and iPhone are able to log into every other Virgin App except for TvGo. The Apple Support assistant had me doing everything that Virgin have suggested (reinstalling the app, using the website to sign in, new passwords etc etc). He also checked Apples technical data ( and sent me a screen shot as proof) and there is absolutely NOTHING from Apples end that is causing this issue. Virgin are hinting it’s Apple devices causing the problem as they don’t have a clue why it’s not working. Apple said it’s a developer problem and that it needs scrapping completely ( as opposed to software updates), and starting from scratch. I suggest as well as this, they take a sharp intake of breath and ask Sky how they have managed to get their version fault free. They’re that far up their own backsides though, I can’t see this happening. Thanks for your reply though x
0 Kudos
Reply

I'm hoping this will help with your ios problems using TVGO.

The same applies to @Lynda70  please check and try the advice by @Ernie_C  on the following thread.

I realise the thread is about being unable to play recordings on the devices but @ Dianna your screenshot shows the following aren't being picked up on your devices.

I'm hoping it's a straightforward fix in the device settings as per post 2 of that thread.

Can you check if the Virgin TV Go app is enabled in the Local Network Privacy setting on the ios devices?

Dcompton
Dialled in
1,420 Views
Message 5 of 53
Flag for a moderator

Hello, excuse m6 ignorance, but what and where is the Local Network Privacy setting on my ipad please?
Regards
Dianna
0 Kudos
Reply

Dcompton
Dialled in
1,406 Views
Message 7 of 53
Flag for a moderator

Dcompton
Dialled in
1,392 Views
Message 8 of 53
Flag for a moderator

It doesnt show on ours either Dianna

I’m late to this thread so apologise if I don’t have all the facts.

It is interesting that the Virgin TV Go app is not contained in the Local Network Privacy settings on the iPad. I would suggest deleting and re-installing the app. When any app that requires Local Network access is loaded, there should be a pop-up requesting access to the Local Network. It would be useful to see what happens.

It is possible from the data you presented earlier that this could be an account related issue as you have ‘Anonymous’ in the Customer HH field.

Compare my Diagnostics data with yours and you will see the difference: 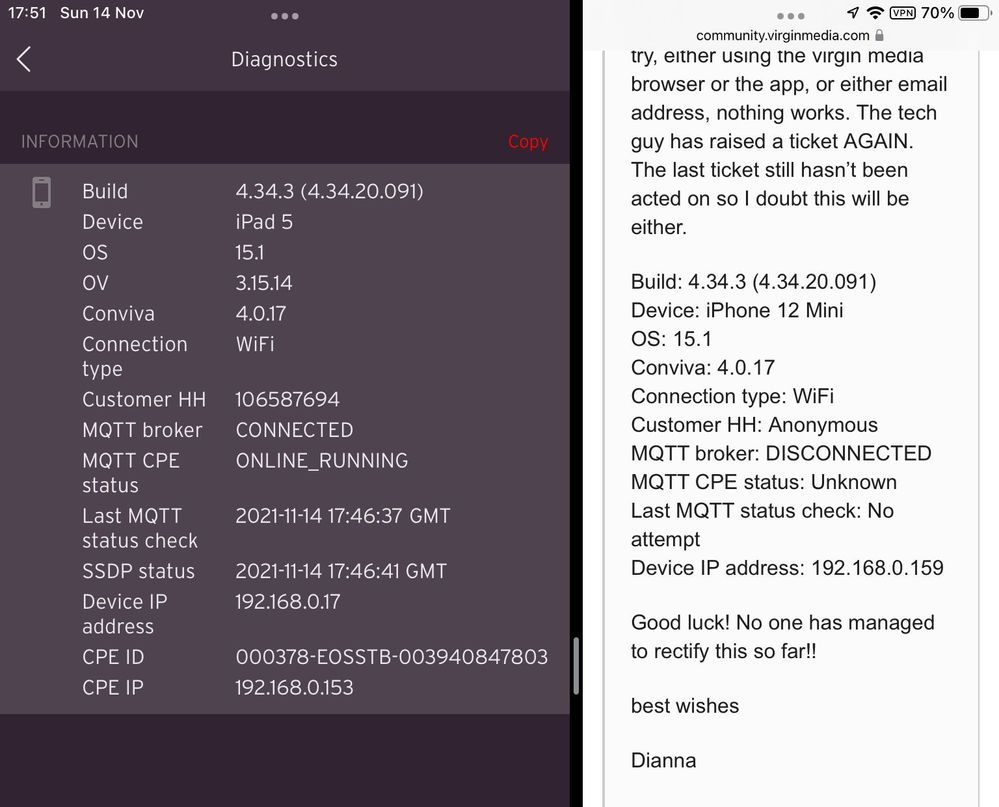 I’m not sure what the Customer HH value is but it must be account specific to validate you have access to your TV 360.