Only available on tv

Hi.
I got a 360 box which I was told I could watch all my recording on the app and live TV well it’s now been 8 weeks I been with you and I for one WONT be renewing my contract with you on these lies. Yes I deleted it from my iPad and reinstalled it and SIGNED IN to my account.

1) I have not been able to watch anything live on my iPad on home Wi-Fi that the 360 box is cabled to the router and I tried doing it Wi-Fi as well.

2) I can’t watch any recording as it keeps saying this message in the picture or tell me to register for bbc iPlayer or itv ect the idea of having ONE app is so I don’t have to have hundreds of tv apps to flip through to find the program I want to watch. I was told while I’m charging my EV car I can watch anything in my recording on 4g well that not true unless there is something your not telling me. 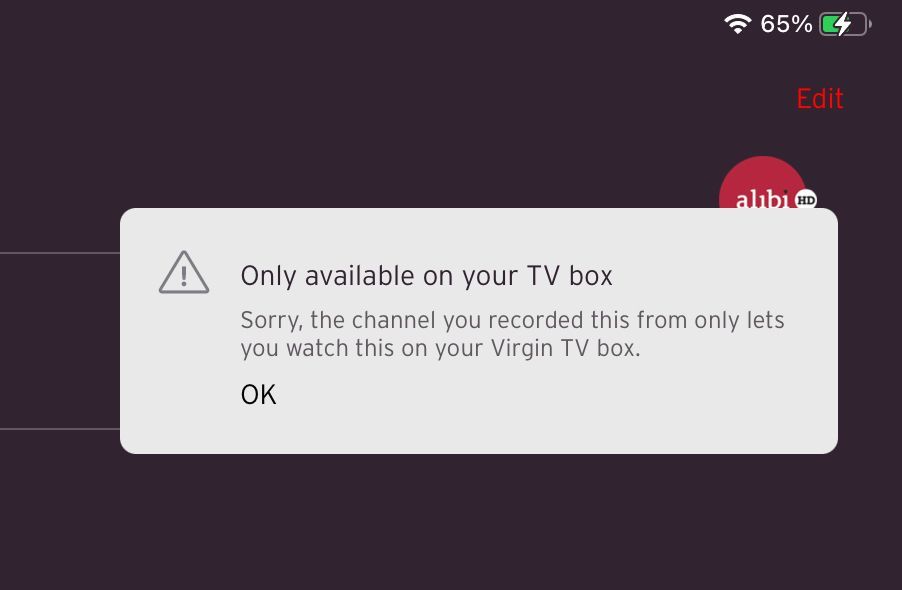 do I have to buy the extra box then to unlock the unlimited viewing because if so I’m not happy about it as I was told I could air play it on my Apple TV from my iPad not try that yet as the app don’t work.

Thank you for reaching out to us in our community and welcome, sorry to hear you aren't able to watch anything on the app and keep receiving the message only available on TV, I have been able to locate your account and can see the TV 360 Box is showing as unavailable, is this switched on and is there a white light on the front of the box?

Yes the box is switch on and yes I have NOT been able to watch anything on the tv as well as I have been trying to explain to you on the online chat which you don’t understand and I was hoping this would be fixed by tomorrow as I’m working and like to be able to watch tv on my break.

Due to Licensing BBCiPlayer needs to be a separate App, ITV plays okay though

So I can look at this in a bit more detail

Can I send you a private message to pass security

My colleague was trying to help you via PM with this but I see you chose not to pass security.

Can you give me an example of the recordings not viewable?

Sorry for the confusion @Confusedtv.

Just to clarify, do you get that error when watching anything at all on your app and on your TV? Do you get this same error with your TV box? If so, are you able to reboot your TV box and let me know if the issue persists? https://www.virginmedia.com/help/virgin-tv-restart-or-reset-your-box#tab2.

So I guess I’m not going to get a working tv or do I have to contact the ombudsman as I’m getting no support from virgin media with this.

you have not even updated the account details yet and your causing a lot of distress when your emailing me.

Thanks for your response @Confusedtv,

Reading the thread in full, it seems that our attempts to assist over PM were not possible as you we're reluctant to run through data protection with a member of our team.

Without data protection being passed on an account, with the account holder, our hands would be tied