Why am I seeing this message when I go to Virgin Media website"Sorry we can't update your Web Safe settings at the moment. Please try again later. Your previous Web Safe settings will remain active." I really need to access this as I need to block some 'chat websites' from my teenage daughter.

If you're trying to block some websites, can you make sure that Child Safe is enabled? If you log into your account and click "My Apps" - "Websafe" and enable "Child Safe", are you able to make the changes?

No, when I go to Virgin Media I get s pop up that says "we can protect you from Web Safe" I click on 'find out more' and it takes me to my app where there is a yellow banner across the top saying what I quoted previously. Underneath it there is info on Website and F-secure and where I should be able to click on 'add web safe' nothing happens when I try and click that or the get F-secure buttons.

Thanks for popping back pennyp29. Can you clear your browser cache and try again? Please take a screenshot of the error page and upload it here (remember to blank out any personal details).

Also have you been able to access and use Websafe before?

Hi Lisa, I cleared it and tried again but no luck. I don't think we ever activated it in the past as we didn't have a need then.

Have attempted to resize a screenshot for you. 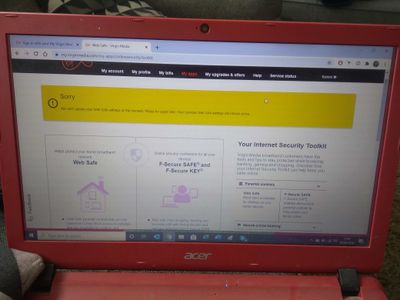 Sololobo
Community elder
2,312 Views
Message 6 of 35
Flag for a moderator

For future reference, you can take a screenshot on Windows 10 using the PrtScr or PrintScrn (or similiar) key on your keyboard.It's located on the top row of the keyboard near the Function keys. There are several options available

Press PrtScn. This copies the entire screen to the clipboard. You can paste the screenshot into any program that displays images, like Paint or Microsoft Word.

Press Alt + PrtScn. This copies the active window to the clipboard, which you can paste into another program.

Press the Windows key + Shift + S. The screen will dim and the mouse pointer will change. You can drag to select a portion of the screen to capture. The screenshot will be copied to the clipboard, which you can paste into another program. (This shortcut only works if you have the latest version of Windows 10 installed, called the Windows 10 Creators Update.)

Press the Windows key + PrtScn. This saves the entire screen as an image file. You can find it in the "Pictures" folder, in a subfolder called "Screenshots."

You could also use the Snipping Tool to grab a screenshot and save it as an image file without first pasting the screenshot into another program.

It's easier to use one of the above methods than having to take a picture!


It's What I Do.
I Drink and I
Remember Things.

Only mark a post as helpful if your issue has been resolved.
2 Kudos
Reply

I can see the picture now (was waiting for the system to accept it). I'm going to send you a Private Message so I can take a look at the settings. Please reply back to it so I can help.

mgrimshaw
Joining in
2,248 Views
Message 8 of 35
Flag for a moderator

I have the exact same problem.   Its not computer specific (happens on mobile, different machines and browsers).  My account is a very old account, i suspect websafe isnt available to it hence this.  It makes the website unusable (unless I hack at the page to remove the overlay).

Please let us take a look from here and see what we can do to help. I'll send a PM shortly to confirma few details & hope to hear back from you soon.

mgrimshaw
Joining in
2,245 Views
Message 10 of 35
Flag for a moderator

This is it in action...  its happened for year.  I once had a remote control session with a member of your team that went on for hours.