ludenscallida
Joining in
4,830 Views
Message 41 of 80
Flag for a moderator

Still blocking everything if you add a rule for a single device.

If you go into wireless then Mac filtering it seems to work on mine, only full time though you can't select time ranges. Obviously Virgin don't care as this box has been around a few years now and there not done anything about it.

ludenscallida
Joining in
4,811 Views
Message 43 of 80
Flag for a moderator

Still takes out all connected devices on mine - humpf!

terryparrott
Tuning in
4,539 Views
Message 44 of 80
Flag for a moderator

I sent an email to the VirginmedaiCEO Tom Mockridge over the weekend. Today I was contacted me by someone in his Exec team who refered in turn to someone in the engineering team. In short his response was that "Virginmedia do not support MAC filtering or blocking" .

I have asked to have my HUB 3 replaced with a Super HUB 2AC on which I now MAC filtering does work.

Thanks for the update but they made that clear a long time ago. Well done on getting a 2ac. They wouldn't let me have one so I run in modem mode with an Asus router which has masses of functionality,

It is more simple than you might think - the MAC filtering WORKS - but probably because of software glitch it doesn't work over midnight hour of 0000.

BUT because you cant set it in minutes using the hub itself (the slider is in 1h spans) then you have to do 2000-2400 and then 0100-0900. This way the HUB doesn't freeze on you after you set it and the restriction is working.

And also and more importantly it works just fine with my 2 kidos, I havent have them yet finding out, that from midnight till one in the morning their Nitendo works...... muhehehe!

Hope this will help to you too.

therigler
On our wavelength
4,152 Views
Message 47 of 80
Flag for a moderator

I will give it a go. If this doesn't work we will be leaving Virgin in April

nrlincoln
Joining in
4,067 Views
Message 48 of 80
Flag for a moderator

I'm not a tech person at all, so please bear with me (and yes, I've googled things and read all five pages of this thread to date!)

I think I've enabled the MAC filtering, and have taken your advice about unblocking the witching hour between 0000-0100 (see grab below).

My question is two-fold. If our IDD (internet-dependent daughter) physically resets the router (I've not taken to locking the study door - yet): 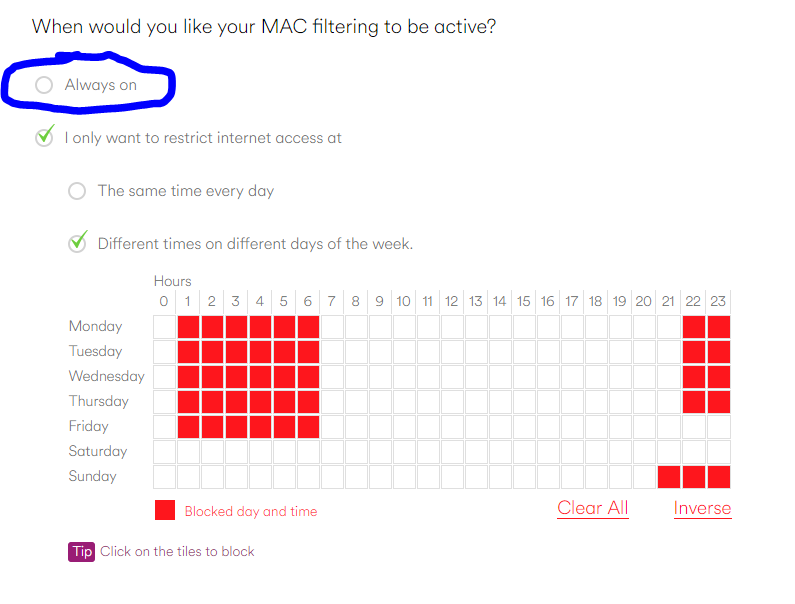 DreamOfCheese
Rising star
4,056 Views
Message 49 of 80
Flag for a moderator

If the Hub is physically reset it'll lose all settings and revert to the password printed on the underside of the unit. The Hub will work fine after reset without needing to go to the control panel.

It's worth remembering that someone with the desire to bypass the filtering will find a way.
MAC filtering is easily defeated by simply spoofing the MAC address of the network interface, most drivers allow this to be done without extra software these days.
0 Kudos
Reply
Highlighted

therigler
On our wavelength
3,994 Views
Message 50 of 80
Flag for a moderator

Are you sure this works? I've just tried it with my kids phones for filtering different times of the day but it still keeps them blocked permanently