I've just renewed my contract to the 100mbps package. At the time i was told that my download would be 20mb/s, however the contract I've received only says i'll be getting 6mbps as indicated below:

I've called back up today to be told to sign the contract anyway and ignore what it says as it will be 20mbps.

I've been monitoring my usage every 30mins over the last 24hrs and my max speeds hit are 111mbps down and 5.45mbps up - suggesting i'm getting as per contact not as discussed over the phone.

Are these speeds in line with what others would be expecting from this package? Have i been sold a lie? or should I be asking for some further technical support so I hit the expected speeds offered at renewal?

Details from my hub: 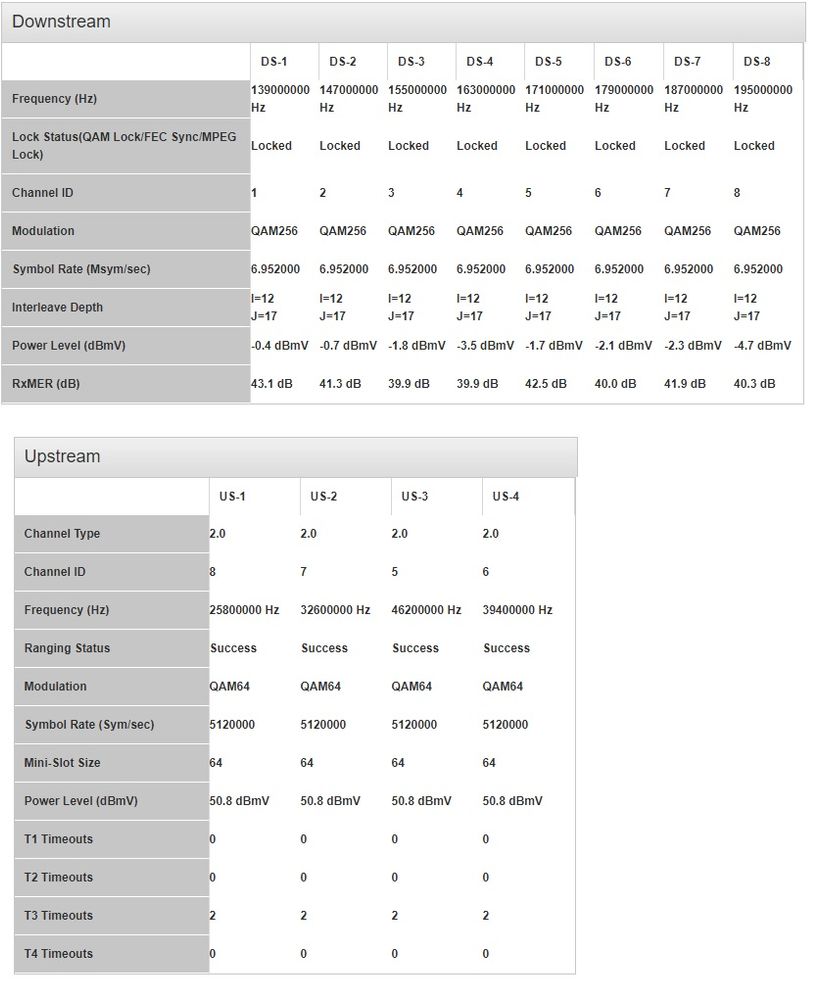 The 100Mb package provides about 110Mb down and 6Mb up so your speeds seem good, the upload is slightly lower than maximum but not far off.

The max upload speed on 100 is 6mbps. So that is correct. To get 20mbps you need to be on the 350 contract - did you change to that ? If so, it looks as if it hasnt been applied to your Hub. Call in again to check as they sometimes "forget" to do it or a digit can get mistyped. It should be instant once its gone to the Hub. You could try switching the Hub off for 5 mins and restarting to see if its waiting at the door ?

Thanks both for answering.

I've called again and they've insisted that it's 100down 20up. They went on to add that it's 20up on all packages but they just put 3, 6, 12 or 20 on the paperwork to differentiate the packages and that I will get 20up.

Sounds like some salesman BS to me so i've told them i'm not signing the contract until they send me one that represents the cost/upload speed they're quoting over the phone.
0 Kudos
Reply
Highlighted

Good call. More lies (or bad training) from offshore staff. Did they want to charge you any more £?

From my original contract to go to 100mb down/20up - yes, but they didnt try and up sell me any more earlier today as they said it didn't matter as it was 20up on all the packages.

I've started a switch to BT now and if they don't send me through a new contract with 20mb up written in it i'll cancel the service entirely and lose a 10+ year customer.

Thanks everyone for the reply's
0 Kudos
Reply
Highlighted

You are on VIVID 100 and getting download and uploads speeds which you are paying for.

Quick update and outcome, had a call today with a nice lady who confirmed there'd be some 'miss communication' and that the only way i'd get 20mbps upload is by being on VIVID 350.

She did what she could to offer me a decent deal on VIVID 350 but given what i've been through and the cost I declined so am set to leave. She also (unprovoked) offered to feedback to the agents managers who i'd previously spoken too the make sure the information they're giving in future is in line with the packages on offer.
0 Kudos
Reply