Since Sunday I have been experiencing very low upload speed, the worst being at around 0.01 Mbps according to speedtest.net.

0800 does not report any maintenance work anymore, but still the upload speed is much lower than expected.

Here is the latest speed test.

And here are the readings from my Superhub 3.

I'd very much appreciate if someone could shed some light on what's happening.

Re: Unusable low upload speeds all of a sudden

I am seeing the exact same problem in GU14.

When I do a Service Status check on my account, it returns as OK. But when I do the same on the postcode, it reports a fault in the area.

I called Customer Support about this, and they quote an expected resolution on 14/12/2021. They emphasise that many people in the area have reported this problem and that they are working on it. When pressed, they confirmed that there was some work being done in the area. Whether this is related to the 1 Gbps roll-out, I don't know.

Symptoms are exactly the same as yours: normal download speed, but upload is below 1 Mbps. Sometimes the upload goes back to normal but most of the day it exhibits the problem. This has been happening since Sunday evening.

This is getting ridiculous. The upload speed won't even register when doing a speed test. It's 0.0 Mbps on all speed tests.

Thanks for posting and welcome to our community 🙂

I've been able to locate your account using your forum information and can see you're currently affected by an area SNR issue.

the current fix date for this is 14th December 9am, if you're still experiencing connection problems after this date please let me know.

I'm curious about how these text messages go out, but they are comforting because they give me the impression that there is an actual human following up on the case (F009517571).

These are the speeds that I am getting and that I expect from Virgin Media as per the broadband speeds page. 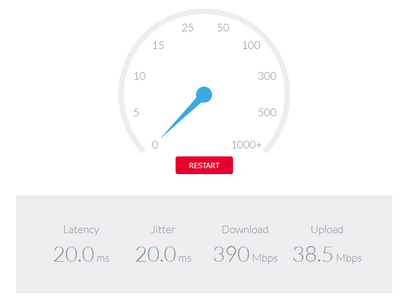 The packet loss seems to have gone down too (if you ignore the spikes caused by my recent speed tests at around 12.00 p.m. mark) according to the BQM chart below.

The power readings on my hub upstream stats page are also better (they were between 39 and 41 when the problem was manifesting), but the modulation readings are still not all at 64 qam. How does one correlate these figures altogether?

All in all, I am pleased that this is fixed for now and I can get a decent connection again for remote work. I just wish that we could get access to the very helpful local CS people like the person I spoke to this morning instead of the offshore people reciting scripts. I also wish Virgin Media was more transparent about area faults -- I think 'Check your service status' gives contradictory information most of the time.

Kudos to the person in CS who took my call this morning.