Recently became a new customer of Virgin Media for the M100 service, never been with any provider at any location before. After having many setbacks in getting the account setup the connection finally went live on 1st September (2020).

The engineer who delivered the quick start installation kit tested the signal and reported that it is very strong here and that the maximum speeds would be expected as stated on page three of the initial contract:

After running numerous speed tests over Cat 6 & Cat 5e cables via many providers including the one Virgin Media links to, the result thus far is massively consistent, the following being from AT&Ts speed test service: 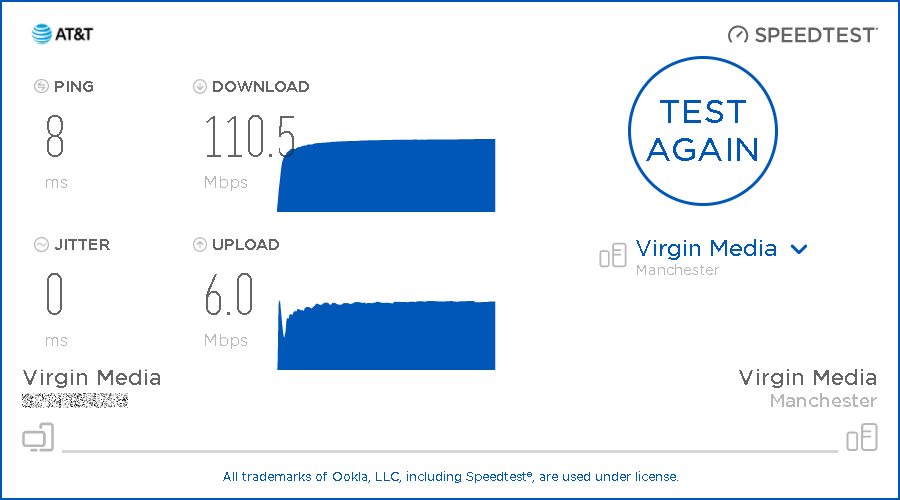 Every test has resulted in a solid 6 Mbps upload, less than contracted. Modem Mode along with rebooting and resetting have all been attempted, the coaxial cable to the wall has also been switched to rule out any issue with the equipment. Upon further research on Virgin Media Community the problem has been isolated to the actual provisioning config installed onto the Hub 3.0 by Virgin Media when the service went live: 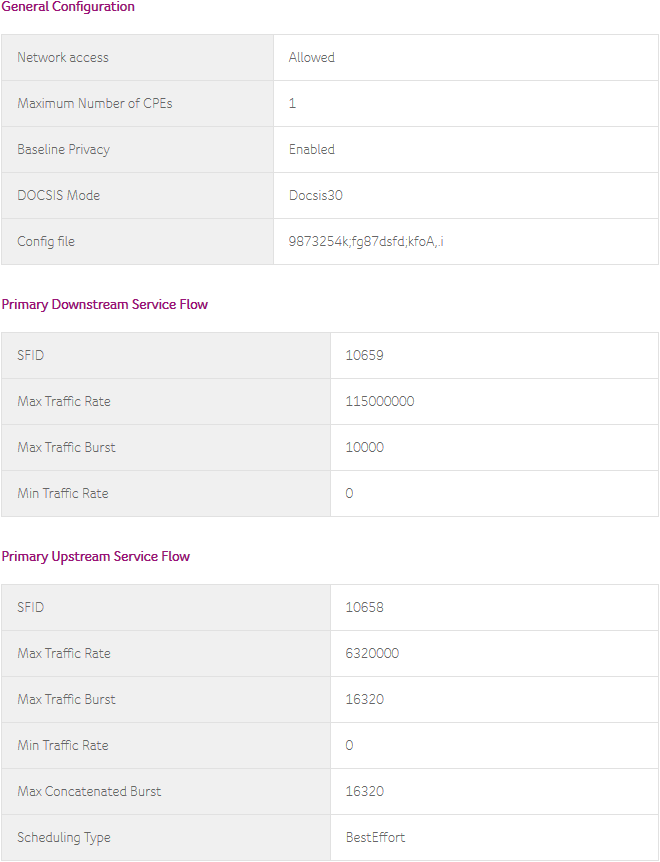 Thanks to user: MrHalfAsleep on page one of the relevant thread: Why do we get a 6mb upload speed cap?

It is made clear that the Primary Upstream Service Flow - Max Traffic Rate of 6320000 should be set as 10500047 as per the contractual agreement, also following an older service alteration made by Virgin Media over 1 year & 6 months before becoming a customer: 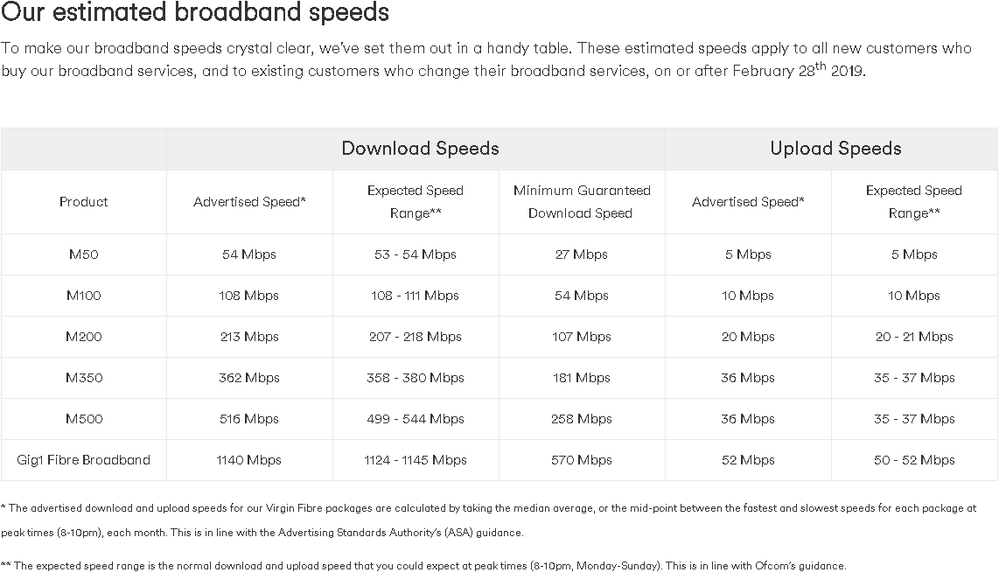 The current rate being received appears to be linked to a much outdated config file that simply needs an update down the line from Virgin Media to the Hub 3.0 correcting 6320000 to 10500047 upstream. While others have had this same issue, all have had the same experience when dealing with Tech Support over the phone; Slow upload speed continues , Upload speed , Why do we get a 6mb upload speed cap? - Page 2 , Not getting expected speed M100 , M100 Upload Speed at 6mbps But Should Be 10mbps (SH Configuration) , Upload speed is not as advertised - Page 3.

It appears that members of the Forum Team may have assisted in resolving the issue for others experiencing the incorrect config, though the threads involved seem not to include any success posts from those who reported the problem on the Virgin Media Community, following any direct messaging.

This is highly concerning, as a new customer there are many days remaining for contractual cooling off period, it may be prudent to report these findings to Ofcom as the provisioning config is a setting from Virgin Media, not a line issue. Essentially resulting in the paid service not being fully provided.

If a member of the Forum Team is able to resolve this issue then this will deserve absolute praise.

For further diagnostic information, Router Status is provided below: 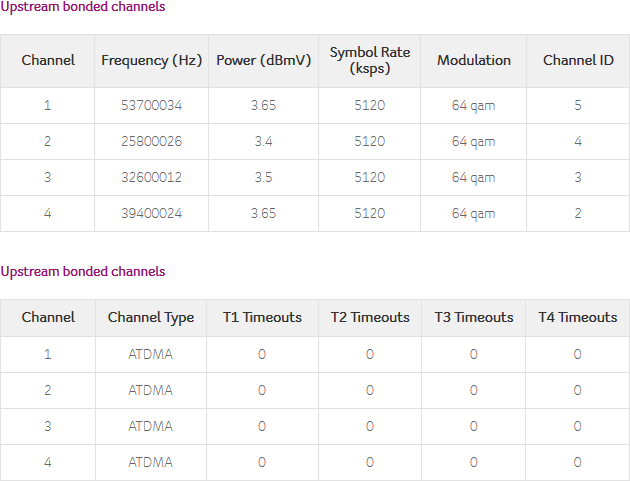 Wow.  There's overkill in a post to get a fairly simple configuration problem resolved, although you've certainly been researching this and covered all the bases.  I've flagged this for the forum staff, and they'll respond as soon as their workload allows.

Apologies for the problems you've had with your upload speeds. Checking things over from here everything appears to be fine, so this will require a technician visit to be corrected. I have booked you in with the next available appointment - you will find the appointment time slot via your online account (virg.in/myVM) and it can also be rescheduled or cancelled from there if needed.

Please keep us posted with how that goes, or if there's anything else we can help with in the meantime.

What will the Technician do (or attempt) in order to resolve the issue? @Tom_F

Surely anything other than using a secret engineers login on the router that unlocks the fixed parameters allowing them to be manually corrected or forcing the provisioning config file to be updated through the line onto the router would leave the problem unresolved.

I'd be lying if I said I knew the answer to that - however I know it's not something we're able to fix directly from here and when seeking advice this was the suggested course of action. I'm confident the engineer will know how to fix it but please keep us posted on that if you can.

The technician who arrived initially admitted to having never been confronted with this issue before, however he did contact several departments and provided a new Hub 3.0 fresh in the box to switch with the one provided by the first engineer who delivered the quick installation kit within a bubble wrap bag on 27th August. The technician who provided the new router informed that any router provided in bubble wrap tends to be a refurbished Hub 3.0. While sceptical that the replacement would resolve the issue as the provisioning config file is installed onto the router when connected to the network, a new router may have been delivered the correct package parameters.

This has not been the case.

Upon fitting the replacement and initialising the new router, the same incorrect provisioning config installed onto the new Hub 3.0: 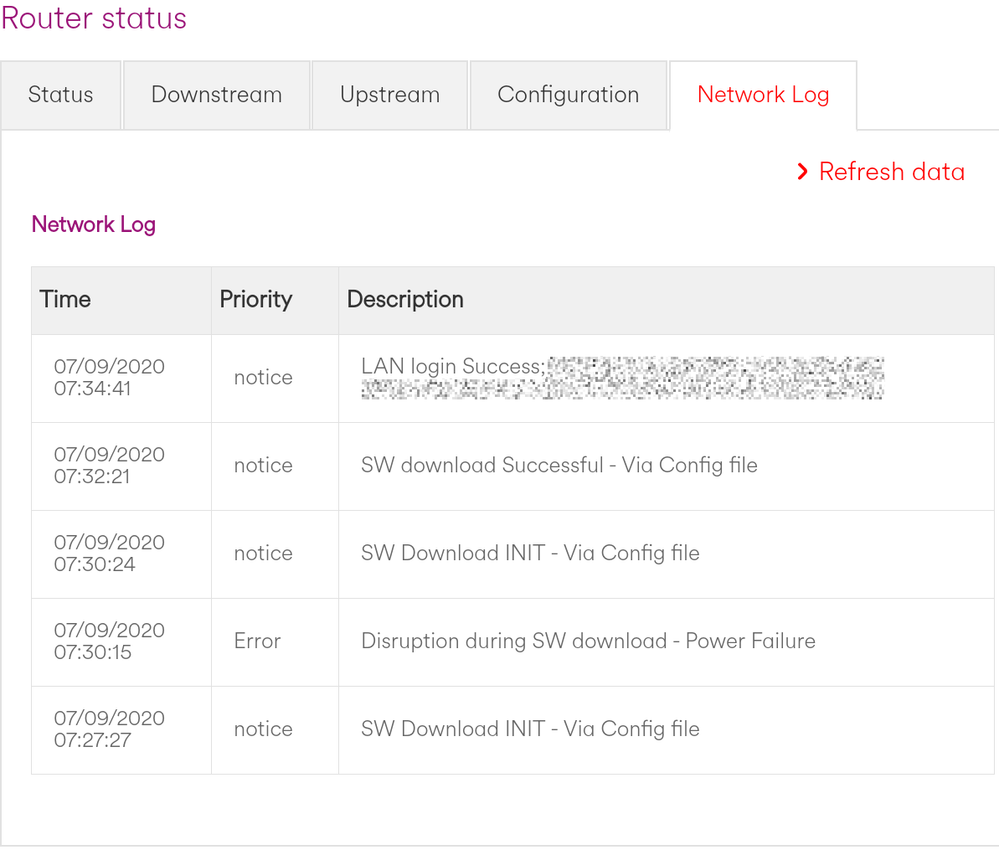 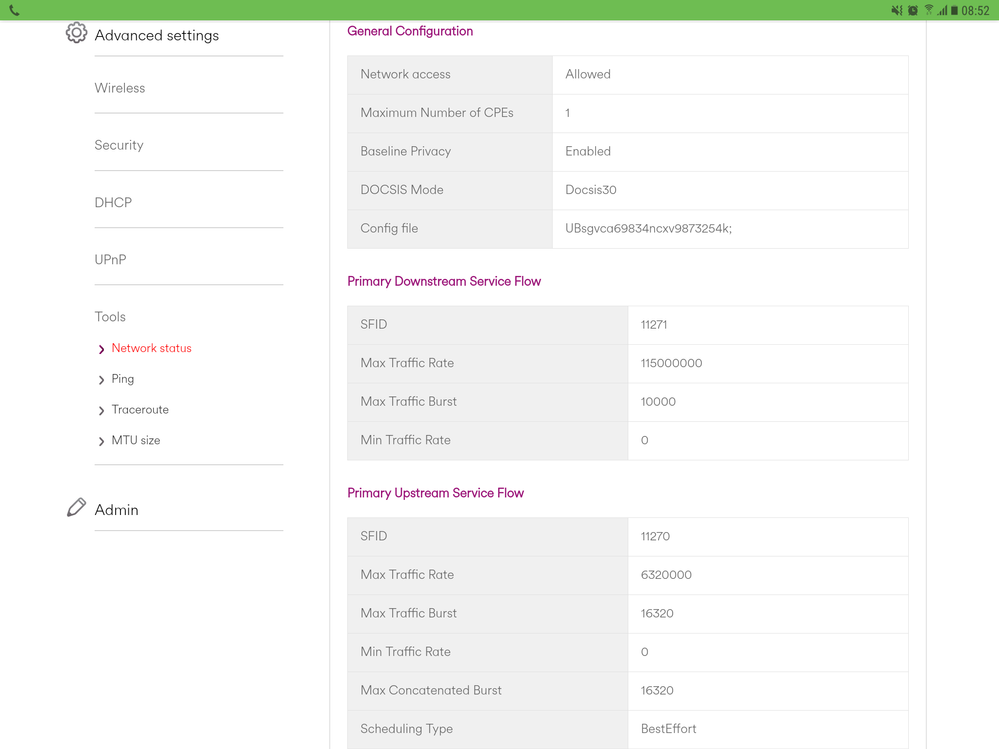 The technician himself confirmed that the 'Max Traffic Rate' of the Primary Upstream Service Flow on the account setting itself has been "capped" incorrectly after directly contacting the service departments responsible for the upstream provisioning config setting, confirming all discovery made here.

He explained that upon account creation a setting is triggered by the network staff in relation to the package based on the contracted service that then causes the "Cable Modem Termination System" (CMTS) to automatically deliver the 'SW Download INIT - Via Config File' to the Hub 3.0 once it goes live. Problem is that the automatic system delivered the wrong and outdated package profile that Virgin Media confirm should not exist anymore.

The departments the technician contacted are:

He confirmed that nothing on the customer end can be done to rectify the issue as the problem exists solely with the account settings profile that is remotely installed onto the router automatically and requires rectification. Fortunately for the sake of convenience the technician returned with the original router provided later the same day in order to switch them back, this saves a headache as many family members already signed into the previous Hub 3.0. There had been no other differences so this did help save time.

Then he informed that the Networks Department were to contact directly within the same hour he returned with the previous router (between 2-3pm) in order to confirm several account details to begin resolving the issue, if they did not ring then the technician were to be contacted again to check up on their status. By 4pm no call had been received, the technician contacted back to say the department itself closes at 4pm and therefore were likely to call the next day just after opening.

Before midday the following day the technician had to be recontacted as the Networks Department had still not contacted directly at all, he said over the phone that he would send them an e-mail in order to once again check up on their status and to remind them of the issue that needs resolving and that they were to ring on that day. At 3:10pm less then one hour before the department is set to close, one more message is sent to the technician asking if there is a direct contact number for the department so that we may proceed in confirming the account details in order to have the issue fixed; this time, no response is given.

It is highly questionable whether this is simply a longstanding mistake with packaging provisioning from Virgin Media or an actual scandalous practice in short changing customers as with the beginning of this forum post it is clear than many others have been a victim of the incorrect provisioning config being delivered. The problem has however been further isolated, all that is required now is for the correct department to be put in direct contact as at the moment the issue is still unresolved.

Thank you for your post. I'm sorry to hear that you've been having these issues and that the tech visit hasn't helped. I've had a look in to this and we will need to log an IT ticket to get this resolved for you.

I'll private message you now so that I can take some details and get this sorted for you.

I've messaged you regarding your It ticket however wanted to ensure that anyone else visiting the page knows what to do if they face this issue.

So it wouldn't be a tech visit but an IT ticket. I have logged this for you and will be back in touch when resolved. Any issues with the hub like this would need a ticket raising so would need to contact us to get this raised.