A month ago I upgraded from the M350 to the M500 service. I never had a problem, speed wise on the 350 service. Initially after the upgrade I was getting 500+ using speedtest and Fast. then after 1 week the speeds progressively dropped and now I am getting around 300Mbps. This is on a PC that is hardwired into a GB Switch that is connected to the router. I have tried connecting directly into the router and the results are the same.
I have of course checked the service status and have powered off and on all my devices including the router. Connecting wirelessly on a iPhone 11 sat next to the router and the speed is only 300Mbps.

Please can I go back to my old M350 service to get my speeds back to what they were .

Thanks for your post and I’m really sorry to hear that you are having an issue with the speeds of your broadband service.

I've taken a look at the account today at the Hub stats and can see the power levels and signal levels look good. There are a few timeouts recorded but the Hub has been on for over 27 days so please do a hard reboot on your Hub by switching it off at the mains. Leave off for a few minutes and then turn back on. This should refresh things for you. If you are still having an issue with the connection then feel free to come back to us for us to run further checks with you.

To help with the speed on your hardwired connection, please make sure the ethernet cable is a cat 6 and this link should help optimise the WiFi performance: WiFi hints and tips

Pop back and let us know how things go.

Hi Cath. Thank you for your reply and suggestion. I did a hard reset of the hub, speeds still the same, about 360Mbps download speed. I then strung a length of Cat 6 cable directly from the PC to the router. Speeds still the same. Thinking it was the router that was the issue I bought a 3 node TP-Link Deco M9 Plus Mesh system, putting the router in modem mode then testing again. The greatest speed I get is 372Mbps, wether wireless or using the Cat6 cable, as recommended. 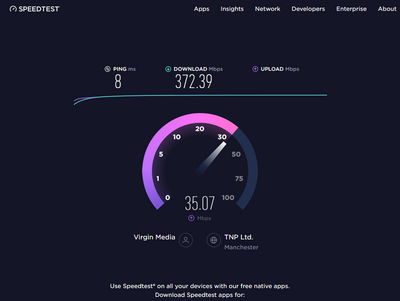 As mentioned originally, when I first upgraded I was getting over 500Mbps on both wireless and wired networking.

Thanks for coming back to me on this one 🙂

I'm really sorry that nothing I suggested has helped. As you are using some third party equipment can you please take this out of the equation.

If you can connect the Hub to your PC or Laptop. Reboot your hub and start your device in safe mode with networking. Try the speed test again through speedtest.net and post the photograph results here.

As well as the speed drop, do you have any issues with disconnections or is it only the slower speeds?

Hi Cathy. Since we last spoke I have tried numerous tests. I reset and rebooted the router. I turned OFF wifi on the router all I had connected into the router was one short CAT6 cable connected to a PC. When I ran speed test the maximum speed I was getting was 360Mbs'(ish) upload and between 26 and 32 Mbps upload speeds. I then put the Hub3 into modem mode and connected the TP-Link M9 Pro Mesh system. Using TP-Links as the router. I am now getting the following speeds consistently.

The results are more than acceptable. My conclusion is that it is the Hub 3 that is the limiting factor. Possibly a fault has developed on the hub. Not need to change it as everything is working great with it in modem mode. Just a pity I had to spend quite a lot to diagnose this issue.

Thank you for confirming this @Tattyfield,

I am sorry about the issues with using the Hub out of modem mode.

I can see you have mentioned it is working great for you while using is in modem mode, are you still looking for assistance with this?

Look forward to your response.

I have now been running a few days with the router in modem modem and I am still getting consistently good speeds of above 500Mbps download and 36Mbps upload. I am not sure if replacing the Virgin router would sort the issue? Either way I am willing to try, if you think that would help or stay with the current router running in modem mode and use the TP-Link M9 Plus mesh system as the router.

Thank you for confirming this @Tattyfield.

I would keep the set up you have at the moment, you are getting over half of the guaranteed speeds at the moment.

I do not recommend you use anything else.

I hope this helps.